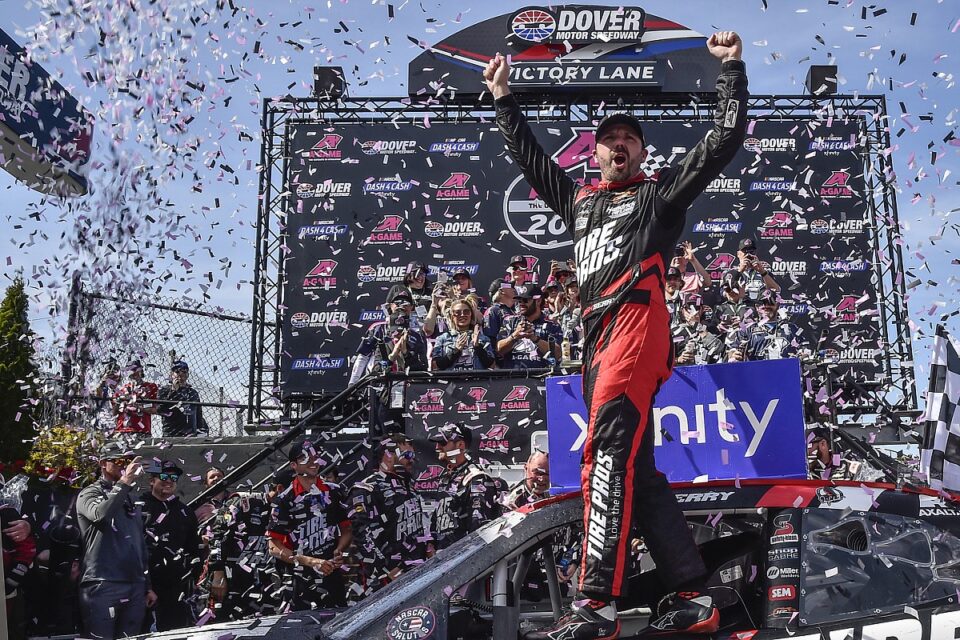 It was the third victory of Berry’s career, crossing the finish line six tenths clear of his JR Motorsports teammate Justin Allgaier.

“I think if you watch that back, you’ll think that I look like a weapon at the beginning,” Berry told FS1 after the race.

“I struggled a lot on the bottom on the restarts. Just kept trying to work and get better. It’s just such a credit to these guys … The pit crew did a phenomenal job today. They executed when we needed it and we were there when it counted.

“Both times I’ve raced here, I went toe-to-toe with Justin (Allgaier) the whole time. He is so freaking good here. I thought he was kind of out of it after that pit stop, and then he’s right back up to second. I’m like here we go again.”

Berry held the lead through the final restart, which came with 34 laps to go. Allgaier, who lost a few spots on pit road, quickly moved back up into the runner-up position. However, he was not able to run down Berry.

Stage 1 Jones led the race from pole position, holding off all challengers at the start.

Jeremy Clements and David Starr tangled on the frontstretch, bringing out the first caution of the race.

With about 15 laps to go in the stage, Jones finally lost the lead as Mayer made his way by. He went on to take the stage win ahead of Allgaier, Berry, Jones, John-Hunter-Nemechek, Gibbs, Allmendinger, Gragson, Herbst, and Creed.

Stage 2 The excitement from winning the opening stage did not last for Mayer, who left pit road with loose lug nuts and lost the left-rear wheel before he could make his way back in. That will result in a penalty from NASCAR next week.

On the restart, Jones was back in command. Behind him, the eventual 1-2 finishers nearly wrecked as Bery got loose under Allgaier.

Rajah Caruth slowed with an issue and was forced to exit the race in what was just his second NXS start.

As the leaders found traffic, Allgaier saw an opportunity. While Jones and Gibbs battled through the slower cars, Allgaier was able to find a way past both of them and into the race lead.

John-Hunter Nemechek then fell out of the race with brake failure.

With two laps remaining in the stage, Mason Massey crashed and brought out the caution. The stage ended behind the pace car with Allgaier leading. He was followed by Jones, Allmendinger, Berry, Gibbs, Herbst, Gragson, Hemric, Creed and Hill.

Stage 3 Jones was forced to start the final stage from the back of the field after having to return to pit road to tighten the lug nuts. Mayer was also caught speeding.

Allgaier had control, but Berry briefly put up a challenge as the race went back green.

Stefan Parsons spun, bringing out the caution flag. Later, the JR Motorsports teammates battled through traffic as they went back-and-forth over the race lead. After a fierce fight, Berry prevailed.

He would never give the lead back, leading a total of 55 laps on his way to the race win.

One dead, 4 injured in shootout at Mississippi Mudbug Festival