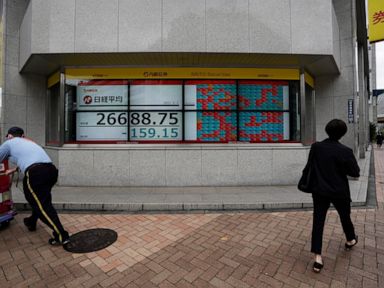 NEW YORK — U.S. markets floundered ahead of the first trading day of May following a brutal sell-off in tech stocks last month when widespread tech sell-offs dragged down major indexes.

After futures pointed higher in early trading, the S&P 500 slipped 0.3% and the Dow Jones Industrials fell 0.1%.

Trading was closed for a holiday in China as well as many other Asian markets, and Britain.

Anxious traders await another expected rate hike this week from the Federal Reserve as it tries to tame four-decade high inflation. Another round of rate hikes will further increase borrowing costs across the board for people buying cars, using credit cards and taking out mortgages to buy homes.

On Friday, steep losses for technology stocks pushed the S&P 500 down 3.6% while the tech-heavy Nasdaq Composite fell 4%, finishing April down 13.3% in its biggest monthly loss since 2008.

“The reality is that sentiment around equity risk is horrible: and Bull/Bear reading shows bulls have never been worse off,” Stephen Innes of SPI Asset Management said in a commentary.

“As a result, we are in an incredibly fragile market that is delivering outsized moves on shallow levels of liquidity – especially in Tech, where growth is getting slammed,” Innes said.

A report showing pandemic lockdowns have hurt factory activity in China, a main regional driver of growth, was a fresh source of concern.

The monthly purchasing managers’ index, released over the weekend by China’s National Bureau of Statistics, fell to 47.4 in April, down from 49.5 in March on a 100-point scale. Numbers below 50 show activity contracting.

Some enterprises have reduced or stopped production, with disruptions in logistics as well as the supply or raw materials and components.

Residents of Shanghai, China’s most populous city, spent most of April under lockdown. The capital, Beijing, is mass-testing millions of residents.

Japan’s benchmark Nikkei 225 declined 0.1% to finish at 26,818.53. Tokyo trading will be closed Tuesday through Thursday for national holidays, reopening on Friday.

EU energy ministers were to meet to discuss Russia’s decision to cut gas supplies to Bulgaria and Poland and debate a sixth round of sanctions over Moscow’s war on Ukraine.

The energy ministers were also planning to look at what steps to take if Russia ramps up its pressure by cutting gas supplies to other countries.

The Main Benefits of SEO Content Writing for New Businesses

Casey White and Vicky White’s 11 days on the run: Summary and timeline