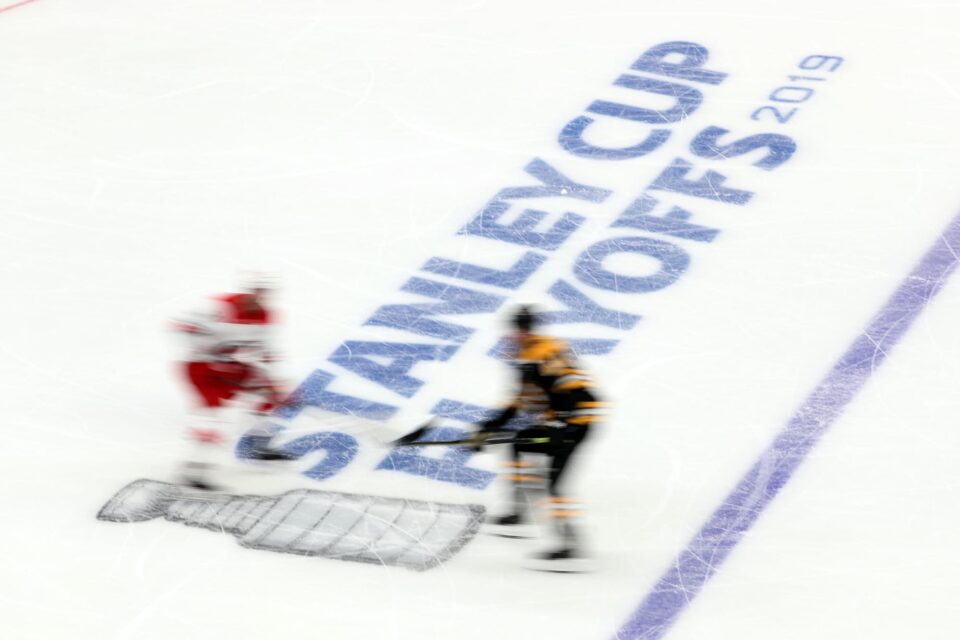 BOSTON, MASSACHUSETTS – MAY 09: Players skate over a 2019 NHL Stanley Cup Playoffs logo on the ice during the second period in Game One of the Eastern Conference Final between the Carolina Hurricanes and the Boston Bruins during the 2019 NHL Stanley Cup Playoffs at TD Garden on May 09, 2019 in Boston, Massachusetts. (Photo by Adam Glanzman/Getty Images)

The first round of the NHL’s Stanley Cup playoffs began on Monday, May 2. Here is how many games you can expect in the opening round.

The NHL’s Stanley Cup Playoffs are perhaps the most exciting in all of professional sports. 16 teams are vying to be the last team standing holding Lord Stanley’s Cup over their heads.

Monday, May 2 was the official start to the Stanley Cup Playoffs, featuring the Toronto Maple Leafs vs. the Tampa Bay Lightning, the Carolina Hurricanes vs. the Boston Bruins, the Minnesota Wild vs. the St. Louis Blues and the Los Angeles Kings vs. the Edmonton Oilers.

For those wondering how many games are played in the first round of the playoffs, we have you covered.

NHL Playoffs format: How many games in the first round?Each first-round series is best-of-seven games, meaning the first team to reach four wins will advance.

This is not only the format of the opening-round but for the entire Stanley Cup Playoffs.

Here are the other first-round matchups of the NHL playoffs:

New Zealand rocket caught but then dropped by helicopter

The woolliest words in business