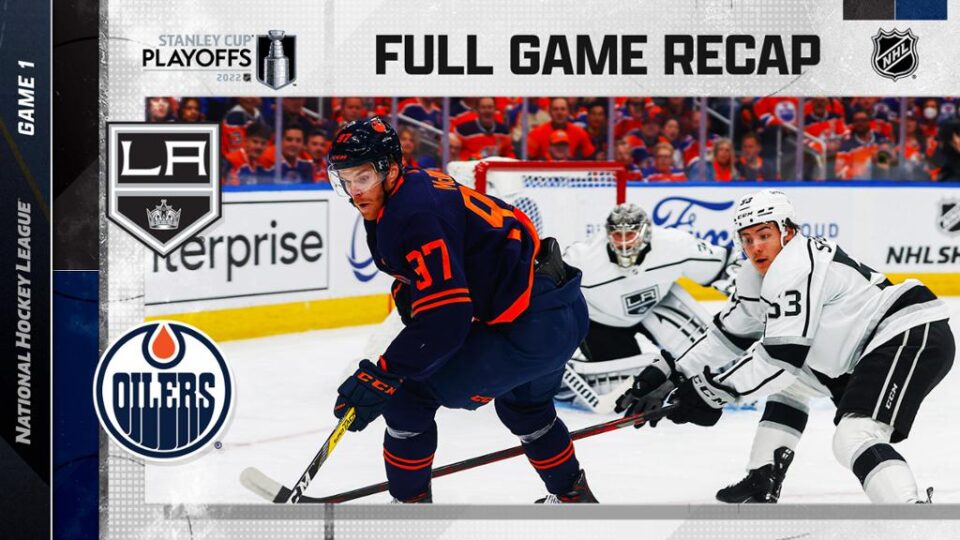 EDMONTON — Phillip Danault scored the go-ahead goal in the third period to give the Los Angeles Kings a 4-3 victory against the Edmonton Oilers in Game 1 of the Western Conference First Round at Rogers Place on Monday.

Danault scored at 14:46 of the third, moments after Oilers goalie Mike Smith turned the puck over attempting to clear it up the middle, which was knocked down by Alex Iafallo.

Following a scramble in front, the puck came to Sean Durzi at the point, and his shot went in off Danault.

“I was just trying to make something happen; obviously trying to do too much there,” Smith said. “In a tight game like that you can’t afford to make mistakes like that. It ended up costing us the game. Obviously disappointed, but it’s one game and we move on.”

Trevor Moore had a goal and two assists, Iafallo had a goal and assist, and Jonathan Quick made 36 saves for the Kings, the third seed in the Pacific Division.

Game 2 of the best-of-7 series is in Edmonton on Wednesday.

“I think obviously no matter how it’s ending, if you have one more goal, that’s the best ending,” Danault said. “We stuck with it. They came back in the game and they had a good PP. I think we showed the character again tonight and we stuck with it and big win.”

Kailer Yamamoto and Connor McDavid each had a goal and assist, and Smith made 31 saves for the Oilers, the second seed in the Pacific.

“There’s lots of emotion with fans back in the building and I thought we just didn’t handle it all that well; they got the jump on us,” McDavid said. “I thought we did a great job of getting ourselves back in the game and giving ourselves a chance. Ultimately it’s one bounce. We didn’t have a great start. We gave up a few chances and found ourselves down by two. It wasn’t a good enough start in our home building. It’s something to work on.”

Moore gave the Kings a 1-0 lead at 11:00 of the first period. He took a pass from Iafallo and scored from the high slot.

McDavid made it 2-1 at 19:17. He got around Kings defenseman Olli Maatta down the right wing, cut inside and scored from the right face-off circle.

Yamamoto tied it 2-2 on the power play at 2:39 of the second period, re-directing in a pass from Duncan Keith.

“I liked our special teams, I thought our power play kept us in it,” McDavid said. “I liked how we battled back in the game; we didn’t quit on it. There are things to like and things to not like. We’ll learn from it and apply it in Game 2.”

Brendan Lemieux restored the Kings lead at 3-2 at 3:50. He took a pass from Adrian Kempe on the rush and scored from the high slot.

“I thought we did the things we needed to do for the most part,” Kings coach Todd McLellan said. “We’ve used the word ‘identity’ a lot during the year and we played to that again. It’s what gives us a chance.”

Leon Draisaitl tied it 3-3 on the power play at 9:56. He took a pass from McDavid at the right face-off circle after it hit a broken stick on the ice and picked the corner on Quick.

“I didn’t love the way we started the game, obviously, we gave up a chance off a neutral zone face-off we took an early penalty, those type of things that allowed them to feel good at the start of the game,” Oilers coach Jay Woodcroft said. “I thought we worked our way into things and found a way to compete in the end it came down to an error in the third period and they capitalized on it.”

NOTES: Viktor Arvidsson did not play for undisclosed reasons. “Obviously couldn’t go tonight, we’ll see how he is tomorrow,” McLellan said. … Oilers defenseman Darnell Nurse was back after missing the last four games of the regular season with a lower-body injury. Nurse had an assist in 20:27 of ice time. “There was some good stuff from Darnell tonight,” Woodcroft said. “Obviously, he’s been off the ice for a little bit over a week and there are moments where he’s just getting back up to speed. We tried not to overuse him tonight, but he was competitive and he’s very good on our penalty kill.”

Raanta, Hurricanes defeat Bruins in Game 1 of Eastern First Round

Woman fatally shoots her 2 children, self in Gresham