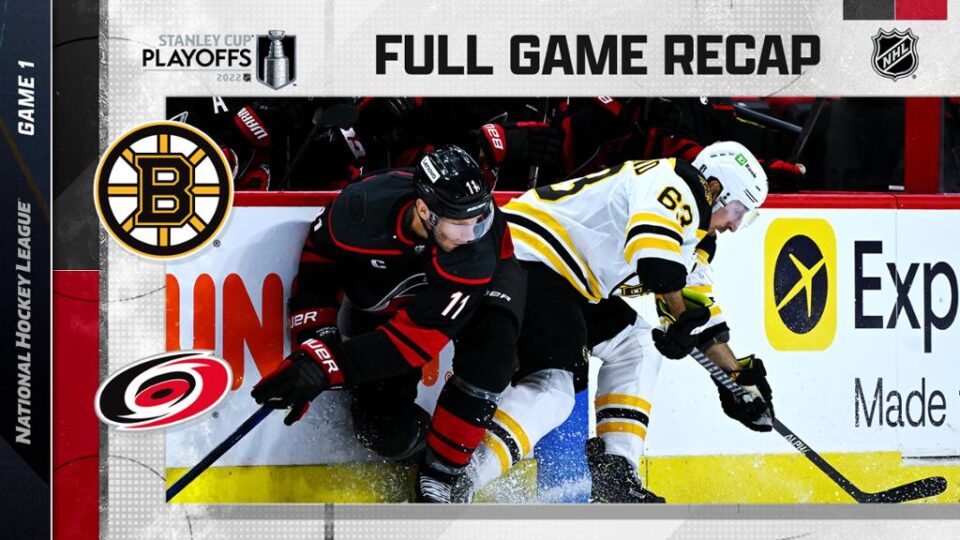 RALEIGH, N.C. — Antti Raanta made 35 saves in his first Stanley Cup Playoff start, and the Carolina Hurricanes defeated the Boston Bruins 5-1 in Game 1 of the Eastern Conference First Round at PNC Arena on Monday.

“For me, it was obviously the first start in the playoffs in the NHL,” Raanta said. “I was just trying to focus on the things that have (allowed me) to be successful. It was working nicely. But it’s only one game, one win, and now it’s just regrouping and getting ready for Wednesday.”

Game 2 will be played here on Wednesday.

Raanta got the start in place of Frederik Andersen, who played 52 regular-season games (51 starts) for the Hurricanes but missed the final six with a lower-body injury and was ruled out on Sunday. Raanta entered the game with five career relief appearances in the postseason, two with the Arizona Coyotes in 2020 and three with the New York Rangers in 2016.

“‘Rants’ played really well, made some big save,” Hurricanes coach Rod Brind’Amour said. “Then we got our game going a little bit in the second.”

Vincent Trocheck and Seth Jarvis each had a goal and an assist, and Nino Niederreiter, Teuvo Teravainen and Andrei Svechnikov scored for Carolina, the No. 1 seed in the Metropolitan Division.

Taylor Hall scored for Boston, the first wild card in the East. Linus Ullmark made 20 saves in his playoff debut.

The Bruins outshot the Hurricanes 9-1 in the first six minutes. Carolina defenseman Brendan Smith cleared a puck from the goal line after Craig Smith’s shot at 5:03 trickled behind Raanta, who then stopped consecutive shots 32 seconds later against Derek Forbort and Charlie Coyle to keep the game scoreless.

“Their goalie made saves, and there’s some pucks around the front of the net we just couldn’t locate or take the right path to, but they were there,” Bruins coach Bruce Cassidy said. “[Raanta] is paid to play, too, and he did a good job and he held them in the game early on. … We were ready to play, just couldn’t put anything in the net early on.”

Jarvis, a 20-year-old rookie, gave Carolina a 1-0 lead at 16:28 of the second period when he tipped Jaccob Slavin’s one-timer from the right point.

Niederreiter extended it to 2-0 at 18:38 on a wrist shot from above the left face-off circle through a screen by Jordan Staal.

“There was a lot of net-front going on with Jordan,” Niederreiter said. “When he’s the big man in front, nobody sees anything. I was just trying to get the puck to the net and luckily it went in. It was definitely a big goal.”

Hall cut the lead to 2-1 at 2:53 of the third period with a one-timer from between the circles off a pass from Erik Haula, who was behind the net, but Teravainen made it 3-1 at 7:02 when he took a pass from Trocheck on a 2-on-1 and shot under the crossbar.

“The Teravainen goal was really big,” Brind’Amour said. “I don’t think we had much action going on, and they were kind of coming. That settled it down a little bit for the rest of the game.”

Trocheck then extended it to 4-1 at 16:59, banking a backhand shot off Ullmark’s mask from the goal line.

“The (fourth) goal wouldn’t have mattered, short side,” Cassidy said. “[Ullmark] is going to tell you it’s not a great goal to give up, but by then it’s 4-1, so we’re not going to put anything on Ullmark. Whatever goalie is in there for us, you got to fight to find pucks in this series.”

Svechnikov scored an empty-net goal with 2:01 left for the 5-1 final.

“They do play a really good playoff-style of hockey, and I’m sure that they’re really looking forward to trying to beat the Bruins,” Hall said. “It’s been a couple series now that that hasn’t gone their way, and they play playoff hockey, so it’s going to be a long series no matter what happened tonight.”

The teams are meeting in the playoffs for the third time in four seasons. Boston swept Carolina in the 2018-19 Eastern Conference Final and won in five games in the first round in 2019-20.

NOTES: Bruins defenseman Charlie McAvoy had an assist and played a game-high 24:08. … Jarvis finished the regular season on a seven-game point streak (three goals, four assists) . … Slavin has 20 points (two goals, 18 assists) in his playoff career, tying Dave Babych for the most by a defenseman in Hurricanes/Hartford Whalers history. … Raanta is the third goalie in NHL history to make five playoff appearances in relief before starting a game, joining Peter Budaj (five games) and Juuse Saros (seven games).

What’s The Difference Between VR And AR?