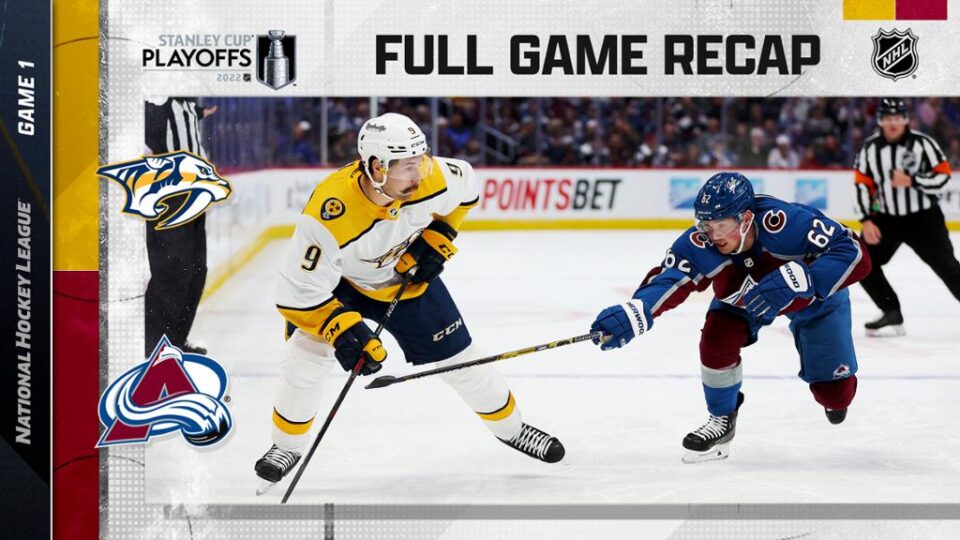 DENVER — The Colorado Avalanche scored five goals in the first period of a 7-2 win against the Nashville Predators in Game 1 of the Western Conference First Round at Ball Arena on Tuesday.

“I felt like we played exactly the way we wanted to play,” Avalanche coach Jared Bednar said. “We were using our speed, we were on pucks quickly, guys were forechecking hard, we were aggressive, and we defended real well. So a good 200-foot effort from our guys. It was really nice to score early.”

Matt Duchene scored twice for Nashville, which is the second wild card from the Western Conference. David Rittich allowed five goals on 13 shots before being replaced by rookie Connor Ingram, who made 30 saves in just his fourth appearance this season.

“We lost the game. We weren’t good enough. They were better than we were tonight,” Predators coach John Hynes said. “I think we hurt ourselves in certain areas that are easily correctable, and I think we have a better game on the ice. We will be better in Game 2 than we were in Game 1.”

Game 2 will be played here Thursday.

MacKinnon gave the Avalanche a 1-0 lead at 2:20 of the first period, scoring with a one-timer off a bumper pass from Rantanen on the power play.

Devon Toews scored on a wrist shot from low in the right face-off circle 22 seconds later to make it 2-0.

“We talked about it beforehand, about coming out to a fast start and playing our game, and that was us getting rewarded,” Landeskog said. “Nobody was cheating. We weren’t hanging on the wrong side of the puck trying to create scoring chances. We were just sticking to our game, playing hard and playing fast, and we ended up getting some scoring chances and we were able to capitalize on a lot of them. Obviously, that led to a big first period for us and kind of carried that through this game.”

Andrew Cogliano pushed it to 3-0 at 8:30 with a shorthanded goal. Mattias Ekholm dropped a pass to no one in the defensive zone, and Cogliano got his own rebound and scored near the right post.

“That definitely got all of us on our feet,” Makar said. “I think that was his first one with us, too.”

“Just kind of a weird pop-out puck there, and I saw an opportunity to take it down the wall,” Makar said. “Most of the time I don’t try and shelf those, but I just felt like I had that opportunity there, and luckily it bounced off his helmet. So a little bit of a lucky one, but fun.”

Landeskog, who was making his return after missing the final 23 games of the regular season because of knee surgery, was credited with the goal that made it 6-0 at 14:44 of the second period after Mark Borowiecki knocked the loose puck into the net during a power play.

“We have a lot of character. We got a lot of great leadership. We’re tight,” Duchene said. “We’re family first, and it’s one of if not the tightest team I’ve ever been on. We have a lot more pride than what we showed tonight. We’ve always bounced back this year, so we’re going to need to do that Thursday. That’s a team over there that wants to win the Stanley Cup and believes they can. We have to stand in there a lot better.”

NOTES: Cogliano left the game in the third period with an upper-body injury and is day to day. His goal was his first with Colorado since being acquired in a trade with the San Jose Sharks on March 21. … The Avalanche tied their playoff record for most goals in a period. They also scored five in the first period of Game 5 of the 2020 Western Conference Second Round against the Dallas Stars. … MacKinnon and Toews’ goals were the fastest two to start a playoff game in Avalanche/Quebec Nordiques history (2:42). … Landeskog, MacKinnon, and Rantanen have each factored in on the same goal 12 times in the playoffs, the second most by a trio in Avalanche/Nordiques history, behind Peter Forsberg, Valeri Kamensky, and Claude Lemieux (14).

3 Keys: Predators at Avalanche, Game 1 of Western First Round

Markstrom, Flames shut out Stars in Game 1 of Western First Round

Picasso portrait of lover as a sea creature sells for $67.5M in New York auction