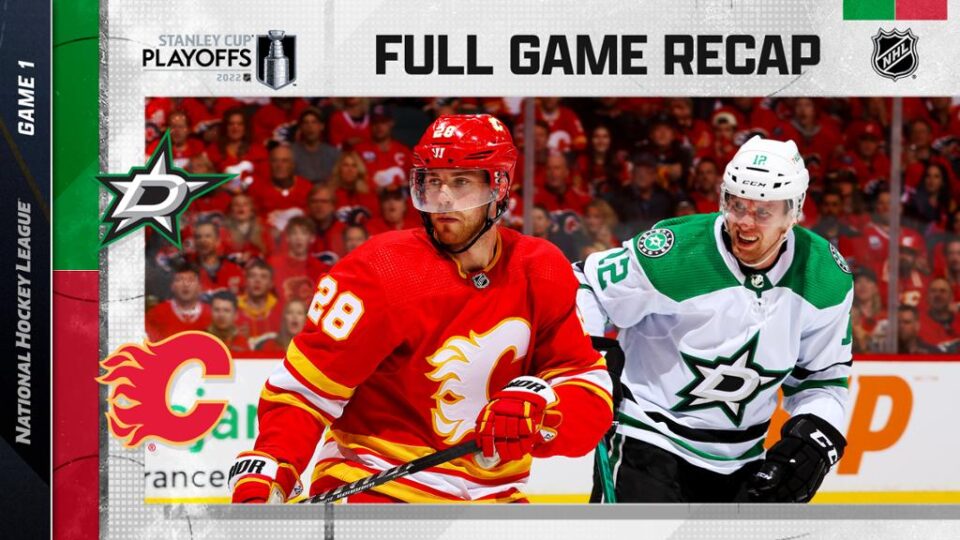 CALGARY — Jacob Markstrom made 16 saves for the Calgary Flames in a 1-0 win against the Dallas Stars in Game 1 of the Western Conference First Round at Scotiabank Saddledome on Tuesday.

Markstrom led the NHL with nine shutouts in the regular season. It was his second career postseason shutout and first since Aug. 6, 2020, when he made 27 saves for the Vancouver Canucks in a 3-0 victory against the Minnesota Wild in Game 3 of the Stanley Cup Qualifiers.

“He was solid,” Calgary defenseman Erik Gudbranson said of Markstrom. “He was really solid. There were moments in the game when he needed to be sticky and he was sticky and got a whistle for us. I mean, we trust him. He’s a great goaltender.”

Elias Lindholm scored the only goal of the game for the Flames, the No. 1 seed in the Pacific Division.

Game 2 will be played here Thursday.

“I think it was an emotional game, a tight checking game, but it’s just one game,” Calgary forward Blake Coleman said. “I said it going into the playoffs, it’s going to be a marathon, not a sprint. We have to find ways to learn from our mistakes in these games and then find ways to build on things we did well and obviously that will be what we work on tomorrow. I’m sure the staff will have us prepared and ready to go for Game 2.

“But I think that’s the beauty of this team; we can play whatever way you want. We can rough it up a little bit, we can make plays, we can defend, we have great goaltending. Whatever the game calls for, we can meet that challenge.”

Jake Oettinger made 25 saves in his first NHL playoff start for the Stars, the first wild card in the West.

“You can’t get too high or too low in the playoffs here,” Oettinger said. “I think we feel that we didn’t play our best game and we lost 1-0, so I think we should feel confident about that. I know the guys are going to respond and play even better the next game.”

Video: DAL@CGY, Gm1: Lindholm a buries one-timer for a PPG

Lindholm scored at 5:01 of the first period when he one-timed a pass in the slot from Matthew Tkachuk on the power play to make it 1-0.

“It’s always nice to help the team that way, but overall from our side, I think we can play better,” Lindholm said. “Our line (Lindholm, Tkachuk, Johnny Gaudreau), there was not much going on out there. It was a tight game. Both teams played good defensively. There wasn’t a lot going on out there, but we found a way.”

Calgary outshot Dallas 9-0 in the first 11 minutes. The Stars got their first shot at 11:06 on a tip from Tyler Seguin, and their second shot came at 16:15 on a Jamie Benn dump-in from the neutral zone.

“I thought they came out flying. The building was electric,” Dallas forward Michael Raffl said. “It was an awesome atmosphere to be in. They took it to us, especially the first 10 minutes. After 10 minutes, the bench calmed down and you get used to the speed because it was fast. They were good in the first.”

Markstrom made a blocker save on a partial breakaway from Esa Lindell at 12:28 of the second period.

“He was outstanding. His first playoff start,” Stars coach Rick Bowness said of Oettinger. “People forget this. He started the year in the minors (with Texas of the American Hockey League). We had (Ben) Bishop, we had (Braden) Holtby, we had (Anton) Khudobin. None of those guys are around. Now we’re going with Jake.

“That’s his first start, and for his first NHL start in a very tough rink against a very good team, he did very well. Very happy for him. Very proud of him.”

Markstrom made a toe save on Seguin’s backhand at 8:23 of the third period.

“They won 1-0 with the power play goal,” Raffl said. “That was the difference tonight. Five-on-5, I think it was pretty even. I had the feeling we were comfortable playing 5-on-5 against them.”

NOTES: Markstrom is the second goalie in Flames history to get a shutout in their first game of the playoffs. Mike Smith made 26 saves in a 4-0 win against the Colorado Avalanche in Game 1 of the West First Round on April 11, 2019. … Defensemen Rasmus Andersson (Calgary) and John Klingberg (Dallas) were each assessed a five-minute major penalty for fighting and a game misconduct at the end of the first period. … Stars defenseman Miro Heiskanen led all skaters with 29:57 of ice time.