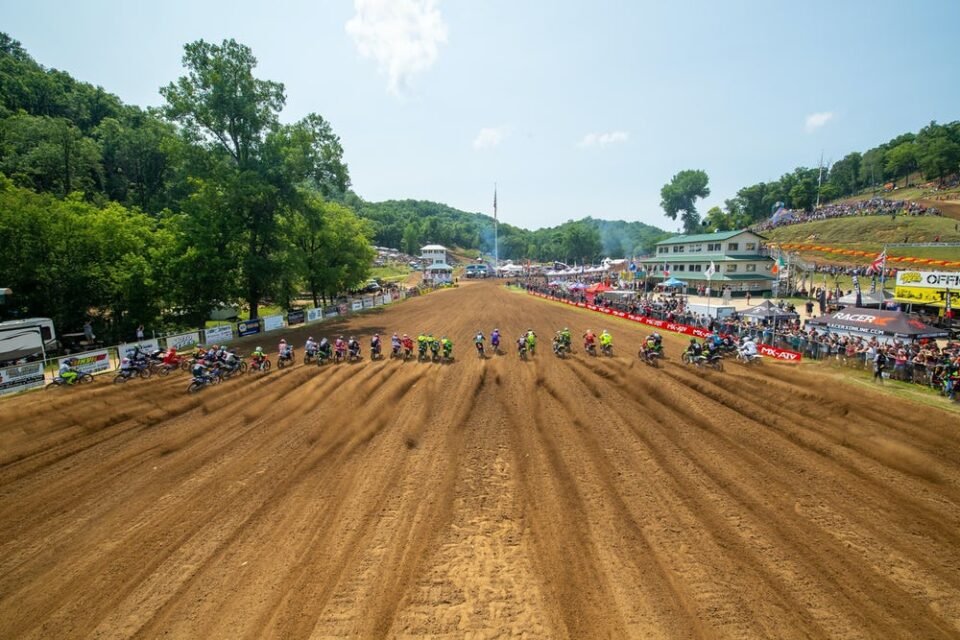 MORGANTOWN, West Virginia—With the landmark 50th anniversary season less than a month away, MX Sports Pro Racing has announced a new partnership with global beverage powerhouse Monster Energy, which will become the “Official Energy Drink” of the 2022 Lucas Oil Pro Motocross Championship, sanctioned by AMA Pro Racing. Through its support of the world’s most prestigious off-road motorcycle racing series, Monster Energy will enhance the Nationals experience for fans in attendance and at home, celebrating the storied legacy of the championship and further amplifying its star-studded roster of Pro Motocross racers.

“When you look at the decades of support of both the sport’s most prominent championships and world-class athletes, Monster Energy has become synonymous with motocross,” said Davey Coombs, President, MX Sports Pro Racing. “Through its understanding of the deep, rich history of the discipline, Monster has elevated all forms of two-wheeled off-road racing and is an ideal partner to help celebrate Pro Motocross’ incredible legacy throughout our 50th anniversary. We’re excited for what they have planned for our loyal fanbase this summer in what is quickly becoming one of the most anticipated seasons for professional motocross racing across the globe.”

Monster Energy Star Yamaha Racing’s Dylan Ferrandis, from France, headlines Monster Energy’s lineup of athletes and preseason storylines as defending 450 Class Champion. Align Media In preparation for the summer campaign, Monster Energy is developing a variety of support events that will serve to complement the high intensity of the four motos that serve as the cornerstone of each National, bringing even more excitement to one of motorsports’ most unique experiences. In addition to the brand’s renowned activation efforts, featuring sampling, live music, and the famed Monster Girls, video boards and special trackside viewing areas will help attendees stay even more connected to the action. Additionally, Monster Energy will provide fans with a look behind the scenes over the course of the 50th anniversary season through one-of-a-kind videos from its exceptional digital team.

“Whether it’s Monster Energy Supercross, MXGP and the FIM Motocross of Nations, the Monster Energy AMA Amateur National Motocross Championship, GNCC Racing, SCORE International, or now the Lucas Oil Pro Motocross Championship, no other company knows off-road motorcycle racing better nor has done more for this segment of motorsports than Monster Energy,” said Dave Gowland, Vice President, Motorsports Marketing, Monster Energy. “We are uniquely positioned to bring even more prominence to the already indelible legacy of American motocross, whether it’s a byproduct of our grassroots connections that span 20 years, our unparalleled roster of athletes, or massively loyal consumer base. Above all, we remain fans of the sport and share an unparalleled passion that has allowed us to dominate off-road for decades. The 2022 season is truly going to be one for the ages.”

Enhancing the fan experience at the Nationals is at the forefront of Monster Energy’s new partnership with the world’s most prestigious off-road motorcycle racing series. Align Media Monster Energy’s ties to Pro Motocross date back to 2002, when Ricky Carmichael’s reign of dominance that saw him capture a record 10 championships and 102 wins was still in its infancy. The GOAT himself remains one of Monster Energy’s most high-profile ambassadors to this day, spawning multiple generations of talent that have and continue to achieve tremendous success on the sport’s most hallowed grounds while adorned with the Monster Claw. With its highly anticipated support of the Lucas Oil Pro Motocross Championship for the landmark 50th anniversary season, Monster Energy now holds prominent partnerships with each of the world’s biggest and most influential championships.

On the starting gate, Monster Energy’s current lineup of riders reads as a who’s who of the sport’s most established and promising talents, headlined by reigning 450 Class Champion Dylan Ferrandis and three-time premier class titleholder Eli Tomac, teammates at Monster Energy Star Yamaha Racing. Additionally, a career rejuvenation for Jason Anderson at Monster Energy Kawasaki has him poised for a breakthrough season that could bring him an elusive Nationals victory, while Chase Sexton’s ascension to the upper echelon of the premier division brings title aspirations to Team Honda HRC. In the 250 Class, Monster Energy Star Yamaha Racing has been the division’s most dominant force in recent years and will once again be formidable with the likes former champion Jeremy Martin and perennial contender Justin Cooper, while Mitch Payton’s legendary Monster Energy/Pro Circuit/Kawasaki squad will be led by former winner Austin Forkner. The talent grows deeper with a mix of young and veteran talent that includes Monster Energy Star Yamaha Racing’s Christian Craig in the 450 Class as well as Levi Kitchen, Colt Nichols, and Nate Thrasher in the 250 Class, who will line up alongside Monster Energy/Pro Circuit/Kawasaki’s Seth Hammaker, Cameron McAdoo, Jett Reynolds, and Jo Shimoda.

Monster Energy athletes like Chase Sexton (23), Ferrandis (14), and Eli Tomac (3) will be amongst the title favorites this summer. Align Media The 50th Anniversary of the Lucas Oil Pro Motocross Championship will be bookended by the holiday weekends that serve as the proverbial starting point and finishing point of the summer, with the season-opening round over Memorial Day Weekend on May 28 and the season finale over Labor Day Weekend on September 3. The 12-round season will visit 10 different states, visiting iconic venues with decades of history like the Hangtown Classic (June 4), High Point Raceway (June 18), RedBud MX (July 2), The Wick 338 (July 9), Spring Creek MX Park (July 16), Washougal MX Park (July 23), Unadilla MX (August 13), and Budds Creek Motocross Park (August 20), as well as additional world-class venues in Fox Raceway (May 28 & September 3), Thunder Valley Motocross Park (June 11), and Ironman Raceway (August 27).

Tickets to each round of the 2022 season are now available and can be purchased by visiting the official website of the Lucas Oil Pro Motocross Championship, ProMotocross.com.

For information about the Lucas Oil Pro Motocross Championship, please visit ProMotocross.com and be sure to follow all of the Pro Motocross social media channels for exclusive content and additional information on the latest news:

Facebook: @americanmotocrossInstagram: @promotocrossTwitter: @ProMotocrossYouTube: AmericanMotocrossNow available for download for both Apple and Android devices is the official Pro Motocross App. Fans of American motocross can have access to the world’s most prestigious off-road motorcycle racing series right at their fingertips on their mobile devices. Developed by AMA Pro Racing, the Pro Motocross App provides users with the most important information surrounding the Lucas Oil Pro Motocross Championship, from series news to schedule and ticket information, as well as broadcast schedule details and live timing & scoring. Download it now via the App Store or Google Play.

Sign up for our newsletter to get headlines, info, and scoops as soon as they break.

3 Keys: Predators at Avalanche, Game 1 of Western First Round