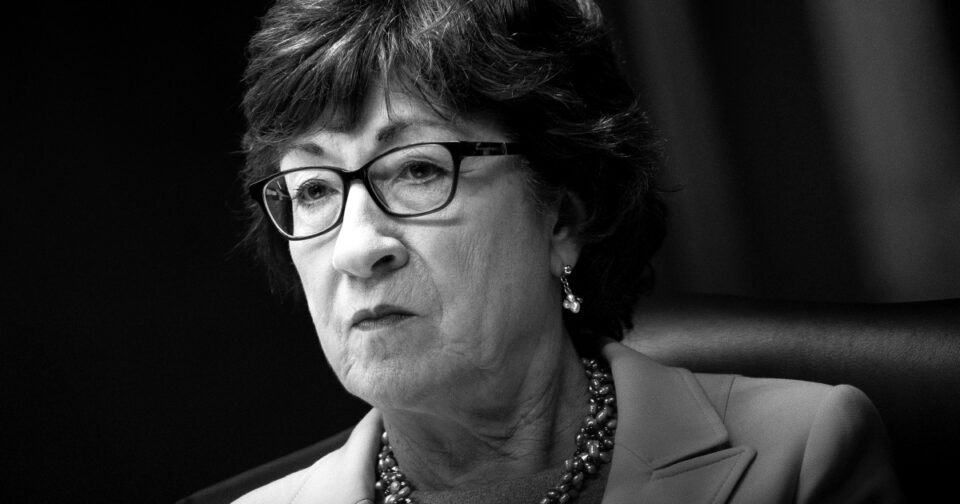 At this point, we have to assume that Sen. Susan Collins, R-Maine, is either a knowing, inveterate fabulist or a principled rube. Alas, in American politics, only one of those things is a disqualification for serving in office. (It’s the latter.) And anyone who’s spent any time in Washington knows that being accused of being a liar is an insult but that being naive is worse.

Of all the things the leaked opinion is, inconsistent ain’t one of them.

Collins’ statement Tuesday on Supreme Court Justice Samuel Alito’s leaked draft opinion that would overturn Roe v. Wade hangs a lot on its being somehow unrepresentative of the judges’ eventual ruling: “If this leaked draft opinion is the final decision and this reporting is accurate, it would be completely inconsistent with what Justice Gorsuch and Justice Kavanaugh said in their hearings and in our meetings in my office.” But of all the things the leaked opinion is, inconsistent ain’t one of them.

The two conservative Supreme Court nominees whom she supported over the past decade — Neil Gorsuch and Brett Kavanaugh — haven’t been exactly cagey about their opinions on reproductive rights. Gorsuch walked into his nomination hearing having sided with or written decisions limiting access to contraception and supporting the right of a Utah governor to single-handedly defund Planned Parenthood. Kavanaugh … well, was Kavanaugh, and he had given a speech lauding the late Justice William Rehnquist’s dissent in Roe, bemoaning that he was “not successful in convincing a majority of the justices in the context of abortion either in Roe itself or in the later cases, such as Casey.”

Both justices were screened by the very conservative Federalist Society. Then there’s the whole, you know, GOP project of the past 50 years that has worked toward this goal patiently, steadily — and without a lot of stealth.

At the very least, these men’s résumés should have raised some doubts about their commitment to Roe. But no. “I do not believe that Brett Kavanaugh will overturn Roe v. Wade,” Collins said in 2018. And of Gorsuch: “I had a very long discussion with Justice Gorsuch in my office, and he pointed out to me that he is a co-author of a whole book on precedent.”

That Collins was able to blithely announce her confidence in these Republican-appointed justices’ support of Roe is more than infuriating; it’s alarming.

If Collins is lying — and lying this consistently and repeatedly — reporters need to note it and press her about it every time she’s interviewed. Every time she’s quoted. Hey, remember how journalists had a collective fit of conscience when Trump was in office? Readers and viewers were reminded on a regular basis that Trump had lied about this or that. We kept track of the lies.

If Collins isn’t lying and instead is sailing forward in the murky waters of American politics without the ballast of cynicism, that’s so much worse. It’s worse because it’s not something journalists or constituents can correct for, like when you know hot and cold water are reversed on a faucet. When someone is a serial liar, we have guidance in deducing the truth. We can contextualize whatever they’re saying through a mirror lens.

When someone is just a persistently beguiled naif, decades into elected office, even … well, what can we do?

When someone is just a persistently beguiled naif — decades into elected office, even … well, what can we do?

A true believer can sometimes be swayed by radical experiences.

Justice Lewis Powell was the court’s most surprising signatory to the original Roe opinion. As a jurist, he had been a proponent of what conservatives still call “judicial restraint”; at least one legal scholar has called Powell’s vote in Roe “baffling” (and wrote a whole paper devoted to untangling it). But Powell’s support for choice was no mystery: While in private practice, he once got a late-night call from a firm employee. The young man’s girlfriend had just bled to death after trying to abort her pregnancy herself. The boyfriend had helped and thought he might face criminal charges. Powell interceded on his behalf.

According to his biographer, this experience is why Powell went against his previous judicial bent and voted with the majority in Roe.

But Collins has called herself pro-choice her whole career. We can’t show her the ugly evidence of the harm outlawing reproductive choice might cause; she knows how lack of access to abortion can force women to drastic measures. She called the Texas abortion ban “extreme” and “inhumane.”

Now, she will get a chance to see exactly how extreme and inhumane abortion bans can be. If this opinion is what the court ultimately decides, people are going to suffer — economically, mentally, physically. Unwanted babies will be born. People will risk their lives trying to preserve their personal choice — and not all of them will survive. And what about the women who otherwise wouldn’t carry their children to term, just to die bearing them?

Will Collins still believe every nice man who makes promises to her over tea?

I ask this with grim sincerity: How many would have to die for Susan Collins to lose her innocence?

It almost makes you wish she was just a liar.

Ana Marie Cox is a political journalist and author. Her work has appeared in Harper’s, Sports Illustrated, The Daily Beast and The Washington Post, among other places.

The biggest health risks women would face if Roe v. Wade is overturned