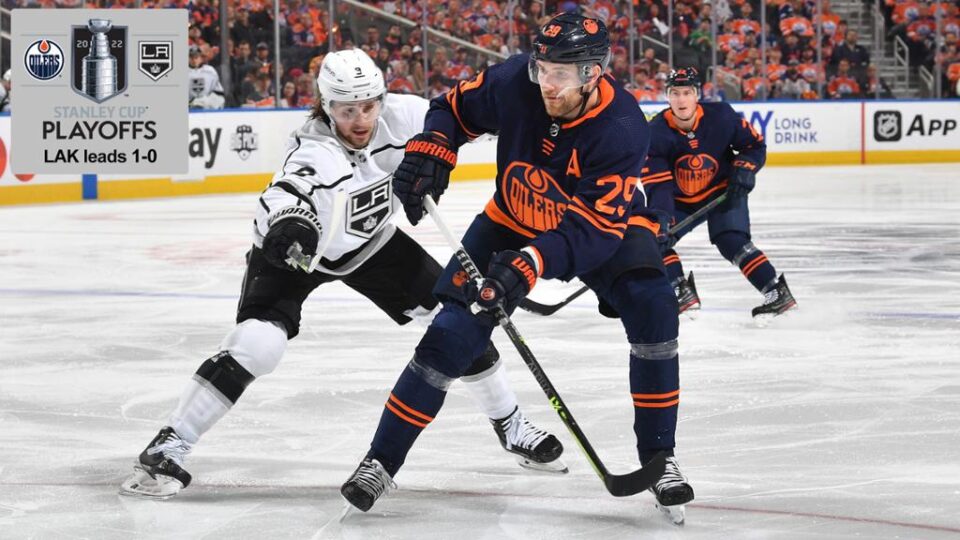 The Edmonton Oilers will try to avoid going down 2-0 to the Los Angeles Kings in Game 2 of the Western Conference First Round at Rogers Place on Wednesday.

The Kings never trailed and won 4-3 in Game 1 on Monday.

“I think there were good signs in the last game at times where we got our game going a little bit but it wasn’t long enough and it wasn’t consistent enough through the 60 minutes,” Oilers center Leon Draisaitl said. “We’re looking to do that.”

Edmonton has lost seven straight postseason games; it lost the final two games to the Chicago Blackhawks in a four-game defeat in the best-of-5 2020 Stanley Cup Qualifiers and was swept by the Winnipeg Jets in the best-of-7 Stanley Cup First Round last season.

Oilers coach Jay Woodcroft said none of that matters.

“After Game 1, we talked a lot about just getting better a little bit each day as we move through the series,” Woodcroft said. “We had a good day yesterday. I think the mindset is a good one for our team right now.

“I think we want to start the game better than we did in Game 1. It’s a focal point for us.”

Asked if the Kings are now playing with house money, coach Todd McLellan said their goal is now to sweep the first two games on the road.

“No one likes to lose their house money either,” McLellan said.

The Kings countered that pair with Anze Kopitar, who played 25:41, and Phillip Danault, who had two points (one goal, one assist) and played 22:45.

That matchup is expected to continue in Game 2.

2. Archibald in, Arvidsson outMcLellan said Wednesday that Viktor Arvidsson will not play in Game 2 after missing Game 1. The forward, who had 49 points (20 goals, 29 assists) in 66 games this season, did not skate Tuesday. No reason has been given for his absence.

The Oilers will put forward Josh Archibald in the lineup for Game 2. He had one assist in eight games this season.

“I see a feisty type of guy, someone who gets in on the forecheck and finishes his check,” Woodcroft said of Archibald. “I think he’ll come into the lineup and give us a burst of energy.”

Archibald will be available to travel to Los Angeles for Games 3 and 4, despite not being vaccinated for COVID-19 due to a medical exception after developing myocarditis at the beginning of the season, Woodcroft said.

3. Smith seeks to bounce backOilers goalie Mike Smith made an unwise turnover late in Game 1 and it led to Danault’s game-winning goal at 14:46 of the third period.

Smith, who made 31 saves in Game 1, said after the game he shouldn’t have made that attempted pass up the middle and that he’ll learn from the error. His teammates said they believe he’ll be able to rebound and stand tall in Game 2.

“I don’t think you need to worry about ‘Smitty,'” Draisaitl said. “He’s a battler. … He made a mistake but we all did. It’s not on Smitty. I thought he was really, really good and he’ll be good again tonight.”

Status reportEdmonton will dress a conventional lineup after playing with 11 forwards and seven defensemen in Game 1 on Monday.

Picasso portrait of lover as a sea creature sells for $67.5M in New York auction

U.S. lifts some Trump-era restrictions on Cuba, including limits on travel and remittances