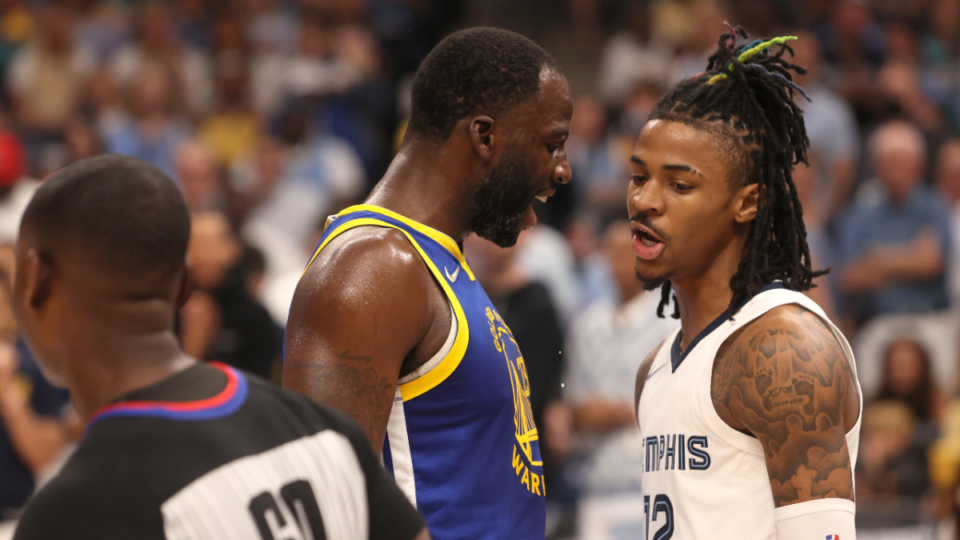 Mannix and Beck break down the playoff officiating after the questionable Flagrant 2 call on Draymond Green in Game 1 and how other players are adapting to a more physical style of basketball in the playoffs.

The following transcript is an excerpt from The Crossover NBA podcast. Listen to the full episode on podcast players everywhere or on SI.com.

Chris Mannix: Draymond Green, ejected early in Game 1 against Memphis. Do we think that ejection was warranted? Kane Fitzgerald, pretty quick on the trigger there for that ejection on Draymond. Draymond suggested on his podcast, and by the way did Draymond record that podcast, like in the locker room? Talk about modern media.

Howard Beck: That thing was out before the team bus left the arena.

CM: He might’ve gone back to the hotel by himself and just recorded his podcast.

HB: That was impressive work.

HB: I don’t agree with the ejection. And I do think that Draymond does suffer from reputation in these cases, but that’s kind of earned also, right? Like I don’t have a ton of sympathy for Draymond or anybody else who’s put themselves in this position over the course of history of the NBA. If you earn a reputation as being a guy who does a lot of extra stuff, you’re going to be judged that way. And was it fair in the context of just this one incident yesterday? No, I don’t think he should have been ejected. Did he maybe get less benefit of the doubt because he’s Draymond Green and has a history? Yeah, that happens. Like the NBA doesn’t even deny it, I’m not saying with Draymond specifically. The NBA will tell you, yes, of course, they take into account what a guy has done in the past.

But nothing that Draymond Green did on that play to me, warranted a Flagrant 2 and an ejection. I thought that was an overreaction, to say the least. I’m stunned as we record this on Monday afternoon, we’ve already heard reports that the NBA is not downgrading it to a Flagrant 1. I thought they should have. And it’s certainly putting Draymond Green and the Warriors in a tough spot, because there’s several rounds to go here if they’re going to make the Finals. And if he gets another Flagrant 2 it’s an automatic one-game suspension and we’re back to 2016.

CM: Yeah, I agree with you, that felt more like reputation. If Klay Thompson does that I don’t think he gets a Flagrant 2. And I don’t like it. I feel like if you’re in the playoffs … and look whether the NBA referees or the league wants to admit it or not, games are officiated differently in the playoffs. You allow a higher level of physicality in the postseason, it’s true. You know, you hear players talking about it, like what you can get away with. I was sitting, listening to Grant Williams the other day talk about how he can get away with more in the postseason. I’m not saying you let things get out of control, but on a play like that if you’re going to lean one way, lean towards letting the player play, you know? And let the NBA deal with it after the fact. Let them elevate it to a Flagrant 2 and hit him with a fine, and the possible suspension later in the playoffs; don’t do it in the middle of the game. The Warriors won, which kept the conversation down a little bit, but if they hadn’t and wound up losing the series, you don’t want that on the shoulders of the NBA.

HB: You know how you know this wasn’t an egregious Flagrant 2 type of foul? Because the Grizzlies didn’t react that way. The Grizzlies didn’t start pushing and shoving and screaming and saying, Look what you did to our guy. Like there was none of that usual in-the-moment reaction that indicates that something dirty had happened, or something egregious had happened, or something that we need to get payback for had happened; none of that was happening. And you saw Draymond try to catch him as he accidentally snagged his jersey. And I thought that looked accidental; it looked unintentional.

The whole thing about “follow-through” and “he hit him in the face,” yes, sometimes you’re going for the ball and you accidentally strike a guy in the head, it happens every single game. And normally on a review that becomes a Flagrant 1, because if it wasn’t egregious and it was seemingly incidental, you do the Flagrant 1 because the NBA does everything as a Flagrant 1 if there’s any contact to the head now; that’s fine. They basically called two Flagrant 1s and added it up to a Flagrant 2. One for the initial contact to the head, which most of us didn’t even notice in real time. And then two for the jersey/takedown. A takedown in which he was trying to soften the blow and trying not to have him fall hard. So just nothing about it made sense to me. The NBA is in a really weird place with regard to flagrants.

Joe Dumars just got named the new executive vice president and head of basketball operations today. That’s the role formerly filled by Kiki VanDeWeghe in past years, Stu Jackson, Rod Thorn, this is basically the dean of discipline and just also the overlord of all the rules, applications, flagrants, technicals and upgrades and downgrades and all that stuff. Maybe Joe Dumars who came from the Bad Boys Pistons will get to Olympic Tower and give some folks a talking to about where this has gone and that maybe, maybe they need to reassess and back off just a tad.

HB: And by the way, neither of us are suggesting we should go back to the Bad Boys days of the ’90s. Nobody wants to go back to all of that stuff and have the game slowed to a crawl and guys beating the crap out of each other and getting clocked in the lane and clotheslined. Nobody’s saying that. But they have overcorrected. We are too far in the other direction if that’s a Flagrant 2.

Listen to The Crossover podcast

Union blasts Musk after misconduct allegation: ‘Flight attendants are not just another accessory’