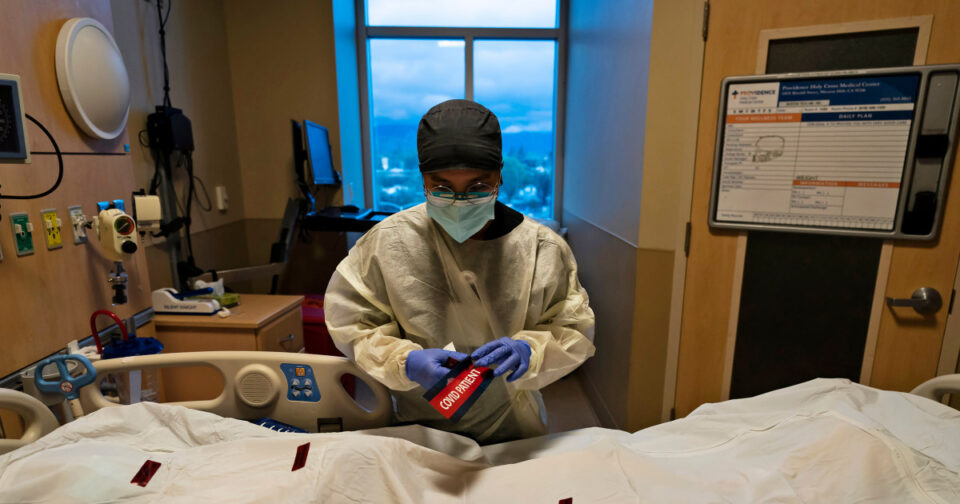 The U.S. on Wednesday surpassed 1 million Covid-19 deaths, according to data compiled by NBC News — a once unthinkable scale of loss even for the country with the world’s highest recorded toll from the virus.

The number — equivalent to the population of San Jose, California, the 10th largest city in the U.S. — was reached at stunning speed: 27 months after the country confirmed its first case of the virus.

“Each of those people touched hundreds of other people,” said Diana Ordonez, whose husband, Juan Ordonez, died in April 2020 at age 40, five days before their daughter Mia’s fifth birthday. “It’s an exponential number of other people that are walking around with a small hole in their heart.”

While deaths from Covid have slowed in recent weeks, about 360 people have still been dying every day. The casualty count is far higher than what most people could have imagined in the early days of the pandemic, particularly because then-President Donald Trump repeatedly downplayed the virus while in office.

“This is their new hoax,” Trump said of Democrats in front of a cheering crowd at a rally in North Charleston, South Carolina, on Feb. 28, 2020. “So far we have lost nobody to coronavirus.”

A day later, health officials in Washington made the inevitable announcement: a coronavirus patient in their state had died.

Now, more than two years and 999,999 fatalities later, the U.S. death toll is the world’s highest total by a significant margin, figures show. In a distant second is Brazil, which has recorded just over 660,000 confirmed Covid deaths.

Dr. Christopher Murray, who heads the Institute for Health Metrics and Evaluation at the University of Washington School of Medicine, said although this milestone has been looming, “the fact that so many have died is still appalling.”

And the toll continues to mount.

“This is far from over,” Murray said.

Each death causes a ripple of lasting pain. Diana Ordonez’s husband worked in information security management and had just gotten promoted before he died. When he wasn’t working, he loved to be with his family.

“I try to be understanding, but I definitely have felt so many times that I’m not equipped to parent this person,” she said.

She finds times of joy are tinged with sadness, too.

“It is shadowed by, ‘God, I wish he was here for this,'” Ordonez said. “It could be simple moments, like watching Mia at ballet, or going to a birthday party and watching her jump up and down, holding hands with her friend.”

‘We had the opportunity to be a shining example’

Per capita, the U.S. ranks 18th worldwide in Covid deaths, while Peru has the highest number. Still, many see the staggering death toll as evidence of America’s inadequate response to the crisis.

“We had the opportunity to be a shining example to the rest of the world about how to deal with the pandemic, and we didn’t do that,” said Nico Montero, a 17-year-old in Bucks County, Pennsylvania. Montero made headlines earlier this year when he traveled to Philadelphia, where children ages 11 or older can be vaccinated without parental consent, to receive his shot at age 16.

Dr. Robert Murphy, executive director of the Havey Institute for Global Health at Northwestern University’s Feinberg School of Medicine, said many expected the U.S. to better control the virus’s spread.

“We were very encouraged by the rapid development of the vaccines, and everybody really thought we were going to vaccinate our way out of this,” he said. “But then we had people that wouldn’t even take the damn vaccine.”

Steven Ho, 32, was an emergency room technician in Los Angeles when the pandemic began. He said he thinks changing guidelines from the Centers for Disease Control and Prevention confused the public, while disputes over vaccines and masks cost lives.

Ho quit his hospital job last year — one of many health care workers who have done so. A recent study calculated that about 3.2 percent of health care workers left the industry per month before the pandemic. That share jumped to 5.6 percent from April to December 2020. Relative to February 2020, the health care workforce has lost nearly 300,000 employees, the U.S. Department of Labor reported April 1.

Ho decided to become a comedian. Combining his experience treating Covid patients with comedy, he donned his hospital scrubs to create a popular series of TikTok videos called “Tips From the Emergency Room.”

It was Ho’s way of coping with what he had witnessed.

“It helped me release this pent-up energy, anger and sadness,” he said.

A pandemic that continued long after the advent of vaccines

More than half of U.S. Covid deaths have occurred since President Joe Biden was inaugurated in January 2021.

Most of those deaths — more than 80 percent from April to December 2021, for instance — were unvaccinated Americans, according to the CDC. As of February, the risk of death from Covid was 20 times higher for unvaccinated people than for those who were vaccinated and boosted, the CDC data showed.

“We know vaccines work. We know masks work. We know social distancing works, and we know crowd control, limiting crowded spaces, works. This is like a no-brainer, but we cannot seem to do it,” Murphy said.

Sherie Hellams Gamble — whose mother, Patricia Edwards, died of Covid in August 2020 — worries about the effects of the ongoing pandemic on health care workers. Edwards, 62, was an intensive care unit nurse for three decades who treated her patients as if they were family, her daughter said.

“I still talk to people that were working with her. I always find myself saying, ‘Please be careful. I’m thinking about you,'” Gamble, of Greenville, South Carolina, said. “Two years later and they’re still in the fight — I know that cannot be easy.”

Nine months after Edwards died, she was recognized with a lifetime achievement award in nursing. Gamble said it was bittersweet to accept the award on her mother’s behalf.

“It solidified her work that she’s done,” Gamble said.

The family created a scholarship in the hopes of bringing more nurses like Edwards into the field. Gamble said she imagines that if Edwards were still alive today, she would likely be telling everyone to take care of themselves.

“She would probably be saying, ‘Not only does your health affect you, but it affects other people, so do what you can do to keep yourself healthy,'” she said.

Gamble is certain her mom would have another reminder, too: “Don’t take for granted life and the days you are still here on Earth.”