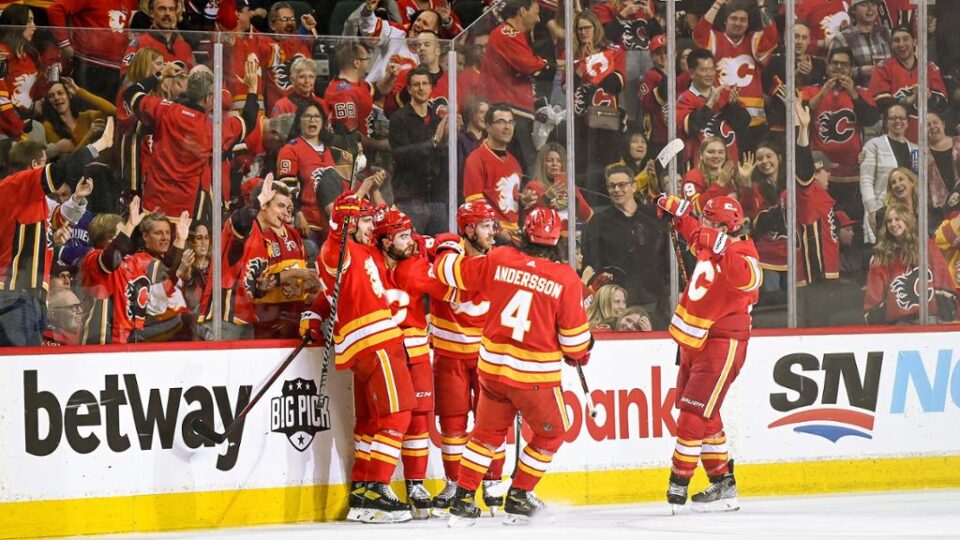 Who is the best Canadian team in the playoffs? — @PrairieAgMF

I picked the Calgary Flames to win the Stanley Cup and thus end Canada’s 29-year Stanley Cup drought. So quite clearly, I think the answer to your question is the Flames. They have all the ingredients necessary for a long playoff run, some of which were on display in their 1-0 win against the Dallas Stars in Game 1 of the Western Conference First Round on Tuesday.

It’s no surprise that Lindholm, Tkachuk and Gaudreau combined for Calgary’s only goal in Game 1.

Jacob Markstrom went 37-15-9 with a 2.22 goals-against average, .922 save percentage and nine shutouts. He finished tied for fourth in wins, third in GAA, tied for third in save percentage and first in shutouts. Markstrom is my pick for the Conn Smythe Trophy voted as MVP of the Stanley Cup Playoffs. He got off to a good start with a 16-save shutout in Game 1 against Dallas.

The Flames were 10th on the power play (22.9 percent) and sixth on the penalty kill (83.2 percent) in the regular season. They scored seven shorthanded goals and gave up three.

Not surprisingly, they scored on the power play and were 5-for-5 on the PK in Game 1.

Flames coach Darryl Sutter, a two-time Stanley Cup winner with the Los Angeles Kings (2012, 2014), has gotten buy-in across the board from his players. The Flames play similar to the way Sutter had the Kings playing with an emphasis on puck possession as their best way to defend and without stifling the top offensive players into a grinding game. They are free to play to their style with the puck for as long as they keep it. Outshooting Dallas 26-16 and owning a 53-38 advantage in total shot attempts in Game 1 speaks to that.

Why pick the Capitals? — @peterhassett

No, that’s not really why, although I was the only one of the 16 NHL.com staff writers and editors who picked the Washington Capitals to upset the Florida Panthers in the Eastern Conference First Round. Admittedly this is a long shot, though maybe not as long of a shot after the Capitals’ 4-2 win in Game 1 on Tuesday. It’s just one game, so you’re not going to see me gloating here..But I went with the Capitals because I like the advantage in experience they have on the ice and with coach Peter Laviolette. I like Alex Ovechkin’s ability to change a game with one shot. I like that Tom Wilson can impact a game with his physicality and offense. I don’t like that he left Game 1 with a lower-body injury. They have good center depth with Evgeny Kuznetsov, Nicklas Backstrom and Lars Eller. There’s a lot to like about the Capitals, their last week of the regular season notwithstanding. They were 16-5-3 and scoring 3.83 goals per game from March 3-April 24 before losing three in a row in regulation.

Picking the Capitals was also related to questions about the Panthers. I know the Panthers can score, but can they keep the puck out of the net enough to not need to score five goals to win playoff games? It’s rare that any team will be scoring four or five per game in the playoffs. They had a 2-1 lead going into the third period in Game 1 and couldn’t hold it. Meanwhile, they led the NHL with 11 third-period comeback wins and that’s not something they can rely on in the postseason. It’s harder to rally against the better teams when they start to lock down on a one- or two-goal lead. Can the Panthers get a lead early and keep it? They couldn’t in Game 1. Can they play a lockdown style? Suspect in Game 1. If they can figure it out, they might win the Stanley Cup. If not, the Capitals will advance.

If Mark Scheifele leaves the Winnipeg Jets, what teams make sense for him to go to? — @mikeglangford

What we know about Scheifele’s situation is the 29-year-old forward has two years left on an eight-year, $49 million contract and he said he wants an idea about the future direction of the Jets. Winnipeg general manager Kevin Cheveldayoff said Monday that Scheifele has not asked for a trade but needs to talk to him to get some clarity on the situation. The Jets will have to soon decide on Scheifele’s future with them. His $6.125 million NHL salary cap charge is a bargain for the production he has given the Jets in the first six seasons of his contract, scoring 432 points (172 goals, 260 assists) in 415 games. He is 16th in the NHL in scoring since the 2016-17 season, the first of his contract. Scheifele scored 70 points (29 goals, 41 assists) in 67 games this season but will be 31 when he’s due for his next contract and he could want a contract that carries a larger cap charge if he continues to produce at a point-per-game pace. If the Jets have reservations about giving a forward in his 30s his biggest AAV yet, they should be proactive and trade him while his value is at its highest, which is before he becomes a rental acquisition in the 2023-24 season, the last year of his contract.

The New York Rangers might be in the market for a center like Scheifele if they can’t re-sign Ryan Strome, who is a pending unrestricted free agent. The Pittsburgh Penguins could be looking for a center if Evgeni Malkin leaves in free agency. Malkin a pending UFA, though I think he will re-sign. Look out for the Boston Bruins. Patrice Bergeron’s future is in question with the 36-year-old center a pending UFA. But even if Bergeron returns, the Bruins never replaced David Krejci, their former No. 2 center who left after last season to play in his native Czech Republic, so Scheifele could fill a big need in Boston. The Philadelphia Flyers might see Scheifele as the replacement for Claude Giroux, who they traded to the Panthers before the 2022 NHL Trade Deadline. The Seattle Kraken are loaded with draft picks, including five in the first two rounds of the 2022 NHL Draft, and that might intrigue the Jets too. Scheifele would instantly become Seattle’s No. 1 center.

How different will the Vegas Golden Knights’ roster be next season given their cap constraints and their failure to meet expectations this season? — @tealforreal_96

Reilly Smith and Mattias Janmark are pending UFAs. Both could be gone. Smith is the favorite among the two to re-sign, but someone else would have to go to make it happen. Maybe that’s forward Evgeni Dadonov, who next season would be in the last year of his contract that carries a $5 million cap charge. Vegas tried to trade Dadonov to the Anaheim Ducks before the deadline but that was invalidated by the NHL, which stated the Golden Knights did not comply with the terms of the forward’s no-trade clause. They could circle back on a Dadonov trade during the offseason. Perhaps they look at trading goalie Robin Lehner, who has three seasons remaining on his five-year, $25 million contract and is coming off shoulder surgery. It seems like a long shot for Vegas to go without a veteran goalie, but Logan Thompson was solid this season, going 10-5-3 with a 2.68 GAA and .914 save percentage. Maybe the Golden Knights can trade Lehner, save $5 million on the cap, and go with Thompson and Laurent Broissoit with the hopes that one of them emerges as a No. 1.

Outlook for the Buffalo Sabres next season? — @kevin_malley

There is reason for optimism in Buffalo after the way the Sabres finished, going 16-9-3 in 28 games from March 2 to the end of the season. Their .625 points percentage in that time was tied for 12th. Prior to that, they were 16-30-8 with a .370 points percentage (29th). I’ll stop short at saying the Sabres should or could be a playoff team next season. As we look now, the odds are that their playoff drought extends to 12 years, but that is without any knowledge of what they’ll do in the offseason, potential upgrades to the roster that they could make. The Sabres need to find a No. 1 goalie and fill out their depth throughout the lineup. Adding a top center should be a priority.

The good news is the Sabres trended in the right direction after several years of starting strong and going the other way without the ability to redirect their course. They did it with what appears to be a burgeoning young core group of players they might finally be able to keep and build around.

Owen Power, 19, and Rasmus Dahlin, 22, will be a feared top two on defense for a long time. Tage Thompson scored 38 goals. The 24-year-old forward improved as the season went on, which is significant for his development. Victor Olofsson scored 20 goals and the 26-year-old forward should be expected to deliver at least that many, if not more next season. Dylan Cozens (38 points in 79 games) and Jack Quinn (two points in two games) will improve and become impact players. Cozens is 21. Quinn is 20. Alex Tuch scored 38 points (12 goals, 26 assists) in 50 games after the 25-year-old forward was acquired from the Golden Knights in the trade that sent Jack Eichel to Las Vegas. Peyton Krebs, 21, also arrived in that trade and the forward scored 22 points (seven goals, 15 assists) in 48 games.

3 Keys: Kings at Oilers, Game 2 of Western First Round