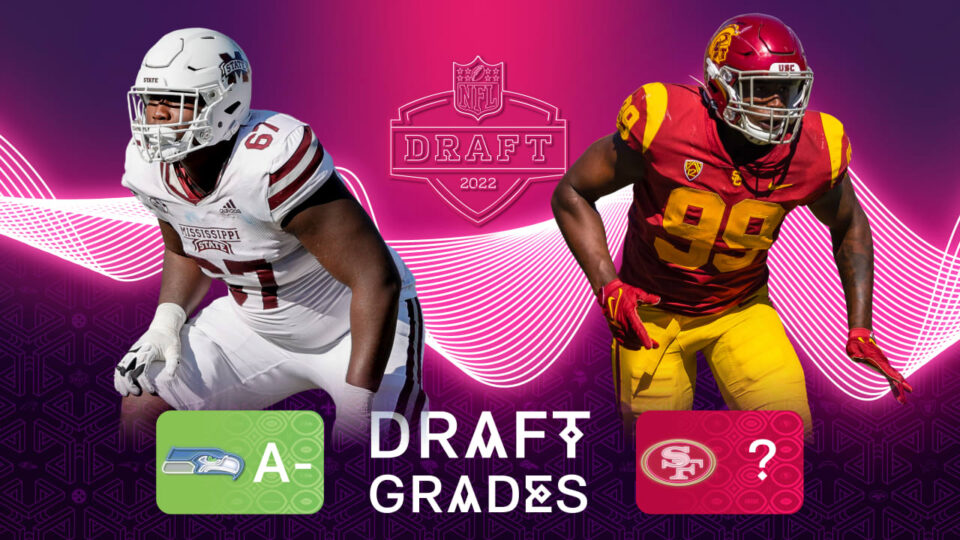 Why provide instant grades on the selections of prospects who have yet to take an NFL snap? Well, you’re reading this, aren’t you? Considering the makeup of every roster and the factors surrounding each pick, Gennaro Filice and Dan Parr attempt a division-by-division assessment of the 2022 NFL Draft. Keep in mind that these grades are based on draft hauls alone — picks traded for veteran players were not taken into account. Below is Gennaro’s NFC West report card.

NOTE: Draft classes are displayed from best to worst within the division.

(229) Bo Melton, WR, Rutgers(233) Dareke Young, WR, Lenoir RhyneNo, the Seahawks did not draft a quarterback. Yes, they still earned a lofty draft grade. How? Well, let’s take an honest look at where this franchise stands right now. While everyone in the building — from the general manager to the head coach to the players — continues to avoid the word “rebuild” like it’s the third rail of football, Seattle’s actions speak loud and clear. The Seahawks just traded their decade-long offensive quarterback and released their decade-long defensive quarterback. Two of their top three sack leaders from last season are gone, as is three-fifths of the starting offensive line. The ‘Hawks don’t want to call this rebuilding? OK, let’s be kind and say they’re retooling. And in this process, there’s no need to prematurely draft a quarterback just to draft a quarterback. Does anyone seriously believe Seattle’s poised to compete in 2022, playing in a division with the reigning Super Bowl champions and two other double-digit-win playoff teams? No. Just draft good players. And that’s exactly what the Seahawks did, filling numerous high-need areas along the way. Cross and Lucas — two athletic tackles with significant pass-blocking experience in Mike Leach’s Air Raid offense — could be the team’s bookend combo for years to come. Mafe’s an explosive edge bender with raw tools to develop into a prolific QB hunter. And at corner, the ‘Hawks added a battle-tested four-year starter in Bryant and a super-sized athletic freak in Woolen. I haven’t even mentioned Walker, a dynamic back who could quickly work his way to the top of a crowded backfield, with Pete Carroll and Co. looking to pound the rock even more than before. All in all, this feels like the most well-rounded Seahawks draft haul since the peak “Legion of Boom” years.

(235) Daniel Hardy, Edge, Montana State(253) Russ Yeast, S, Kansas State(261) A.J. Arcuri, OT, Michigan StateWith zero selections in the top 100, the Eff Them Picks Rams finally went on the clock late Friday night in the penultimate draft slot of Round 3. And no, much to Sean McVay’s chagrin, Cole Strange was not still available. The reigning Super Bowl champs did scoop up a guard, though. And in the wake of the team’s insanely produced, big-budget draft trailer, it was quite amusing to see Los Angeles use its first pick on the least sexy position in the sport. HOLLYWOOD!! Bruss actually spent significant time at right tackle during his Wisconsin career, but he projects as an interior blocker at this level. NFL.com draft profile maven Lance Zierlein comped him to Royce Newman, who started 16 games as a rookie for the Packers last season. That’d do. After the free agency departure of Austin Corbett, the Rams have an opening at right guard. Will Bruss join fellow Wisco O-linemen David Edwards and Rob Havenstein in the starting lineup? In Round 4, L.A. added Durant, a speedy, undersized slot corner who immediately became a depth piece when the Rams brought back Troy Hill via Saturday trade. One round later, Los Angeles boosted the backfield with Williams, who could develop into a premium third-down back with his well-rounded game and pass-pro polish. Then, late in Round 6, the Rams did what seemingly every NFL team felt the need to do this draft: take a bite out of the Georgia apple. Kendrick was a celebrated recruit who landed at UGA after being dismissed by Clemson, starting all 15 games for the national champion Bulldogs last season. Could this be Les Snead’s latest Day 3 find who makes instant draft graders look stupid? Man … Eff them picks.

(262) Brock Purdy, QB, Iowa StateIf there’s one thing I know about these 49ers, it’s that they can develop D-line talent. If there’s another thing I know about these 49ers, it’s that they can’t stop collecting running backs. With their two top-100 picks, San Francisco showcased two of the current regime’s defining traits. The D-line focus actually predates Kyle Shanahan and John Lynch, as the Niners have now spent their first pick on this position group in six of the past eight drafts. I’m cool with this. Give defensive line coach Kris Kocurek some pass-rushing traits, and he’ll maximize ROI. Jackson’s a twitchy edge rusher who flashed major talent as a true freshman at USC, but his development stalled as the Trojans deteriorated under Clay Helton. Tasked with alternating assignments, Jackson’s impact and playing weight ebbed and flowed. Still just 21 years old entering San Francisco’s pass-rush factory, Jackson seems like a promising prospect whose best football’s in front of him. Meanwhile, Davis-Price joins the crowded conveyor belt of Niners backs. I get that Shanahan sets up his entire offense with a multi-faceted running game, but the 49ers just saw sixth-round steal Elijah Mitchell nearly hit the 1,000-yard mark in just 11 games as a rookie. Given the roster’s more pronounced needs elsewhere (SEE: defensive backfield and offensive line), was this really the best use of the No. 93 overall pick? What does it mean for last year’s No. 88 overall pick, RB Trey Sermon? I don’t get it. The Niners’ second third-round pick made a lot more sense. Having blazed a 4.33-second 40-yard dash at the NFL Scouting Combine, Gray could provide the receiving corps with the electric-speed element San Francisco’s largely lacked since Marquise Goodwin’s 962-yard campaign in Shanahan’s first year on the job. One potential sleeper to watch: Castro-Fields, a traitsy size/speed cover man who came off the board with the last pick of Round 6 at No. 221. NFL Media draft guru Daniel Jeremiah saw much more value in the Penn State product, ranking him as the No. 118 overall player in the class.

(244) Christian Matthew, DB, Valdosta State(256) Jesse Luketa, LB, Penn State(257) Marquis Hayes, OG, OklahomaAs noted at the top of this file, these grades are based on draft hauls alone — picks traded for veteran players were not taken into account. So this isn’t the place to debate the Marquise Brown trade. But I do have a bone to pick with Steve Keim in regard to the team’s top selection … Whether you agree with the decision or not, the Cardinals re-signed tight end Zach Ertz on a three-year, $31.65 million deal back in March. A few days later, Arizona re-upped blocking TE Maxx Williams, spawning this headline on the team website: “Maxx Williams Returns To Cardinals To Complete Tight End Duo.” Complete? Not so fast! On Friday night, with their first pick of the draft, the Cards went right back to the TE well, becoming the first team to select a player from a position group widely viewed as one of this class’ least talented. Did I miss the memo on Kliff Kingsbury’s offense suddenly transforming into a tight end sanctum? Is Arizona planning to wear out 13 personnel during DeAndre Hopkins’ six-game suspension? I’m confused. After swinging superfluously in Round 2, Keim did double-dip on a big area of need in Round 3, grabbing a pair of edge rushers. Obviously, no one should expect Thomas and/or Sanders to fill the immense void left by Chandler Jones’ departure in free agency, but at least the Cardinals replenished the OLB coffer. Honestly, my two favorite picks in this haul might have come in Round 6. With Chase Edmonds now in Miami, Ingram could push for early playing time behind James Conner. Smith’s an athletic, experienced guard who adds depth to an Arizona offensive line that showed improvement last season but remains far from airtight.

3 Keys: Kings at Oilers, Game 2 of Western First Round