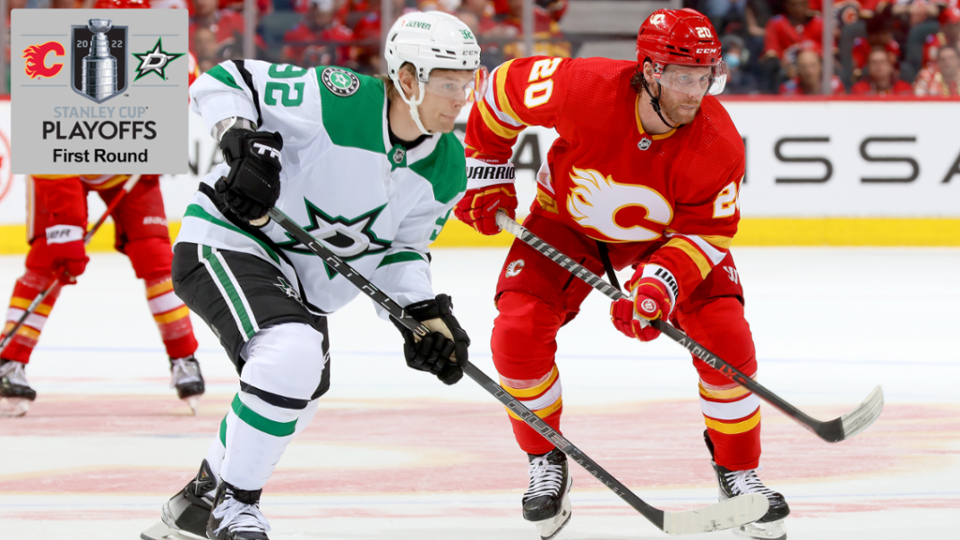 The Dallas Stars will stick with revamped bottom-three forward lines when they try to even the Western Conference First Round against the Calgary Flames at Scotiabank Saddledome on Thursday.

The Stars used these reconfigured lines in the second and third periods of their 1-0 loss to the Flames in Game 1.

“There’s balance there, there’s responsible players defensively on all three of those line and balances out a little bit,” Dallas coach Rick Bowness said. “Clearly, we need to generate some more offense from those guys as well, but we’ve got workers and checkers on every line for balance.”

Forward Elias Lindholm scored a power-play goal for the game’s only offense in Game 1. Goalie Jacob Markstrom made 16 saves for his second career NHL postseason shutout.

Calgary would be fine with this ending up a series of low-scoring games.

“That’s the good thing about our team. I feel like we can play any style, whether it’s big and physical, high scoring, low scoring,” Flames forward Matthew Tkachuk said. “We’ve had a few 1-0 games this year. We’ve had a few nine-goal games and everything in between. Anything comes, we’ll be ready for it.”

1. Tkachuk effectTkachuk had an eventful Game 1, with an assist on Lindholm’s goal, one shot on goal, three hits, a giveaway and takeaway. The right wing and his linemates, Lindholm and left wing Johnny Gaudreau, were also on the ice for the final 32 seconds to keep the Stars from scoring the tying goal.

The Flames appreciate the 24-year-old’s intensity.

“Matthew, he’s a leader on our team,” defenseman Noah Hanifin said. “That’s when he’s playing his best hockey is when he gets that emotion going. He’s a physical presence but he also has so much skill and can kind of play any type of game. I think he’s a player that is definitely built for playoffs.”

“He’s got poise,” Bowness said. “He’s a strong-character kid. He has a lot of confidence and I don’t think he likes the goal that went in but then he made up for it with some big saves. He did his job. He gave us a great chance to win that game. You only give up one goal against that team, you’re doing your job. The other guys have to put the puck in the net.”

3. Preparing for pushbackThe Flames are ready for the Stars to put forth a tough effort to try and even the series, and they’ll look to match it.

“Obviously whenever you lose a game in a series your main focus is to bounce back as an individual and as a team,” Calgary forward Milan Lucic said. “We know that they’re going to be better, so that means we need to be better.

“But what happened in Game 1 happened in Game 1. Game 2 is a new game, new storyline, new everything. Our preparation has to go up a level to make sure that we’re giving ourselves the best chance to have success.”

Status reportThe Flames will dress the same lineup they used in Game 1.

3 Keys: Predators at Avalanche, Game 2 of Western First Round

First Pitch: What’s wrong with the Red Sox? Everything and nothing