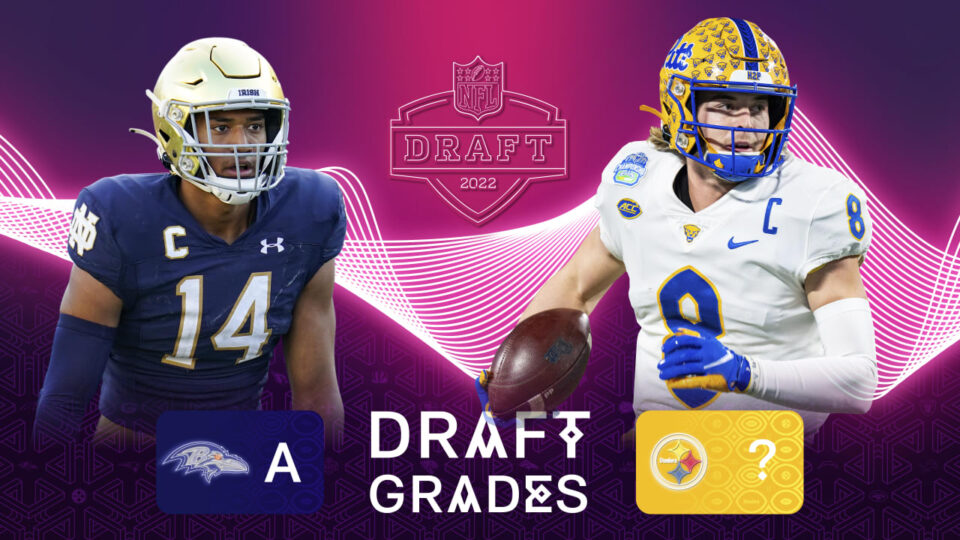 Why provide instant grades on the selections of prospects who have yet to take an NFL snap? Well, you’re reading this, aren’t you? Considering the makeup of every roster and the factors surrounding each pick, Gennaro Filice and Dan Parr attempt a division-by-division assessment of the 2022 NFL Draft. Keep in mind that these grades are based on draft hauls alone — picks traded for veteran players were not taken into account. Below is Dan’s AFC North report card.

NOTE: Draft classes are displayed from best to worst within the division.

(196) Tyler Badie, RB, MissouriOops, they did it again. In what is seemingly an annual tradition, the Ravens put on an exhibition when it comes to accumulating talent and finding value in the draft. Also, we should mention they were able to acquire a first-round pick for Marquise Brown (no Pro Bowl nods, average of 787 receiving yards per season), even though we’re not evaluating trades involving veteran players in these grades. There’s a case to be made that they should have drafted a receiver after parting with Brown, but aside from that, general manager Eric DeCosta filled the team’s biggest needs. Using NFL.com analyst Daniel Jeremiah’s prospect rankings as a guide, no team added more top-150 talent than Baltimore. The squad’s first pick of the draft set the tone for what was to come. Hamilton’s stock wasn’t helped by his timed speed at the NFL Scouting Combine and his pro day, but he was NFL.com analyst Lance Zierlein’s highest-graded prospect this year. Jeremiah ranked him fifth overall. Landing him at No. 14 could prove to be a steal. The Ravens then selected the top center in the draft (Linderbaum), a player who was considered a likely top-15 pick prior to tearing his Achilles during his pro day (Ojabo) and one of the most dominant performers from the Reese’s Senior Bowl (Jones). Their record six fourth-round picks yielded the massive Faalele, who could become a starting right tackle, and more good value in Armour-Davis, Kolar and Likely. Some people might not love going with a punter in Round 4, but I’m not going to argue about specialists with a team that has demonstrated it knows what it’s doing in that department. Baltimore might have just walked away with six or seven future starters. The Ravens let the board come to them and might just end up with an embarrassment of riches in a few years.

(225) Mark Robinson, LB, Mississippi(241) Chris Oladokun, QB, South Dakota StateThe Steelers selected a quarterback in Round 1, which means retiring general manager Kevin Colbert’s final draft with the organization will largely be judged based on how Pickett fares in the NFL. For now, the decision to use the 20th overall pick on a passer seems fine. No one from this year’s QB class made evaluators swoon. Pickett was the only one selected in the first two rounds. Perhaps Pittsburgh could have addressed a different need in the first round and taken Desmond Ridder or Malik Willis on Day 2. I would not have been against that idea, but the former Pitt star was considered the best of the bunch at the position and no team should have more intel on him than the Steelers, given that they share a facility with the team he’s played for over the past five seasons. NFL.com analyst Lance Zierlein’s comp for Pickett is prime Andy Dalton. That might not be elite, but it’s definitely not bad. Hopefully nothing occurs in the seasons to come that reignites the discussion of his hand size. Anyhow, the team did make other picks. There’s a lot to like about the receiver selections. Pickens was getting first-round buzz leading up to the draft but was still available late in Round 2, and the undersized Austin has the quickness to become a playmaker in the slot. The 84th overall pick was a good spot for Leal, who could end up outperforming his draft slot if Pittsburgh can help him develop into a more explosive player. I might have invested a pick at cornerback or the offensive line at some point, but this is a decent haul for Mike Tomlin and Co.

(252) Jeffrey Gunter, Edge, Coastal CarolinaFresh off an AFC title, Cincinnati’s most pressing needs heading into the draft were in the secondary, and the Bengals took two big swings at the defensive backfield with their first two selections. They even made a rare trade up the board to nab a cornerback late in Round 2. I can’t argue with the strategy. It’s going to take a stronger secondary than the team had last year to make a similarly deep postseason run in the loaded AFC. Hill should help in that effort as a hybrid safety/nickel back with a nose for the football. Taylor-Britt offers the speed and intangibles as a former team captain to compete for playing time right away. I can’t say I was blown away by the Bengals’ decisions in the middle rounds. It seemed like there was better value available in Rounds 3 and 4, including at the tight end position, which I identified as a top-three need for the squad. They could have gone with Ohio State’s Jeremy Ruckert in Round 3 or Coastal Carolina’s Isaiah Likely in Round 4, but instead Cincy chose Carter and Volson, who can, at least initially, provide quality depth in the trenches. The team’s last two picks, Anderson and Gunter, are scrappy defenders who will need to carve out roles on special teams to make the roster. The draft class is on the smaller side and won’t do much to help the offense but there’s no doubt the Bengals gave the defense a lift here, which was the main task on the to-do list.

(223) Isaiah Thomas, Edge, Oklahoma(246) Dawson Deaton, C, Texas TechCleveland did not have a first-round pick this year, and Browns fans should get used to the feeling of a late start in the draft. The team currently does not hold another Round 1 selection until 2025 after dealing away three first-rounders in the Deshaun Watson trade. Keep in mind that the swap is not accounted for in this grade, as we’re evaluating each team’s picks relative to their draft capital and needs. General manager Andrew Berry did an adequate job by those standards. He traded out of the second round in a deal with the Texans and ended up with three third-rounders. I didn’t love that the Browns took Emerson — NFL.com analyst Daniel Jeremiah’s 125th-ranked prospect — with the 68th overall pick, although I do subscribe to the theory that you can never have enough good corners. The price was just a bit rich for my taste. There was a quick recovery, though. Cleveland addressed its most pressing needs with the next three selections, beefing up the defensive line and adding depth at wide receiver. Wright will likely need some time to hone his skills, but he has an intriguing collection of tools that could make him a starter one day, and Bell has a chance to be the type of player who makes teams regret downgrading him for his athletic testing. Winfrey, the Reese’s Senior Bowl MVP, was an excellent value early in Round 4 and fills a void in the D-line rotation. Before Day 3 was over, the Browns added the best kicker in the draft, fortified a position of strength at running back and took a shot on a developmental edge rusher in Thomas. They ended up with a respectable draft class despite their limited capital.

Oilers’ special teams come up big in Game 2, help even series vs. Kings