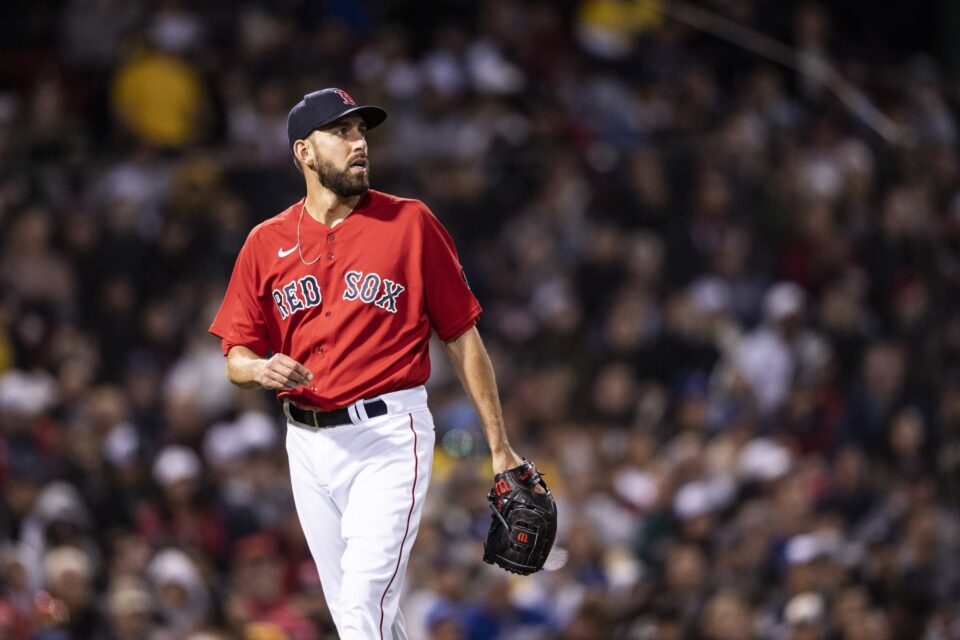 BOSTON, MA – APRIL 20: Matt Barnes #32 of the Boston Red Sox reacts during the seventh inning of a game against the Toronto Blue Jays on April 20, 2022 at Fenway Park in Boston, Massachusetts. (Photo by Billie Weiss/Boston Red Sox/Getty Images)

It’s the first week of May, and the Boston Red Sox are terrible.

They’re 10-16, failing at home and on the road, hovering dangerously close to the last-place Baltimore Orioles at the bottom of the American League East.

But it’s not just that the Sox are losing, it’s how they’re losing. There are losses fought valiantly, after which a team can still hold their heads high, knowing they did their best, and then there’s what the Sox are doing, which is laying down while the opposition beats them to a pulp with their bats.

Wednesday night was one of the worst games in recent memory. After taking the lead in the eighth on a Xander Bogaerts home run, their first all season in a late-and-close situation, the Red Sox blew two saves, gave up six runs in the top of the 10th, and lost 10-5. According to Alex Speier of the Boston Globe, of the 20 blown saves to occur in the ninth inning or later, the Sox own four, and no other team has more than two. He also noted that the Sox lead MLB in one-run losses and losses in extra-inning games.

Thursday wasn’t much better, as Shohei Ohtani and the Angels shut the Red Sox out and battered them once again, handing them an 8-0 loss to cap the series.

The Red Sox lead MLB in blown savesThe Red Sox now own eight blown saves while no other MLB team has more than five. Coming into Thursday, the pitching staff had given up 28 home runs, tied for fourth-most. Only two teams, the Pittsburgh Pirates and Cincinnati Reds, have fewer quality starts, and no respectable team wants to be mentioned in the same breath.

Entering Thursday, the Sox ranked 10th in MLB in hits but 16th in runs scored. More baffling is that they’re 14th in home runs but second in the league in doubles. At the beginning of May, their 3.5 runs per game ranked 24th in MLB.

So, how to make sense of these conflicting numbers?

Their struggles defy logic; the Sox can’t really blame injuries, which was the valid excuse for much of the 2019 season, nor total roster depletion and rebuild, the name of the game for them in 2020. The absence of Chris Sale is the norm now, rather than an unexpected blow. Unvaccinated players barred from entering Canada deserve some blame for leaving their team in the lurch, but that was just one series out of a month’s worth of play. On the whole, this team is healthy, which makes their abysmal start to the season all the more perplexing.

Also baffling is that virtually the same roster went all the way to Game 6 of the ALCS last season before making significant offseason upgrades by signing Trevor Story, Rich Hill, Michael Wacha, and Jake Diekman; Hill and Wacha, in particular, have been phenomenal. Several remnants of the franchise-record 108-win, 2018 World Series champion team also remain, including Xander Bogaerts, Rafael Devers, JD Martinez, and Nathan Eovaldi. In short, there are a lot of players on this team who know how to win.

With everything the Red Sox have going for them, it’s more than fair to ask what the heck is going on in Boston, because this should not be happening. So, I turned to FanSided’s MLB insider, Robert Murray, who previously picked the Sox as his sleeper team in the American League:

“The Red Sox were my sleeper pick to represent the American League in the World Series. So far, that looks like a mistake. Their offense has really struggled – from April 15 to May 2, they scored more than four runs in a game only four times – and while their starting rotation ranks seventh in baseball with a 3.21 ERA, their bullpen ranks 26th with a 4.50 ERA. I have confidence that chief baseball officer Chaim Bloom and manager Alex Cora can turn things around. But the losses of Kyle Schwarber and Hunter Renfroe, combined with an abysmal bullpen, will make that difficult. For now, it’s on Trevor Story, Alex Verdugo, Bobby Dalbec and Jackie Bradley Jr. to be better. A lot better. Otherwise their season could be over before it even starts.”

Is the new deadened baseball hurting the Red Sox?The Sox can place some blame on the new baseball, but in a way, it’s both a valid and invalid excuse, as it’s a league-wide issue, and doesn’t seem to be stopping their rival New York Yankees. ESPN‘s deep dive into the issue revealed some outrageous stats:

“MLB teams averaged 4.0 runs per game in April, which is the lowest average for a month since 1981, and 0.26 runs per team per game fewer than a season ago.

In fact, the leaguewide batting average of .231 was the lowest through April in MLB history, and the .675 OPS was the lowest since 1968 — aka The Year of the Pitcher.”

Murray also weighed in on the new baseball, to the same effect:

“It’s a real thing. A team like the Cardinals or Phillies (more so the Cardinals) struggling to hit the long ball with their lineups is a pretty good indicator that there’s something up with the ball. It’s had an impact on the Red Sox, too, since they had hit only two homers in their last 435 plate appearances entering April 28. But how much of that can you blame on the baseball or just an underperforming offense?”

So, the Red Sox are struggling, and there is a legitimate reason why. And yet, it’s not, because they’re playing with the same ball as everyone else. Other teams are making it work, and with the roster the Sox have, and the standards in Boston, there’s really no excuse.

3 Keys: Stars at Flames, Game 2 of Western First Round

How to Become a Self-made Billionaire, According to Mark Cuban