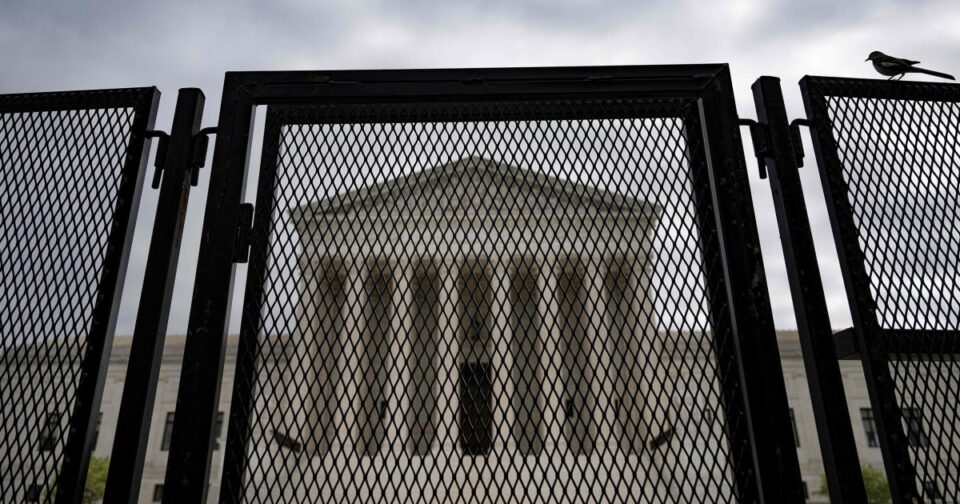 Federal law enforcement officials said Thursday that they are not involved in the Supreme Court’s investigation of who leaked an early draft of a Supreme Court opinion that would overturn Roe v. Wade.

The leak, published late Monday by Politico, ignited a firestorm of protest from supporters of abortion rights alarmed at the prospect that the court was preparing to wipe away 50 years of legal precedents guaranteeing access to the procedure. Democratic leaders in Congress vowed to push for a federal law that would bar states from making it illegal.

Chief Justice John Roberts ordered the court’s marshal, the chief security officer, “to launch an investigation into the course of the leak.” Since then, the court has declined to provide further information about how the investigation will be carried out.

Does the leak violate federal law?

Administration officials said the Justice Department’s view, at this early stage, is that the leak did not constitute a federal crime. Accordingly, neither the FBI nor other federal law enforcement organizations are involved in any investigation, the officials said.

Asked about the matter at a news conference Thursday, Attorney General Merrick Garland had nothing to add. “The chief justice has announced that the marshal of the court will be doing the investigation,” he said.

Some legal experts said the leak could be considered a technical violation of a federal law that prohibits giving a government document to someone not authorized to receive it. But under long-standing Justice Department practice, such actions are not prosecuted when the material is conveyed to a reporter for the purpose of making it public. The policy is intended in part to protect government whistleblowers.

The lack of involvement by the Justice Department could change if it turns out the document was obtained through some criminal action, such as trespassing or computer hacking.

What could the marshal of the court do?

Gail Curley has been the Supreme Court’s marshal for the past year, managing 260 employees, including members of the court’s police force. She went to the court from the Army, for which she was chief of the national security law division of the Judge Advocate General’s Office.

A former FBI official now working for a private security contractor, who spoke on the condition of anonymity, said the marshal and her police force can review the court’s email and phone records and examine logs from the court’s photocopies and printers.

Mark Rasch, a former Justice Department computer crimes prosecutor, said that in addition to those steps, the marshal can also seek to interview the roughly 70 people in the court who had access to the draft, written by Justice Samuel Alito. “That’s a lot to work with,” he said.

One sensitive issue, however, would be whether and how the marshal and her staff could or would seek to interview the justices themselves.

Since it issued the statement from the chief justice Tuesday, the court has declined to provide any further information about the nature or progress of the investigation, including whether any private security companies have been brought on board to assist.

The Supreme Court has dealt with leaks before. In 1973, Time magazine published a story describing the Roe v. Wade decision before the court announced it. Author James Robenalt said Warren Burger, who was then the chief justice, suggested he might require the court’s law clerks to take polygraph tests. But the clerk who leaked the story to Time came forward voluntarily.

Leak cases are notoriously difficult to investigate, even for law enforcement agencies that have the power to use search warrants and subpoenas.

In this case, Rasch said, Curley has two main tools: “cooperation and intimidation.”