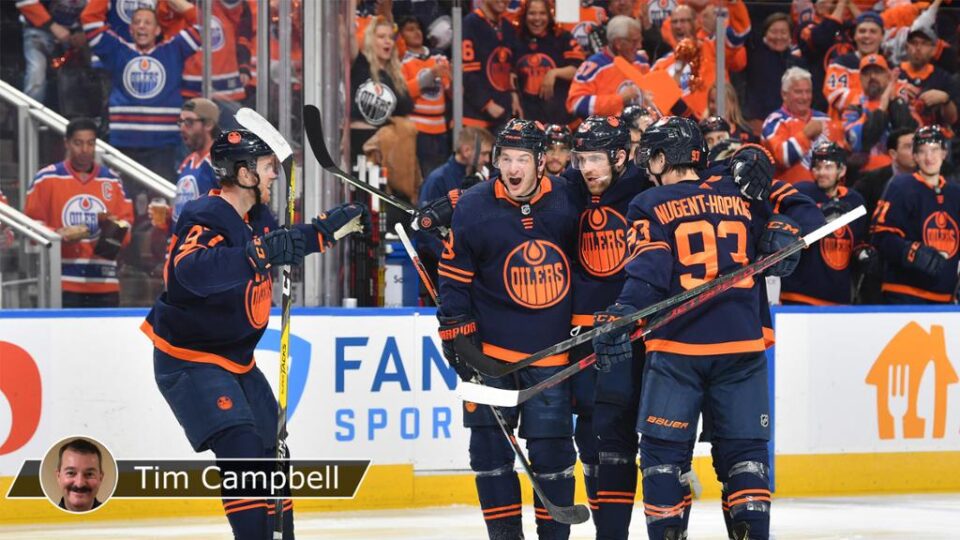 EDMONTON — The Edmonton Oilers really had no other option but to find a way to win Game 2 of the Western Conference First Round against the Los Angeles Kings on Wednesday.

They found that solution with superior special teams.

The Oilers had a power-play goal from center Leon Draisaitl and a shorthanded goal by defenseman Darnell Nurse 4:41 apart in the second period and rode that momentum to a 6-0 victory at Rogers Place to tie the best-of-7 series 1-1. Game 3 is at Crypto.com Arena on Friday (10 p.m. ET; TBS, CBC, SN, TVAS, BSSC).

Those were not odds the Oilers cared to face, not to mention taking the ice with a seven-game postseason losing streak going back to the best-of-5 2020 Stanley Cup Qualifiers.

So they did something about it.

“We stayed calm, believed in our structure, believed in the way we can play,” said Nurse, who buried center Connor McDavid’s pass on the shorthanded rush at 6:03 of the second period to give Edmonton a 2-0 lead after Draisaitl opened the scoring on the power play at 1:22. “With that said, it’s one game; there’s still a lot of hockey to be played in this series. But it’s a game we can build off of, a game that we can look back and see some of the positives in our structure, within the way we played. We get to L.A., we reset and get ready for the next one.”

Edmonton has dominated on special teams through Games 1 and 2; it has killed all eight Los Angeles power plays in the series (4-for-4 in each game) and scored a shorthanded goal. Edmonton went 2-for-4 on the power play in each of the first two games.

The Oilers’ special teams success in Game 2 began in the first period when they killed two over-aggressive penalties; a boarding call against McDavid at 6:44 and a cross-checking penalty to defenseman Duncan Keith at 11:32.

“The second period was a breakout period for us (with three goals),” Edmonton coach Jay Woodcroft said, “and it was led by our leaders who went out and scored a huge power-play goal and kind of broke the ice for us. It was a strong game, 20 players deep, in our lineup tonight.

“I thought those two penalty kills in the first period really set us up. We scored a shorthanded goal, which is a huge thing to create momentum. And the power play was a factor in our team winning the game tonight.”

The Oilers power play ranked third in the NHL during the regular season at 26 percent, behind only the Toronto Maple Leafs (27.3 percent) and St. Louis Blues (27 percent).

Video: 5 goal scorers for Oilers gets the Game 2 win

But their penalty killing, though it finished 17th at 79.4 percent over the entire season, was the NHL’s best from March 24 to the end of the regular season, 92.5 percent over their final 18 games.

That momentum has continued into the playoffs.

“In the last couple months, we’ve laid a good foundation in what we want our special teams looking like,” forward Derek Ryan said. “That rolled into playoffs.

“There’s been more penalties than I expected in the beginning of the playoffs, but we all know special teams are huge come playoff time. You only get so many power plays. We want our power play to be lethal. If they’re not scoring, they’re creating momentum for us right now, which is good. The penalty kill’s been doing the same. It’s creating momentum by killing it off.”

One of the keys to Edmonton’s penalty killing in Game 2 was the sharp play of goalie Mike Smith, who made 30 saves for his fifth NHL playoff shutout.

It was a critical rebound performance for Smith, whose late-game giveaway in Game 1 led to the Kings’ game-winning goal by center Phillip Danault with 5:14 remaining in the third period.

Los Angeles had eight power-play shots during their four opportunities on Wednesday, all denied by Smith.

“He was really sharp for us early on, especially on those penalty kills,” said forward Evander Kane, who scored two goals for Edmonton, including one on the power play at 11:55 of the third period that made it 6-0. “Personally, I really didn’t expect anything less from him. He’s so mentally tough. He played a great game the other night, a mistake was made, it happens all the time and he had a great performance tonight and we’ve got a lot of confidence in him as a group.”

Smith said he simply adopted the no-panic approach, opting for the calm demeanor and strong belief that Nurse spoke of when preparing for Game 2.

“To be honest, I really didn’t feel too bad in Game 1,” Smith said. “I made one bad play and it cost us the game. I think I just carried the same kind of mindset into tonight and obviously wanted to put in a good showing, especially after you feel like you’re maybe the cause of the loss. A bounce-back is obviously important and obviously tonight the team played more up to the capabilities of how we’re able to play, and we got rewarded because of it.”

3 Keys: Predators at Avalanche, Game 2 of Western First Round