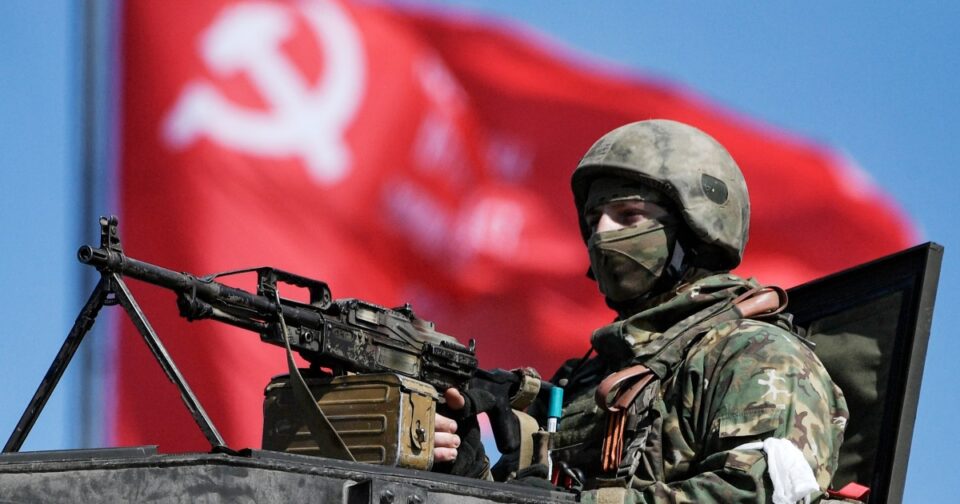 The port city of Kherson and its surroundings in southern Ukraine, one of the first regions to come under Russian occupation, is increasingly showing signs of what the Kremlin has in mind: long-term control.

Kherson’s elected mayor was deposed last week and replaced by a Moscow-approved appointee after he refused to collaborate with Russian forces. Shortly afterward, it was announced that the Ukrainian hryvnia would make way for the Russian ruble as the area’s dominant currency.

The region is gradually being cut off from information coming from the rest of Ukraine. Last weekend, as it was plagued by internet and cell service outages, major Russian state TV channels, one of the main media of Kremlin propaganda, started broadcasting there.

Meanwhile, Soviet flags and Lenin statues have popped up in central squares of several towns in the region after years of efforts by the Ukrainian government to rid the country of communist symbols — possibly part of Moscow’s effort to rouse nostalgia ahead of Victory Day on Monday, when former Soviet countries traditionally mark their joint struggle against Nazi Germany.

Moves like the introduction of the ruble and connection outages amount to “consolidation of the occupation” in the region, said Volodymyr Fesenko, a Ukrainian political analyst. “It’s another reminder that Russia is not going to give these territories back to Ukraine.”

It is all lent greater urgency by warnings from Ukraine and its allies that Russia plans to stage a sham referendum that could lay the groundwork for Moscow to formally enforce its rule, either by turning the region into a “people’s republic” akin to the eastern Ukrainian breakaway territories Russia already controls or even by annexing the area directly, as it did the nearby Crimean Peninsula in 2014.

With Russia increasingly seeking to distance the region from its Ukrainian past and present, the uncertain future is keeping residents on edge and driving some to flee.

Vanda Chernyshova escaped Kherson last month, leaving her mother and her sister behind.

Chernyshova, 28, first spoke with NBC News in early March, when she took to her city’s streets alongside hundreds of other people to protest the Russian occupation and declare that Kherson was part of Ukraine.

But with fears of a possible annexation growing, Chernyshova decided to leave for Odesa, another port city more than 120 miles to the west that is under Ukrainian control.

It’s relatively safe, although Chernyshova, who works stints as a receptionist on international cruise ships, said a residential building in her new neighborhood was recently hit by a missile strike.

“There is no safe place anywhere,” Chernyshova said. “But at least here in Odesa, you don’t have armored vehicles with letter Z driving under your windows.”

The Russians seized Kherson, 280 miles southeast of the Ukrainian capital, Kyiv, in early March. Residents said back then that they were afraid to leave their homes, instead hiding in their hallways with food and medicine dwindling as Russian troops patrolled the streets.

Chernyshova said most of her friends have left the city, fearing what awaits them under Russian occupation.

Kherson is a strategically important city of almost 300,000 people with a major ship-building industry that serves as a gateway to broader control of the south.

Located at the confluence of the Dnieper River and the Black Sea, just a two-hour drive from Russian-annexed Crimea, it is critical to establishing a land corridor from Russian-controlled areas in the east all the way to Odesa in Ukraine’s southwest and Moldova’s breakaway region of Transnistria — which analysts have said may be one of the goals of Russia’s invasion.

Analysts have argued that Russian President Vladimir Putin might seek some sort of victory in Ukraine in time for Victory Day next week. As his military is struggling to secure one on the battlefield, some movement on the status of territories in southern Ukraine could be presented as a win for Russia.

Indeed, the introduction of Russian currency in the region is just one sign of Russia’s intentions to establish long-term control, experts said.

“Using the Russian ruble is a way of emphasizing Russia’s dominance over everyday life and to get citizens used to the idea,” said Emily Ferris, a research fellow at the Royal United Services Institute, a defense and security think tank in London.

It’s also a matter of functional necessity, Fesenko said, to deal with processes like paying pensions and salaries to create a semblance of normal life under Russian control.

But the British Defense Ministry has warned that Russia’s recent moves signal its “intent to exert strong political and economic influence in Kherson over the long term.”

There has been rampant speculation that the Russians plan to formalize that influence by holding a referendum in the region to create a so-called People’s Republic of Kherson, after the model of the two pro-Russian breakaway territories in the Donetsk and Luhansk regions of eastern Ukraine.

Ukrainian President Volodymyr Zelenskyy threatened to exit any negotiations with Russia should a “pseudo-referendum” be announced.

The U.K. Defense Ministry said last week in an intelligence update that Russia was planning a “staged referendum” to justify its occupation, and Michael Carpenter, the U.S. ambassador to the Organization for Security and Co-operation in Europe, has also warned that Russia could be planning such a vote.

Moscow held a disputed referendum in Crimea before it annexed it eight years ago, in which nearly 97 percent of voters backed joining Russia. The results weren’t recognized internationally.

“Manipulated referendums, as in Crimea in 2014, are a slightly cynical way of rubber-stamping Russia’s control over a territory without many people seriously believing their legitimacy,” Ferris said.

Unlike in Crimea, the overwhelming majority of people in the Kherson region will oppose any such eventuality, experts said.

“There are very few people in the Kherson region who have pronounced pro-Russian views and are ready to collaborate with the Russians,” said Fesenko, the political analyst.

Zelenskyy vowed over the weekend that Kherson and all other occupied communities where the Russians “are now pretending to be masters” will be liberated.

Russia has been silent about any plans to hold a referendum in Kherson.

On Thursday, Kirill Stremousov, whom Moscow installed last week as deputy chairman of the region’s so-called military-civilian administration, said that there have been no talks about the referendum and that no such vote was on the cards. But, he said, the region is “distinctly moving toward becoming a subject of the Russian Federation without any referendums.”

Back in Odesa, Chernyshova is determined to maintain her Ukrainian identity no matter what the Russians have planned.

She is worried about what will happen to her home region and about the possibility of a sham vote that could alter its fate for years, if not decades.

How the Supreme Court could proceed with the Roe leak probe