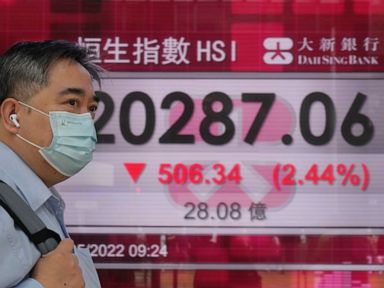 NEW YORK — Stocks are falling on Friday as Wall Street weighs how to interpret a strong U.S. jobs report amid worries the Federal Reserve may cause a recession in its drive to halt inflation.

The S&P 500 was 1% lower in afternoon trading after data showed U.S. employers continue to hire rapidly, and workers are getting relatively big raises, though short of inflation.

The market’s reaction reflects concerns among investors that the strong numbers would keep the Fed on track for sharp and steady increases in interest rates to corral inflation, analysts said. The selling gained momentum in afternoon trading. Earlier, the market briefly trimmed its losses and the S&P 500 flipped to a modest gain after an early burst for Treasury yields cooled and as economists pointed to some mixed signals on where inflation’s heading.

The swings were even wilder earlier this week, as all kinds of markets, from bonds to cryptocurrencies, grapple with a new market order where the Federal Reserve is aggressively moving to yank supports for the economy put in place through the pandemic.

The Fed is hoping to raise rates and slow the economy enough to snuff out the highest inflation in four decades, but it risks choking off growth if it goes too far or too quickly. The Fed raised its key short-term interest rate this week by a half a percentage point, the largest such increase since 2000. It also said more increases that size are likely on the way.

Not only do higher interest rates tap the brakes on the economy by making it more expensive to borrow, they also put downward pressure on prices of all kinds of investments. Beyond interest rates and inflation, the war in Ukraine and the continuing COVID-19 pandemic are also weighing on markets.

Stocks nevertheless zoomed higher Wednesday afternoon, after latching onto a sliver of hope from Federal Reserve Chair Jerome Powell’s comments following the latest rate increase. He said the Fed was not “actively considering” an even bigger jump of 0.75 percentage points at its next meeting, something markets had earlier seen as a near certainty.

Jubilance was the market’s instant reaction, with the S&P 500 soaring 3% for its best day in nearly two years. It sobered up the next day, though, amid recognition that the Fed is still set to raise rates aggressively in its battle against inflation. The S&P 500 on Thursday lost all its prior day’s gains, plus a bit more, in one of its worst days since the early 2020 crash caused by the coronavirus pandemic.

That may be why stocks faltered early Friday, after data showed hiring is still strong and pressure remains high on companies to raise pay for workers.

“These data do not change the outlook for Fed policy; the rates trajectory remains upward in the near term,” Rubeela Farooqi, chief U.S. economist at High Frequency Economics, wrote in a note.

Many of the factors driving inflation higher could linger well into 2022, said Sameer Samana, senior global market strategist at Wells Fargo Investment Institute. The latest swings in the markets could mean investors are getting closer to better adjusting for the Fed’s aggressive policy shift, Samana said.

“Powell’s conference didn’t change anything; there’s still plenty of inflation,” he said. “You’re probably getting to point where the Fed at least won’t be as much of a market driver.”

The yield on the two-year Treasury, which moves with expectations for Fed policy, initially shot as high as as 2.77% earlier in the morning. But it then slipped to 2.67%, down from 2.71% late Thursday.

The swings came as economists pointed to some possible signs of peaking within the jobs market, which may be an early signal inflation is set to moderate. That could ultimately mean less pressure on the Federal Reserve to raise rates so forcefully.

While workers’ wages were 5.5% higher in April than a year earlier, in line with economists’ expectations, the growth in average hourly pay from March levels was slightly below forecasts. Slower wage gains are discouraging for workers, but investors see them meaning less upward pressure on inflation.

BlackRock’s chief investment officer of global fixed income, Rick Rieder, pointed to surveys showing companies’ ability to hire becoming easier and other signs that some slack may be building in the red-hot job market.

“That raises the question of whether the Fed may slow its tightening process at some point over the coming months as a result of these expected trends, but while that’s possible recent data won’t provide markets much comfort of that happening anytime soon,” Rieder said in a report.

For now, expectations of rising interest rates have been hitting high-growth stocks in particular.

Much of that is because many of them are seen as the most expensive following years of leading the market. Many tech-oriented stocks have been among the market’s biggest losers this year, including Netflix, Nvidia and Facebook’s parent company Meta Platforms.

Nearly half the Nasdaq stocks were recently down by at least 50% from their 52-week highs, according to a BofA Global Research report from chief investment strategist Michael Hartnett.

US added 428,000 jobs in April despite surging inflation