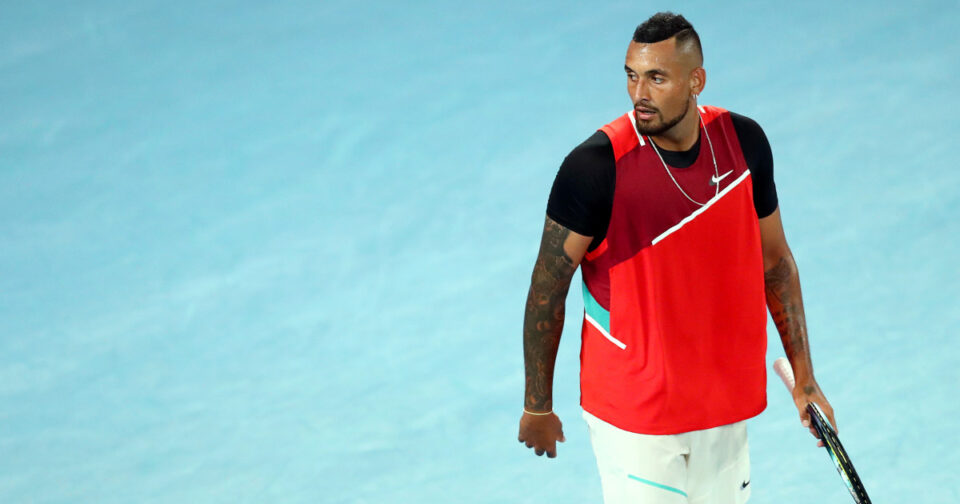 Kyrgios, a top 100 professional player in the world in men’s singles, was part of the championship duo that claimed the Australian Open men’s doubles championship earlier this year.

He said in a wide-ranging interview published this week by the Wide World of Sports that he has been through “dark” times.

“It was very serious, to the point of self-harm and it’s not okay,” Kyrgios said.

“I was abusing alcohol a lot, drugs and that spiraled out of control. … I guess I pushed everyone that cared about me away and I wasn’t communicating, and I just shut down real life and I was trying to handle and tackle my problems head-on.”

Kyrgios said he was trying to be what others wanted him to be, which led him to isolate himself.

“I felt I was letting people down all the time. I felt worthless to be honest, I didn’t feel comfortable, I hated my life at one stage,” he said in the interview. “I was cutting, burning. … It was so dark that I kind of liked it as well, like asking people to do it and stuff. What doesn’t kill you makes you stranger (and stronger). I’m still a bit cooked.”

A representative for Kyrgios was unable to be reached Friday by NBC News.

Kyrgios, who has had outbursts while on the tennis court, said hecklers and social media attacks also took a toll on him.

“I deal with it all the time. People just think raising the finger, abusing someone or making racist comments is acceptable in this day and age and I just don’t think that’s acceptable at all.”

Kyrgios’ father has roots in Greece while his mother’s heritage is traced to Malaysia.

Kyrgios also told the Wide World of Sports he is in a better place now because he improved his lifestyle, including watching his diet and getting sound sleep. He said the pandemic helped him form better habits.

Tennis sensation Naomi Osaka has been open about her own struggles with mental health. In 2021, she withdrew from the French Open after clashing with officials over her desire to skip media interviews to prioritize her mental health. Osaka was ranked no. 2 in the world at the time.

In July 2021, Simone Biles, the most decorated gymnast of all time, also brought athletes’ mental health into the spotlight when she withdrew from the Olympics in Tokyo because she felt like she was carrying “the weight of the world” on her shoulders.

In states where Covid cases are again on the rise, schools weigh safety measures, closures

Asians feel least included in the workplace out of all racial groups, new report says