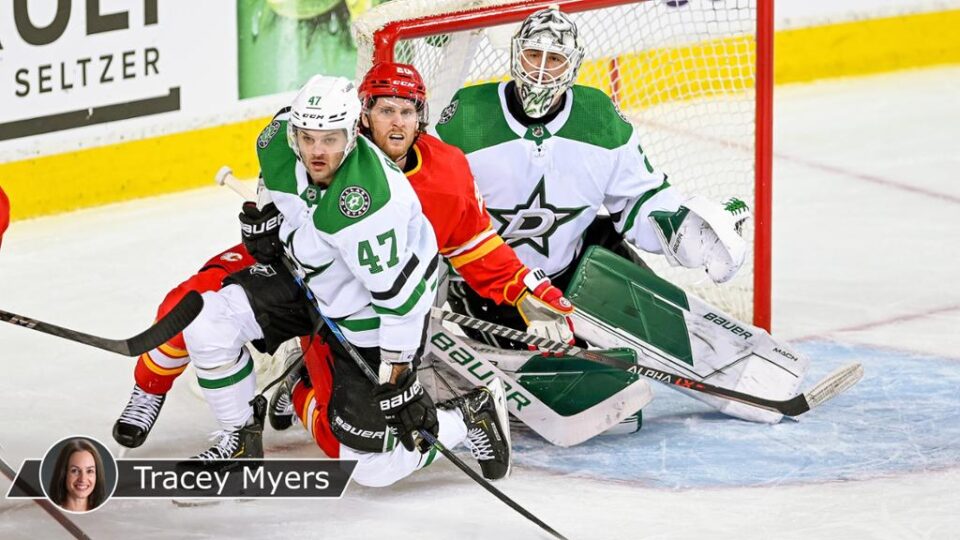 CALGARY — The Dallas Stars knew they needed everyone in the lineup to contribute if they were going to defeat the Calgary Flames in Game 2 of the Western Conference First Round on Thursday.

That is exactly what happened.

“You’re not going to beat that team with 10 guys going and 10 guys not going,” coach Rick Bowness said. “We weren’t happy with our game in Game 1, but we had no passengers tonight. We had everyone buying in and that’s the only way you’re going to beat this team.”

Through two games, the Stars have allowed one goal, coming in a 1-0 loss in Game 1. This against a team that averaged 3.55 goals per game in the regular season, which was sixth best in the NHL.

“I think we talked about the buy-in level, elevating that tonight and obviously with the physicality and the blocked shots,” Stars goalie Jake Oettinger said. “We’re not going to stand down to any of those guys. I think we showed tonight everyone’s bought in, everyone’s all in for this team and this playoff run. It feels great to get a win here.”

They have held Calgary’s top line of Johnny Gaudreau, Elias Lindholm and Matthew Tkachuk in check. A trio that combined for 301 points in the regular season has been held to three, all coming on Lindholm’s goal in Game 1. They were held to six shots on goal in Game 2, but none was too high danger or anything goaltender Oettinger couldn’t handle.

“I thought we made it too easy on them in the first game, we were better tonight,” Stars forward Jamie Benn said. “They’re going to have their pushes and their good shifts, and we handled them well and found a way to just dig in and get it done.”

Oettinger made 29 saves for his first career Stanley Cup Playoffs shutout and Joe Pavelski scored his first goal of the playoffs for the Stars 7:47 into the first period. Michael Raffl added an empty-net goal with 1:09 remaining in regulation.

Oettinger, who made 25 saves in Game 1, has looked calm and collected despite having less than 40 minutes of playoff experience prior to this series.

“I mean, when you’re a young player, you need to get experience somehow, you’ve got to get a start, you’ve got to take it and do what you can with it,” Pavelski said. “You want to be playing, you know? His game’s only gotten better throughout the season, so good for him. That’s what we expect. He’s been solid for us and nothing’s changed.”

The Stars allowed Oettinger to see what he needed to see and got in his way when necessary, blocking 20 shots. They were also more physical with a 36-35 edge over the Flames on hits. In Game 1, the Flames had the advantage 34-20.

“I mean, they can keep those guys on the outside and they give me a chance to make saves,” Oettinger said. “They have some great shooters over there and guys obviously who can score. If they keep them to the outside, then it’s my job to come up with those saves. Thankfully I did that tonight.”

The Stars aren’t ones to play the prettiest hockey. They expected this series to be a tough, grind-it-out type and it’s shaping up to be that way. Fortunately for them, this is a style that works for them.

“It’s a style you have to play, it’s playoff hockey,” Bowness said. “Not a lot of room out there to make a lot of plays. They’re good, they’re playing hard, we’re playing hard, it’s playoff hockey and both goaltenders obviously were great tonight, making the big saves. But when there’s not much room out there, man, you’ve got to work for everything you’re going to get.”

What time is the Kentucky Derby 2022?