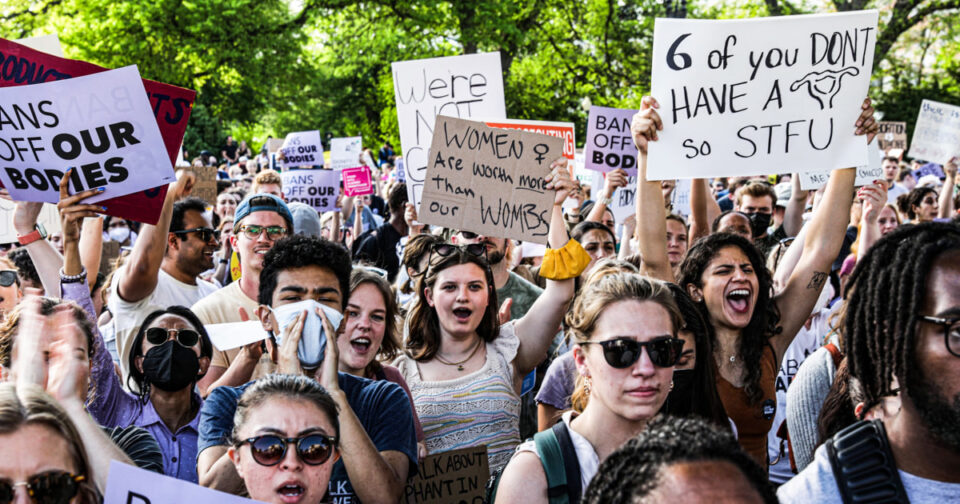 A week-long women’s labor strike set to begin Sunday, on Mother’s Day, in support of a proposed federal abortion rights bill is gaining traction online but also criticism from people who say the strike is poorly planned and not inclusive enough.

The idea for the strike, meant to pressure the government to enact the Women’s Health Protection Act, came to Allison Kolarik, of Asbury Park, New Jersey, after learning the Supreme Court planned to strike down Roe v. Wade, the landmark 1973 decision that established a constitutional right to abortion nationwide.

“My gut reaction was one of, ‘Of course they did’ … and then rage,” said Kolarik, 38, an apparel company owner who uses gender-neutral pronouns.

Kolarik took to TikTok, where they have more than 62,000 followers, and made a video reacting to the news.

“It’s May 2nd, and it’s a dark day,” Kolarik said in the video, “and there are going to be darker days ahead.”

When a commenter suggested that people who would be affected by the possible decision strike in response, Kolarik ran with the idea. They posted another video, calling for a “national women’s strike.” The proposed bill the strike aims to promote would codify abortion rights protections into federal law. Democrats have pushed for a vote but do not have the support to pass it in Congress.

Kolarik also set up an official website, and the idea has gone viral among supporters and critics. Hundreds of users have posted TikTok videos about the strike, and the #MothersDayStrike2022 hashtag has been viewed more than 554,000 times on the platform. At least 600,000 people have reached out through the website to express support and say they want to get involved, Kolarik said.

Kolarik said inspiration came from the 1975 Women’s Day Off in Iceland, where 90 percent of women went on strike to push for women’s rights, according to the Global Nonviolent Action Database. Banks, factories and schools were forced to close, and the strike sparked a movement that led to the first woman being democratically elected president in the world. Vigdis Finnbogadottir, a divorced, single mother, broke that glass ceiling five years after the strike, according to the BBC.

“By all accounts, it made a gigantic difference in Icelandic history,” said Erik Loomis, associate professor of history at the University of Rhode Island and author of “A History of America in Ten Strikes.”

Other protests are planned across the U.S. on Mother’s Day. The abortion rights group Ruth Sent Us has called for people to protest at Catholic churches because of the faith’s anti-abortion doctrine, even though more than half of U.S. Catholics say abortion should be legal in all or most cases, according to Pew Research.

But Kolarik and supporters say a large-scale economic action could be particularly effective.

“We’re a capitalistic nation — hit ‘em where it hurts, in their coin purses,” said Tamara Strzelecki, 37, a mother of two and small-business owner in Fenton, Michigan, who plans to strike. “I’m hoping that makes a big enough impact that they’re like, ‘We screwed with the wrong people.’”

Women’s paid labor contributes $7.6 trillion to the nation’s gross domestic product each year, according to a 2017 Center for American Progress report. If all women in the U.S. who had paid jobs took a day off, it would cost the country’s GDP almost $21 billion, it said.

Those figures do not include the value of women’s unpaid domestic labor, feminist economist Nancy Folbre has noted. A 2015 report by the McKinsey Institute found that women’s unpaid work is valued at about $10 trillion a year, or 13 percent of global GDP.

Kolarik said this context is part of what could make the strike impactful: “This actually hurts the power structure — to stop the [circulation of] money.”

But critics on TikTok argue the strike was too hastily organized and excludes the perspectives and leadership of working-class people and people of color.

“I don’t hate the strike all together, I just wish there [was] more planning,” said Leila Bryant, 21, a barista in Virginia. “I understand the urgency, [but] at the same time, we really need to take care in making sure if we’re going to do something extremely drastic and sacrificial, we have to make sure that everybody is taken care of and that our goals are solidified.”

Kat Holitik, 21, a server in Arkansas, said she supports the strike’s mission but fears tipped workers and small-business owners could lose income, and that it ignores the work of community-based organizations led by Black women and Latinas that have long been fighting for abortion rights.

“If you look at change over time, it takes planning, it takes organization and it takes people working together, and right now there’s not a lot of unity from different groups of people in this, and to have that you have to work at a local level to build support systems,” she said.

After seeing similar critiques on TikTok, Kolarik added links on the website to mutual aid resources and more ways to participate for people who cannot afford to take time off work. The alternatives include spreading the word about the strike and not spending money. They also set up a page on the nonprofit site Open Collective, where they hope to distribute funds to people who have lost income from striking.

“So many people live hand-to-mouth, paycheck to paycheck, and cannot afford to miss a day of work, let alone a week of work,” Kolarik said.

Chelsea Merritt, 35, a warehouse worker in Indianapolis, said she is one of those people, but she plans to participate in the way that she can.

“I’m a single mom, so I have to work, but I don’t have to purchase nothing,” she said. “My money is the thing I can take from the government, the country right now. You want to control my uterus? Well then, guess what? I control my money.”

Todd Boehly-Led Group Has Signed Contract to Buy Chelsea From Abramovich, per Report