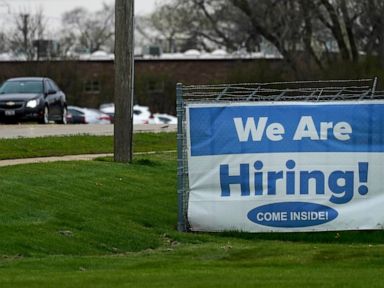 WASHINGTON — Friday’s jobs report for April provided mixed signals on the economic issue most on the minds of Americans: Chronically high inflation.

On the one hand, the proportion of people either working or looking for work slipped in April after a string of increases. Having fewer people in the workforce means employers need to raise pay to try to fill a record-high number of open jobs. Companies typically then pass on those higher labor costs to consumers in the form of higher prices.

On the other hand, average hourly pay increases slowed last month and have weakened over the past three months, a trend that could ease inflationary pressures.

The offsetting trends come as the Federal Reserve has accelerated its fight against inflation, which has surged to a four-decade high. This week, the Fed raised its key interest rate by a half-percentage point — its most aggressive move since 2000 — and signaled further large rate hikes to come. Higher rates can slow borrowing and spending but also risk causing a recession.

How inflation and the economy evolve in the coming months will be key to whether the Fed can succeed in slowing price increases without torpedoing growth.

Friday’s report from the Labor Department showed that employers added 428,000 jobs in April, the 12th straight month of 400,000 or more gains. The unemployment rate was unchanged at 3.6%, just a tenth above its pre-pandemic level, the lowest rate in 50 years.

Here are five takeaways from the jobs report:

The proportion of Americans who are either working or hunting for a job fell in April to 62.2% from 62.4% after three months of increases. April’s decline, though just one month, ended a trend toward rising numbers of job seekers. Fewer workers and higher pay could make inflation harder to restrain.

“If the supply (of workers) is not picking up, then those wage pressures are not going to be easing,” said Peter Hooper, Deutsche Bank’s global head of economic research. “And that means the Fed is going to have to do more” — that is, keep raising its key short-term rate, which would mean more expensive borrowing across the economy.

Average hourly pay rose 10 cents to $31.85 in April, a decent gain and a solid 5.5% higher than a year ago. Still, that pace is well below the latest year-over-year inflation rate of 8.5%. As a result, most Americans are losing purchasing power even as their pay rises.

That said, wage gains appear to be cooling, which could help reduce inflation. April’s average wage increase of 0.3% was below the March rise of 0.5%. And over the past three months, hourly pay has grown 0.9%, the slowest three-month pace in a year.

Higher wages are of course good for workers. But if they rise too fast, without an increase in worker productivity, it tends to accelerate inflation. Slower wage growth, on the other hand, can be more sustainable because it helps hold down inflation and allows the Fed to implement fewer rate hikes.

STRONG HIRING MAY BE COOLING

In Friday’s jobs report were other signs, aside from wages, that job growth might be slowing a bit after a year of robust gains. One indicator of where the labor market may be headed is the number of temporary workers being hired. Typically, employers use temporary employees to handle rising demand until they can find the permanent workers they need.

In both March and April, the number of temporary jobs was unchanged, after increases in January and February. Such a pullback may suggest that employers are seeing somewhat less need for workers.

And overall hiring, while strong, has been easing slightly. Employers have added an average of 523,000 jobs over the past three months, down from a three-month average of 549,000 in March and 602,000 in February.

Finally, the government revised down its estimate of job gains for February and March by a combined 39,000. That’s a relatively small number that doesn’t really change the overall picture. But revisions can signal which direction the economy is headed, and nearly all the revisions in previous months had been positive.

A slowdown is somewhat inevitable given the pace of rapid hiring and the limited supply of workers and may simply signal a shift to smaller, but more sustainable, gains.

“We couldn’t maintain the same pace as the past year,” said Aaron Sojourner, a labor economist at the University of Minnesota. “We do have to slow down.”

In April, the gap between Black and white workers narrowed, with more Black Americans looking for and finding work, while the number of white people in the workforce declined. Racial employment gaps have been steadily narrowing since the pandemic recession struck.

Unemployment for African Americans dropped to 5.9%, down from 6.2% in March. For white workers, it was unchanged at 3.2%. And the proportion of Black Americans who either have a job or are seeking one rose to 62.3%, above the rate for white Americans at 61.9%. The white rate has declined in recent years in part because of retirements.

Though the figures are volatile from month to month, this is only the second time that Black workers have topped white ones in labor force participation since 1972, after having first done so in June.

Women initially took bigger hits in the workforce than men after the pandemic slammed the economy, in part because industries with many female workers — retail, health care, restaurants — shed many millions of jobs. Some women also quit or stopped looking for work as schools closed and implemented online learning.

The Back Booth: ‘Republicans Can Take a Homeless Guy Off the Street and He Will Easily Win the Race’

Infinitely Growing Your Business With Gratitude