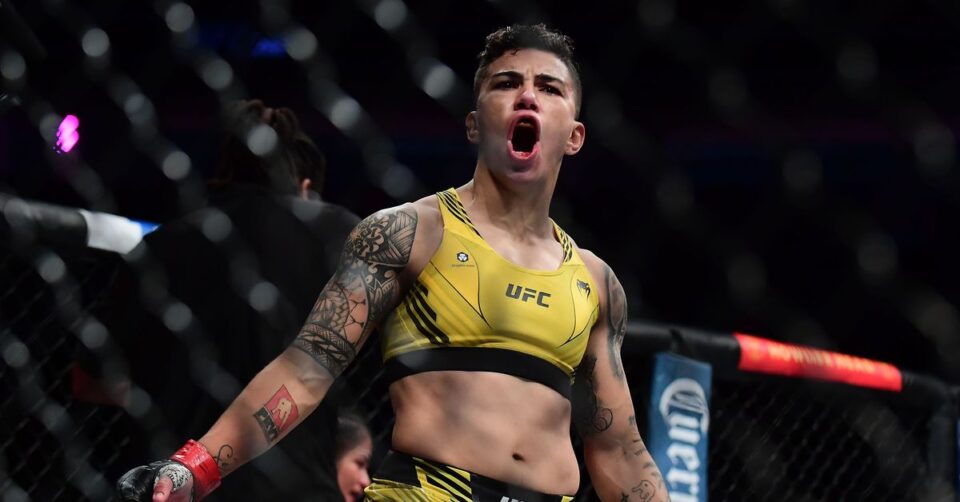 Jessica Andrade tore apart newly minted UFC strawweight champion Carla Esparza’s performance against Rose Namajunas at UFC 274, cutting a promo for the next shot at the belt with ex-champs Zhang Weili and Joanna Jedrzejczyk tied up.

Andrade, whose title reign was cut short by Zhang, dubbed the new titleholder the “champion of boredom” on Twitter and added “I can’t wait to rip your head off.”

Then, she remembered to tag Esparza.

The campaign opened with a reasoned argument for the title shot as Andrade cited Zhang and Jedrzejczyk’s scheduled meeting at UFC 275, potential opponent Marina Rodriguez’s previous loss to Esparza, and a little jab about some supposed heat.

Then Andrade turned up the temperature by going all-out on the UFC 274 co-main event, calling it the “worst fight in the division’s history” and “a disgrace to women’s MMA.”

Any of us would have put up a better fight than the champion of boredom did yesterday ‍♀️ Shame on the division. worst fight in the division’s history. @CarlaEsparza1 https://t.co/VhJVkbjdv8

There wasn’t much argument with Andrade from inside the MMA bubble. Industry vets and fighters panned the fight, and UFC President Dana White put the kibosh on an immediate rematch. It was Esparza’s sixth straight win in a comeback that started after a lopsided 2015 loss to Jedrzejczyk.

Andrade is less than one month removed from another career-high performance. In the headliner of UFC Vegas 52, she became the first UFC fighter to finish an opponent with a standing arm-triangle choke when she tapped Amanda Lemos with the move. It was her second straight victory following a loss to flyweight champ Valentina Shevchenko and her first fight at 115 pounds since a pair of losses to Namajunas and Zhang expedited her move up in weight.

With a new champion atop the division, Andrade sees a wide-open opportunity.

The logic of the game is basic… I already fought with all the best of the division and champions… Joana, Rose, Welli… Only Carla is missing… now the other girls still haven’t fought with the former champions tops…fight them first, then take your chance…

This F1 announcer thought he was talking to Patrick Mahomes. It was really Paolo Banchero

Gerda: A Flame in Winter Launches September 1 for Switch and PC