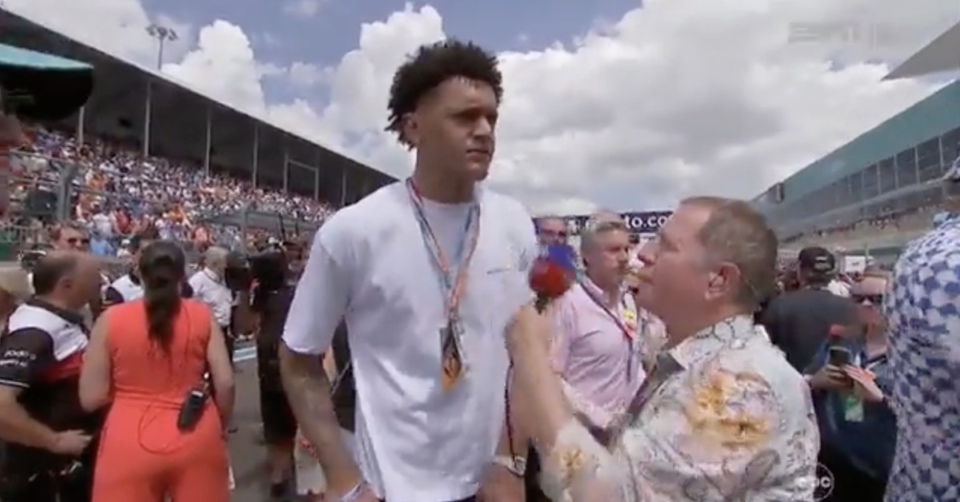 Paolo Banchero is already considered a household name to some sports fans. Banchero has been our No. 1 overall prospect in the 2022 NBA Draft class from the very start of the cycle. He maintained that status all year with a tremendous freshman season for Duke, where he helped lead the program to the Final Four in head coach Mike Krzyzewski’s last season.

Banchero is a lock to be a top-three NBA draft pick in June, but not everyone knows his name yet. Case in point: F1 announcer Martin Brundle thought he was talking to a different star athlete when he interviewed Banchero at the 2022 Miami Grand Prix.

Brundle apparently thought he was talking to Kansas City Chiefs QB Patrick Mahomes. Nope. The fact that Banchero is 6’10 and Mahomes is listed at 6’3 probably should have been a give-away.

Banchero actually used to be a star QB during his high school days in Seattle before he decided to focus on basketball. If he would have stopped growing at, say, 6’5, perhaps we’d be talking about him as a future No. 1 overall NFL Draft pick.

Brundle is British and a former F1 driver in the ‘80s and ‘90s. Apparently he wasn’t too invested in Duke’s Final Four run in Coach K’s last ever year.

Instead, Banchero feels destined to be an NBA star. We did a big breakdown of Banchero’s game and why we believe he deserves to be the top overall pick. Brundle should check it out. He’ll know who Banchero is before long.