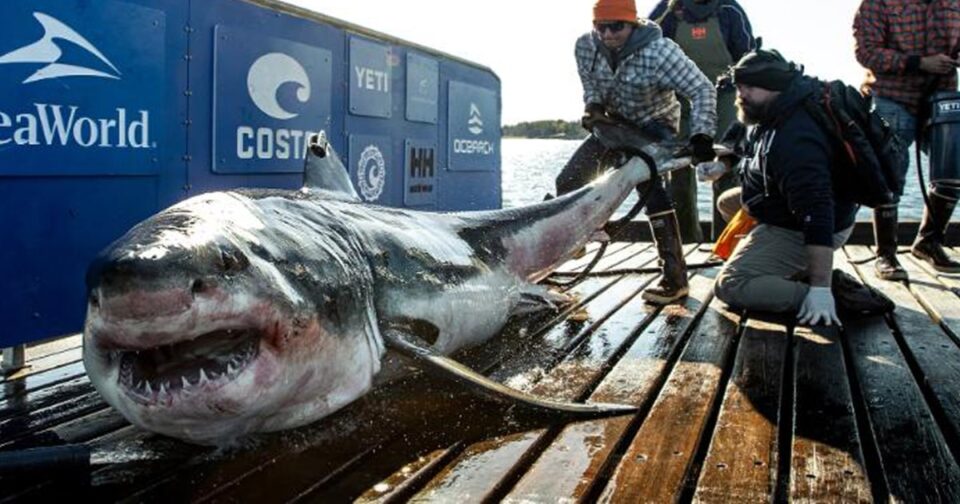 A great white shark from Canada is enjoying his early summer cruising up and down the Carolinas, and was last spotted on Monday near the Outer Banks, researchers said.

Since October, 2019, OCEARCH has been following the movements of Ironbound, a great white shark that was captured, tagged and released near West Ironbound Island, Nova Scotia.

The great white has been fitted with a tracking device that pings when he emerges to the water’s surface. He’s been traced as far south as the Straits of Florida and as far west as the Gulf of Mexico.

On March 21 and April 3, he emerged in waters off South Carolina and appeared to be headed north with April 18 and 25 appearances off North Carolina, OCEARCH data showed.

The next ping came on April 28 off the Jersey Shore before doubling back south.

Ironbound was last detected on Monday at 6:12 p.m. ET, emerging about 19 miles southeast of Cape Hatteras, according to his tracker.

The great white is slightly ahead of schedule in his quest to get back to Nova Scotia, where he’ll spend warm weather months feeding on seals to bulk up for the winter.

Ironbound likely ran into some colder waters off the Jersey Shore and turned around to wait for a summer warm up before continuing his northbound trek, researchers said.

“They hit that cold, cold water that’s trapped against the beach and they’re like, ‘Oh man, it’s too early,'” explorer and OCEARCH founder Chris Fischer told NBC News on Tuesday.

“They’ve got to wait for the water temperature to get warm enough so when they slide in there to eat the seals, that it’s not so cold that the energy to stay warm exceeds the energy they get from the seal.”

Crypto assets shed $800 billion in market value in a month