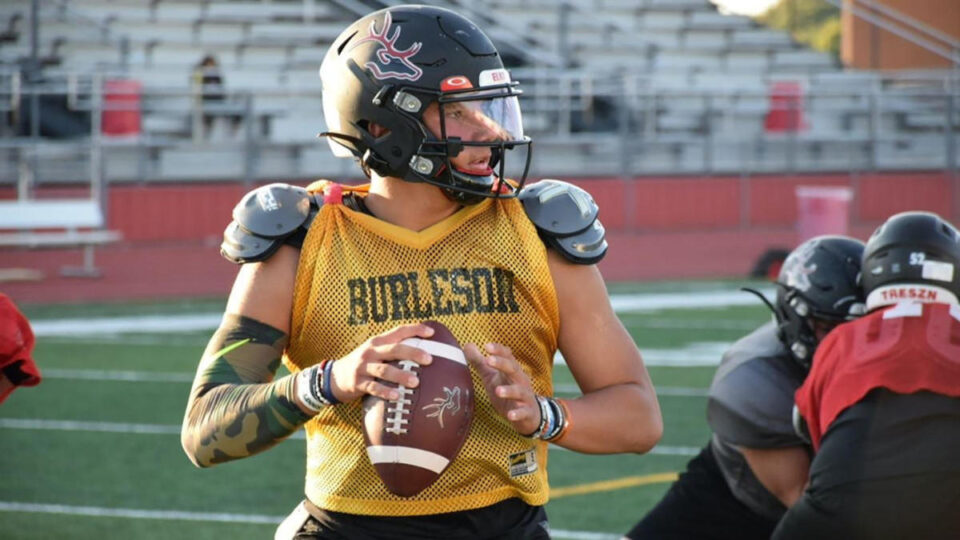 The college football world is in the midst of the 2023 recruiting cycle, but it’s never too early to start looking ahead. Dylan Raiola, a five-star prospect and the No. 8 overall player in the 247Sports Composite rankings, announced his commitment to Ohio State on Monday night. Raiola, the No. 1 quarterback prospect in the 247Sports rankings, chose the Buckeyes over Alabama, Georgia, Oregon and USC. He surprised everyone with the announcement during his birthday celebration.

“This two-sport athlete that also plays baseball has a nice athletic profile,” Singletary wrote. “He has a well proportioned build and frame. With his sturdy lower body he is able to generate power and velocity on his throws. As he continues to mature and grow he could top the scales at 235 pounds. His athleticism is good and should improve as he develops throughout his career.”

Raiola threw for 3,241 yards, tossed 32 touchdown passes and posted nine rushing touchdowns in 12 games as a sophomore despite his relative inexperience as a starter in high school.

“Raiola is a player who has very few holes in his game even though he has two more years of high school left,” Singletary wrote. “He is ahead of the curve with his mechanics and has the arm strength that puts him in elite company. Because of his ability, physical talent and positive traits, his talent positions him to play in any offensive scheme with high-level results. The more that he plays and has reps, his decision-making and feel will only get faster and become second nature. Being a Power Five starter for multiple years and possibly an all-conference selection seem destined for his future.”

Raiola made several unofficial visits this spring, which included a trip to the Ohio State spring game. He is the son of former Nebraska center and 14-year NFL veteran Dominic Raiola; despite the Cornhuskers not being listed among his finalists, he also attended the Nebraska spring game.

This commitment is huge for Buckeyes coach Ryan Day, who is looking to get a jump-start on the field in the race for the top class in 2024. Raiola is the first player to commit to the Buckeyes during the next recruiting cycle, the second five-star player to announce his decision and the highest-ranked committed player in his class. Highly ranked classes typically benefit from the snowball effect, and the foundation that Raiola established on Monday night could start a wave of high schoolers committing to the Buckeyes. Generally speaking, players are the most important recruiters during any cycle.

On the field, Raiola should be a star. Redshirt sophomore CJ Stroud could be off to the NFL after this season and sophomore Kyle McCord will likely step in if Stroud does move on. That should open the door for Raiola and current true freshman Devin Brown to square off for the top spot on the depth chart in 2024.

The quarterback position at Ohio State has become a launching pad to NFL success, and Raiola could be the next in line in Columbus.

Dorian Finney-Smith is the type of player every team needs

Why You Need TikTok in Your Small Business