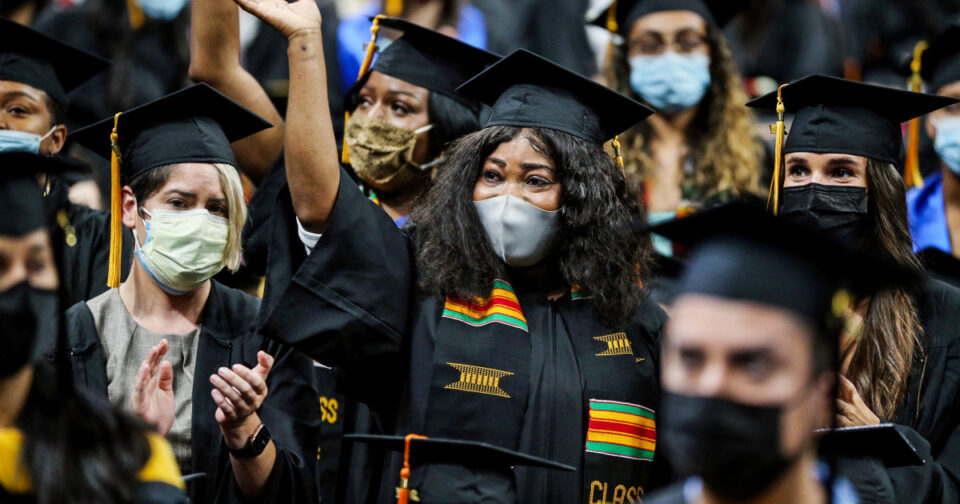 Sherita Brown’s parents both earned college and technical school degrees. Still, they could not afford to pay for her college education when the time came. So taking out student loans was inevitable for Brown, 40, who dreamt of becoming an optometrist.

“I figured with the income I would make once I graduated that it would make up for the loans that I took out,” she said.

Brown worked her way through college and paid some of her expenses out of pocket, alongside her loans. After graduating from the Pennsylvania College of Optometry in 2010, she has paid her balance down to $130,000, from $200,000. At one point, Brown’s student loans, both private and federal, went into forbearance, which prevented her from investing and even purchasing a home.

“When I looked at it, I was like, ‘This is insane,’’’ she said. “Like, I have paid a lot of money on them, and I still owe a whole lot more on the loans. It’s almost like, I didn’t even make payments.”

Brown is among the millions of borrowers who could benefit from some form of federal student loan forgiveness, which Black voters overwhelmingly support and President Joe Biden endorsed during his presidential run.

In March 2020, Biden said that if elected he would sign a pandemic-related relief bill pending in Congress that would “forgive a minimum of $10,000/person of federal student loans.” He has continued the pause on federal student loan payments during the pandemic that began under the Trump administration, most recently extending it to Aug. 31. He also seemed to signal, in an April meeting with members of the Congressional Hispanic Caucus, that he was open to canceling $10,000 per borrower or extending the moratorium.

While the extension may be a sigh of relief for many, it is only a temporary solution, particularly for Black student loan borrowers who are often forced to take on more debt to attend college. According to the Brookings Institution, Black borrowers’ reliance on loans to pay for higher education has contributed to the widening racial wealth gap. Four years after graduating, Black college graduates owe an average of $52,726, compared to white students who owe an average of $28,006​​, according to a 2016 report by the think tank.

Beyond the White House, Rep. Ayanna Pressley, D-Mass., is working with Sen. Elizabeth Warren, D-Mass., and Senate Majority Leader Charles Schumer, D-N.Y., to advocate for $50,000 of student loan relief, which would affect 80 percent of borrowers in the lowest-income brackets, Pressley said.

Like many Black borrowers, Pressley took out loans while attending Boston University and belonged to the one-third of Black students who defaulted on their loans. While she eventually paid off her debt, Pressley said that the student loan crisis disproportionately affects Black borrowers and has exacerbated the country’s racial wealth gap.

“I’ve spoken to borrowers who said that, because we paused those payments during the pandemic, many of them became first-generation homebuyers,” she said. “So when you see that kind of impact during a pandemic just with a pause, imagine how transformational it will be when we see broad-based student loan debt cancellation.”

While Black students are disproportionately burdened by student debt, Black women face a particularly heavy debt load, according to a report by The Education Trust, a nonprofit that advocates closing the opportunity gap for students of color from low-income families. Besides making less than other college-educated white women and Black and white men, Black women are also more likely to be parents in school, often burdened by costs related to child care that can result in them borrowing more for college, the report stated.

Brittani Williams, a senior policy analyst in higher education at The Education Trust and co-author of the report, said that upward mobility, particularly for Black women, is often unattainable because of student loan debt and that they are less likely to receive financial assistance from family to pursue higher education.

Among those dedicated to helping Black women handle their student loans and other financial obstacles is Kara Stevens, founder of the Frugal Feminista and author of “Heal Your Relationship With Money.” Stevens built the website to share her own story of paying off student debt while helping women navigate their own finances.

While forgiving $10,000 for borrowers would be “a step in the right direction” by Biden, Stevens said it also leaves room for a conversation about using the opportunity to build wealth.

“This is like one of the ways that this can actually equalize when guided in a thoughtful way for us to address generational wealth, Black wealth gaps, because it looks to, ‘Why are certain groups of people taking out loans versus others?’” she said. “So this onus of personal responsibility is a misspeaking of a larger structural issue that disproportionately affects people who never had money to begin with, or who don’t benefit from generational wealth.”

Although student loan forgiveness is aimed at helping borrowers with outstanding balances, it leaves those who paid off their debt, like Andreá Christopher-Young of Los Angeles, to question how they will be affected. After graduating with a master’s degree in accounting, Christopher-Young, 31, said she had accumulated about $30,000 in student loan debt, which she paid off in October 2021 through monthly payments and money she stockpiled from her savings during the pandemic.

“Candidly, no, it’s not fair,” she said regarding student loan forgiveness, “but at the same time, we took it upon ourselves to just pay it off, not thinking that the government would actually forgive them.”

“But at the same time, I don’t really think we should be at a disadvantage because we did pay them off, which is basically where we would be at if they forgive everybody else’s,’’ she added.

Although she is open to student loan forgiveness, Christopher-Young said college students should be better informed about student loans and interest rates.

As for Brown, while $10,000 in forgiveness would be helpful, she said it wouldn’t make a huge difference because of the amount she owes. Brown, who did become an optometrist, also said if she were able to go back and revisit how she paid for her education, she would not have taken out student loans but would have worked to save enough money before going to college.

“I feel like I can’t do as many things as I would like to do,” she said, “I have two kids, and one of them will be going to college. I don’t want to still have to be paying my student loans when she starts school. I’m trying to make sure I’m positioning myself and positioning her where she won’t have to rely on student loans.”

The 30 Best Workout Shoes for Every Kind of Sweat Session