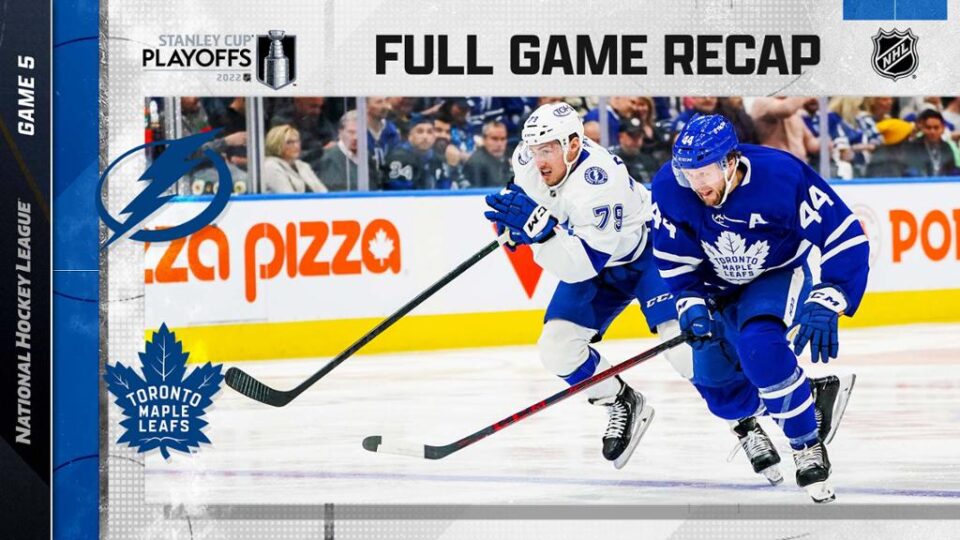 TORONTO — Auston Matthews broke a third-period tie, and the Toronto Maple Leafs defeated the Tampa Bay Lightning 4-3 in Game 5 of the Eastern Conference First Round at Scotiabank Arena on Tuesday.

The Maple Leafs took a 3-2 series lead and pushed the two-time defending Stanley Cup champions to the brink of elimination. Game 6 in the best-of-7 series is at Tampa Bay on Thursday.

“That felt good,” Matthews said. “Just the crowd, the energy, there’s nothing like a playoff atmosphere especially here in Toronto. It was pretty special. It was a big win for us but there’s still some work to be done. It’s a good night just to battle back down two goals, never losing hope and just competing but like I said, the job is not done.”

Mitchell Marner shot on a 2-on-1 leading to a rebound in the slot that Matthews put past goalie Andrei Vasilevskiy for the lead at 13:54 of the third for the Maple Leafs, who trailed 2-0 after the first period.

William Nylander had a goal and two assists, John Tavares had a goal and an assist, and Jack Campbell made 32 saves for Toronto, the No. 2 seed in the Atlantic Division.

Steven Stamkos and Victor Hedman scored, Nikita Kucherov had two assists, and Vasilevskiy made 21 saves for Tampa Bay, the No. 3 seed in the Atlantic.

The Lightning are 16-0 since the beginning of the 2020 Stanley Cup Playoffs following a loss.

“We’re here to win the series,” Tampa Bay coach Jon Cooper said. “We lost a game tonight; we let this one slip away, that’s on us. But we haven’t let the series slip away; we let a game slip away so that’s how you look at it. Play it game by game.”

Stamkos put the Lightning up 1-0 5:19 into the game when he shot from the slot past Campbell’s blocker.

Hedman made it 2-0 at 6:11 when he took a pass from Kucherov and shot from the high slot on the power play.

Toronto killed off a 30-second 5-on-3 power play beginning at 11:17 when Mark Giordano was assessed a minor penalty for cross checking with Nylander already in the penalty box for holding.

The Lightning outshot the Maple Leafs 14-4 in the first period.

“We knew that they were going to push and you have to give them credit,” Stamkos said. “It was a tremendous start for us, the start we wanted. It’s usually one of those bad omens when you get an extended 5-on-3 and you don’t score, I always say that’s kind of a rule. It wasn’t for lack of looks, we had some unbelievable looks and that could kind of ice the game early, go up 3-0 so I was disappointed that we didn’t execute. We just sat back too much and got away from our game plan.”

Tavares cut the lead to 2-1 at 3:35 of the second period when he deflected a shot in the slot from Nylander on the power play.

Campbell stopped Nicholas Paul on a breakaway at 15:18 to keep the score 2-1.

“He kept us in the game,” Nylander said. “I mean he’s been doing that all year. It’s incredible to see him make huge save regardless of the score. I think he’s been incredible, and we just have to help him next game.”

The Maple Leafs scored twice in 1:13 in the third period to take the lead, with each goal coming at 4-on-4.

Morgan Rielly tied it 2-2 at 3:01 when he one-timed a pass from Tavares at the right hash marks.

Nylander put Toronto up 3-2 at 4:14 when he took a pass from Ilya Mikheyev and shot past Vasilevskiy’s glove from the left face-off dot.

“We’re not really making them earn it, we’re kind of giving it to them,” Cooper said.

Ryan McDonagh tied it 3-3 at 8:17 when he one-timed a pass from Ross Colton from the left hash marks over Campbell’s blocker.

“That’s the best team in the NHL in the third period in terms of not giving up much and defending leads and they certainly know how to win,” Toronto coach Sheldon Keefe said. “We got some ice at 4-on-4 and it was a big time play by John to (Rielly), great play by (Mikheyev) to (Nylander) and an incredible shot and all of a sudden you have a lead.

“We gave that back to them but then another big time play by Mitch and Auston connecting there. That’s what you’re looking for at key times, a big game like this, you need to best people to step up and make a difference and they certainly did that. And Jack Campbell was probably the key to this whole thing here today. He kept them at two for a long time and gave us a chance to come back.”

NOTES: The Maple Leafs earned a multigoal comeback playoff win against a defending Stanley Cup champion for the second time in their history, after their win against the Montreal Canadiens in Game 4 of the 1945 Semifinals. … Toronto hasn’t won a playoff series since 2004, losing six straight series. … Matthews scored his fifth game-winning playoff goal.