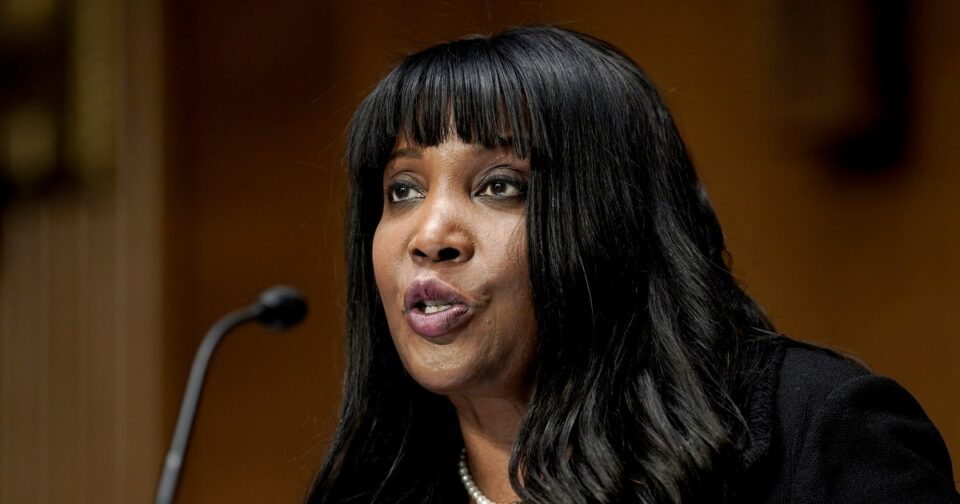 WASHINGTON — The Senate confirmed economist Lisa Cook on Tuesday night to serve on the Federal Reserve’s Board of Governors, making her the first Black woman to sit on the panel in its 108-year history.

Cook was confirmed in a 51-50 party-line vote, with Vice President Kamala Harris breaking the tie.

She will join the Fed at a challenging time as the central bank tries to rein in inflation. Last week, the Fed raised its core interest rate as it battles inflation levels that are now at 40-year highs.

“As President Biden said today, addressing inflation remains a top priority of the Biden-Harris Administration, as we work to lower costs for hardworking families,” a White House official said in a statement after the Senate vote. “It is important to have a fully-staffed Federal Reserve who can take on these challenges for the American people.”

The board plays a key role in setting the central bank’s monetary policy.

Cook, an economics and international relations professor at Michigan State University, was elected this year to the Federal Reserve Bank of Chicago’s board of directors. She served on the White House Council of Economic Advisers in the Obama administration and was a member of the Biden transition team.

Her research interests include economic development, innovation, financial institutions and markets, and economic history, and she has written about how Jim Crow laws affected long-term growth of the U.S. economy.

In a November 2020 article published by The New York Times, Cook wrote about how “discrimination inflicts a staggering cost on the entire economy,” citing research that showed the far-reaching economic costs of racism.

Biden had the unusual opportunity to nominate three members to the Fed board after an unfilled vacancy was left over from the Trump administration.

When Biden announced his nominees this year, he said in a statement that they would “bring much needed expertise, judgement and leadership to the Federal Reserve while at the same time bringing diversity of thought and perspective never seen before on the Board of Governors.”

“She’s a great Georgian. She comes from a family chock-full of achievers, and she’s going to do a great job,” he said.

“Since we know very little about her views on inflation, my grave concern is that Professor Cook will serve as an inflation dove on the Fed at a time when American families continue to be ravaged by these price increases,” Toomey said on the Senate floor before the vote.

Republicans are focused on making inflation a top campaign issue heading into the November midterm elections, when they hope to retake the House and the Senate.

Biden has other Fed nominees awaiting confirmation votes. Senate Banking Committee Chairman Sherrod Brown, D-Ohio, told reporters Tuesday he expects Fed Chairman Jerome Powell — who was nominated in January for a second term — and Philip Jefferson, who would become the fourth Black man to serve on the board, to be confirmed this week.

Their confirmation votes have not been scheduled yet.