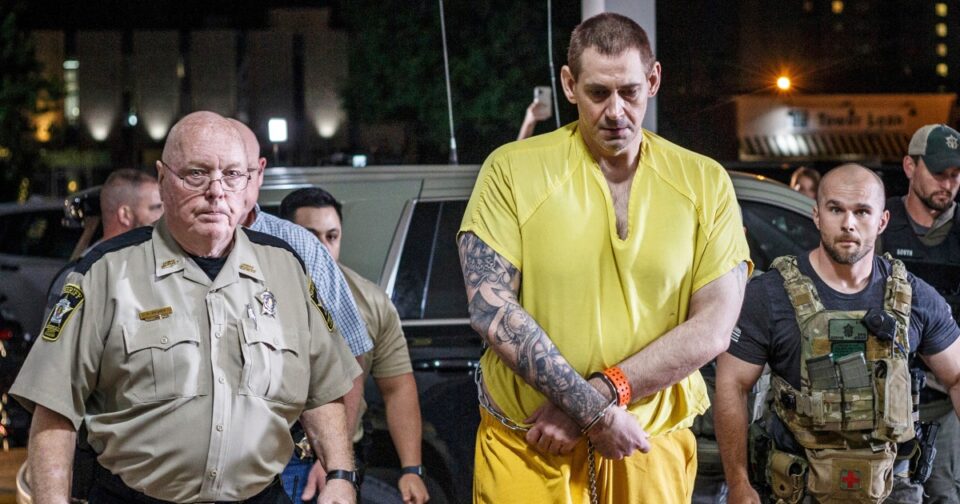 After they eluded authorities for more than 10 days and made it about 300 miles north from Alabama to Indiana, the end came swiftly for former corrections officer Vicky White and the capital murder suspect she was accused of helping escape, Casey White.

Police found Vicky White and Casey White, who are not related, hiding out at a motel in Evansville, Indiana, where they had hunkered down for several days after fleeing together from an Alabama jail on April 29, according to Vanderburgh County, Indiana, Sheriff Dave Wedding.

In six different vehicles, police chased the pair for about 2 miles, with multiple law enforcement vehicles ramming the Cadillac sedan the couple were traveling in until it flipped onto its side in a ditch, Wedding said.

“Airbags are going off,” she is heard saying in the audio released by police. “Let’s get out and run. Should have stayed at the … hotel.”

Casey White was taken into custody after the crash.

Four handguns and several semi-automatic weapons, including an AR-15, were recovered from the couple’s car, authorities said. Casey White intended to have a shootout with police, Wedding said.

NBC News has pieced together the movements of Vicky White and Casey White during their days on the run by interviewing officials and reviewing public statements and records from the time they disappeared until they ran out of luck this week in southwest Indiana.

Vicky White, 56, the former assistant director of corrections at the Lauderdale County Jail in Florence, Alabama, has been called the “mastermind” behind the escape by Lauderdale Sheriff Rick Singleton.

Singleton said White, a once highly respected employee who planned to retire the day of her disappearance, made moves that morning that gave the pair a head start on trailing law enforcement.

Authorities said she was involved in a two-year relationship with inmate Casey White, 38, who was facing capital murder charges in the stabbing death of Connie Ridgeway, 58.

He was already serving time in state prison on other convictions when he was indicted in the 2015 killing, officials have said. He was taken back to Lauderdale County for trial in the murder case.

The day they disappeared, Vicky White cleared out deputies from the jail who transported inmates, Singleton said. She then escorted Casey White by herself, even though policy required that two deputies transport such inmates, he said.

Their cover story was that Casey White had to go to court for a mental health evaluation. But no such evaluation was ever scheduled. The plot unfolded on a Friday — the court’s busiest day, Singleton said.

Vicky White’s knowledge of the inner workings of the jail and the court system gave the couple a six-hour head start before the sheriff’s department even realized the two had vanished together, Singleton said.

He added that before her disappearance, Vicky White sold her home and had access to about $90,000.

She bought a Ford Edge the pair used to get out of the state. It was one of several cars the couple bought, then ditched, during their time on the lam.

On the morning of the disappearance, officials said, Vicky White was seen on video checking out of a Quality Inn in Florence, Alabama.

“This is probably the most bizarre thing I’ve ever been involved in,” Singleton said. “I’ve seen a lot of stuff over my career. This is not the first escape that I’ve been involved in. But I’ve never seen anything that was calculated and planned and executed the way this escape was.”

Singleton said the couple’s alleged plotting was like “chipping away at a rock wall.”

The fugitives remained a step ahead of authorities for the better part of a week.

On May 1, two days after the couple disappeared, investigators began piecing together that Vicky White had recently bought the 2007 Ford Edge, Singleton said. The following day, with the help of the U.S. Marshals Service, authorities confirmed the pair had fled in that vehicle.

The next big break in the case came Thursday, when investigators found the Edge abandoned on the side of a road in Williamson County, Tennessee. Authorities said the couple ditched the Edge the day they disappeared.

With tens of thousands of dollars on them, Vicky White and Casey White purchased a Ford F-150 near Bethesda, Tennessee. They used it to get out of the state and were next tracked down in Indiana, officials said.

A desk employee at Motel 41, where the couple were hiding out before they got caught, said a man rented a room for the couple on May 2.

The employee, who asked not to be named, said the motel did not have the names Vicky White or Casey White on its logs. The fugitives had paid a transient man to book the room for them, said Wedding, the Vanderburgh County sheriff.

On Monday, the couple paid cash for an additional week’s stay at the hotel, the motel worker said. She noted she had seen Vicky White wearing a wig around.

“Nobody knew they were escaped or fugitives or none of that stuff until yesterday when they got caught,” the worker said.

Daily rates at the motel were about $63.

The couple appeared to be in Indiana for about a week.

Security video obtained by investigators showed Casey White on May 3 at an Evansville car wash, where the F-150 pickup purchased in Tennessee was abandoned. Video also shows the Cadillac used by the pair, which officials say was purchased in Indiana, at the car wash.

The pair used at least three cars, two of which were ditched, during their time on the run, officials said.

In addition to the weapons found in the couple’s Cadillac, authorities said there were also wigs and $29,000 in the vehicle.

Neither sheriff, Wedding nor Singleton, said they knew what the couple’s ultimate plan was or whether their path north from Alabama had any real destination.

The U.S. Marshals Service said that when Casey White got out of the Cadillac on Monday, he exclaimed: “Please help my wife. She just shot herself in the head, and I didn’t do it.”

Singleton said: “I don’t know if Casey White is going to be cooperative in that regard or not. … It would be nice to know what they had in mind.”

Singleton believes their plan to escape stalled in Indiana because they realized they were in peril every minute they were in public.

“All the national media attention drove them underground. They had to lay low because their descriptions are out there,” Singleton said. “That’s why they were holed up in that motel for several days.”