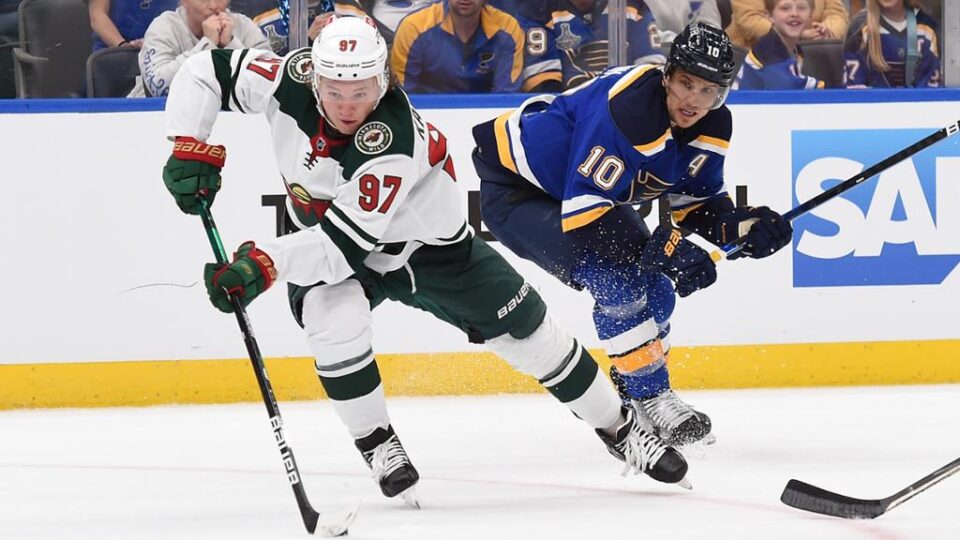 Welcome to the Stanley Cup Playoffs Buzz, a daily in-depth look at the 2022 NHL postseason. There are four playoff games scheduled for Thursday, the 11th day of the postseason.

Goalie Jeremy Swayman will start again for the Bruins, who look to avoid elimination in Game 6 at home. Since the rookie took over for Linus Ullmark in Game 3, he is 2-1 with a 2.68 goals-against average and .911 save percentage. Seven Boston players have scored at least one goal; Carolina has 11. The Hurricanes have a chance to win their ninth consecutive best-of-7 series that was tied 2-2 and are 5-4 in Game 6 on the road. Boston is 8-9 in Game 6 at home. The Hurricanes have scored first in each game and forward Nino Niederreiter has been held without a shot on goal for two straight games. Carolina went 3-for-3 on the penalty kill after going 7-for-9 in a Game 4 loss Sunday.

The two-time defending Stanley Cup champions are on the brink of elimination in Game 6. Tampa Bay was defeated 4-3 in Toronto on Tuesday is 16-0 following a loss since winning a round-robin game to begin the 2020 Stanley Cup Playoffs. The Maple Leafs are looking to win their first playoff series since 2004 and have lost their past six. Goalie Jack Campbell has a .895 save percentage and Lightning goalie Andrei Vasilevskiy is .880 in the series. Toronto is fourth in the postseason with 4.00 goals per game. Tampa Bay is 4-4 in Game 6 of a best-of-7 at home and Toronto is 10-7 on the road. The Maple Leafs are 0-7 with an opportunity to advance to the second round since a 7-4 loss to the Boston Bruins in Game 7 of the 2018 first round.

Jordan Binnington is expected to make his third straight start for the Blues, who look to close out the Wild in Game 6. Binnington is 2-0 with a .935 save percentage in this series after losing his previous nine postseason starts. The Blues are also getting heathier at the right time; defensemen Nick Leddy (three games missed) and Robert Bortuzzo (two games) each returned from an upper-body injury in Game 5. Minnesota goalie Marc-Andre Fleury needs one playoff win to pass Grant Fuhr (92) for sole possession of third place in NHL history. The Wild are 0-1 in Game 6 of a best-of-7 on the road; the Blues are 9-9 at home.

The Oilers are on the brink and will be without defenseman Darnell Nurse, who received a one-game suspension for a head-butt against Kings forward Phillip Danault in the second period of Game 5. Edmonton is winning the battle on special teams, going 7-for-17 on the power play and 20-for-22 on the penalty kill and is third in the postseason with 4.20 goals per game. Leon Draisaitl (seven points; five goals, two assists) and Connor McDavid (nine points; two goals, seven assists) have each been a driving force but more is needed throughout the lineup with Evander Kane the only other skater with more than two goals. The Kings have been led offensively by Phillip Danault (three goals, two assists), Adrian Kempe (two goals, three assists) and Trevor Moore (two goals, three assists). Los Angeles is 13-4 in Game 6 of a best-of-7 at home and has won six of its previous seven series after going ahead 3-2 when it was tied 2-2, the loss coming in the 1968 Quarterfinal Round. Edmonton is 5-2 in Game 6 on the road.

What We LearnedRangers’ response fuels belief

Filip Chytil said the New York Rangers’ belief in their ability to win Game 5 and force Game 6 never wavered even after a 7-2 loss in Game 4 on Monday that followed a 7-4 loss in Game 3 last Saturday. “We just had a good meeting, good practice yesterday and we just believed today that we were going to win and go back to Pittsburgh.” It took the Rangers until late in the second period to turn that belief into something tangible, but they did it by rallying from down 2-0 to take a 3-2 lead in a span of 2:42. They rebounded again after Jake Guentzel scored to make it 3-3 with 1:54 remaining in the period. And they responded with a strong third that featured a power-play goal from Chytil at 2:53 and an empty-net goal from Ryan Lindgren at 19:44 to win 5-3. PPG Paints Arena was a house of horrors for the Rangers in Games 3 and 4, but perhaps things will be different in Game 6 after their response in Game 5. They showed what they’re capable of facing elimination. — Dan Rosen, senior writer

All Pittsburgh Penguins coach Mike Sullivan would say about the nature and extent of Sidney Crosby’s status was that the center will be evaluated for an upper-body injury upon returning home. But the fact that Crosby did not return to Game 5 at Madison Square Garden after leaving with 5:43 remaining in the second period is certainly alarming when projecting his status for Game 6 on Friday. What’s also alarming is how the Penguins responded once Crosby left the game. They clearly missed him, as they would any time their captain and best player isn’t available. Crosby has been a dynamic presence on a shift-by-shift basis all series and leads the Penguins with nine points (two goals, seven assists). It’s too early to know with any certainty if he will or won’t play in Game 6, but if it’s the latter the Penguins will have to find a way to regather themselves without the player who has given the Rangers the most fits. — Rosen

The Florida Panthers led the NHL with 29 come-from-behind wins during the regular season, including nine from down multiple goals, so everyone should know by now that no lead is safe against them. But the Panthers provided another reminder in a 5-3 victory against the Washington Capitals in Game 5 of the Eastern Conference First Round on Wednesday. After falling behind 3-0 in the second period, they scored five unanswered goals to take a 3-2 lead in the best-of-7 series. Carter Verhaeghe had a hand in all five goals, scoring two and assisting on the other three for Florida, which moved within one win of advancing in the Stanley Cup Playoffs for the first time since 1996. “With our group, we’ve been there,” Panthers coach Andrew Brunnette said. “I really felt we were skating there, and I thought we started taking over the game like we’ve done so many times this year and showed our resiliency and belief that we’re in any hockey game.” — Tom Gulitti, staff writer

The Capitals’ sloppiness with the puck after they took a 3-0 lead on T.J. Oshie’s 2-on-1 goal 3:38 into the second period was its demise. Oshie’s turnover at the red line led to Verhaeghe’s goal that started the Panthers’ comeback 6:50 into the second. Then John Carlson fanned on the puck in the offensive zone, leading to Patric Hornqvist’s breakaway goal at 12:27 that made it 3-2. Sam Reinhart tied it with 5:19 left in the second after Washington was unable to clear the puck from the front of its net. “If you play against a team like Florida that is a high-octane team, we are just feeding them and we can’t,” Capitals coach Peter Laviolette said. Washington must find a way rebound in Game 6 at home on Friday to avoid being eliminated in the first round of the playoffs for the fourth straight season. — Gulitti

The Dallas Stars adjusted their forward lines hoping for more offense in Game 5. It worked for Jason Robertson, the left wing who moved off the top line with center Roope Hintz and right wing Joe Pavelski to the second line with center Jamie Benn and right wing Tyler Seguin. Robertson scored his first NHL playoff goal to give Dallas a 1-0 lead in the second period before the Calgary Flames responded with three unanswered for a 3-1 victory and a 3-2 lead in the series. The Stars couldn’t generate a lot of good scoring opportunities. — Tracey Myers, staff writer

The top line of left wing Johnny Gaudreau, center Elias Lindholm and right wing Matthew Tkachuk wasn’t doing much in Game 5. But here’s the thing: top lines can cancel each other out in the playoffs, so you need others to score. Calgary got that with a combined four points (two goals, two assists) from second-line forwards Andrew Mangiapane and Mikael Backlund. One of the Flames’ strengths is their depth, and it came through for them Wednesday. — Myers

About Last NightNew York Rangers 5, Pittsburgh Penguins 3Chytil scored his first Stanley Cup Playoff goal in his eighth game and the Rangers avoided elimination in Game 5 at Madison Square Garden on Wednesday. Crosby sustained an upper-body injury after taking a hard hit from New York defenseman Jacob Trouba in Pittsburgh’s offensive zone at 9:15 of the second period. The Rangers scored three goals in 2:42 late in the second to take the lead after Crosby took his final shift. Guentzel scored twice for Pittsburgh.

Verhaeghe’s five points helped the Panthers take a 3-2 lead in the best-of-7 series. Claude Giroux had a goal and an assist, Aleksander Barkov had two assists and Sergei Bobrovsky made 30 saves for Florida, winner of the Presidents’ Trophy as the team with the best regular-season record. The Panthers won an NHL-record five games this season after trailing by at least three goals. Oshie scored twice for Washington.

Mangiapane and Backlund each had a goal and an assist. Mangiapane gave Calgary a 2-1 lead at 10:38 of the third period on a shot from the slot. Jacob Markstrom made 20 saves for the Flames. Jake Oettinger made 29 saves for the Stars. The Flames are 7-3 in a best-of-7 series when winning Game 5 to break a 2-2 tie. Three of the wins were in six games. Dallas has been outshot 182-127 in the series.