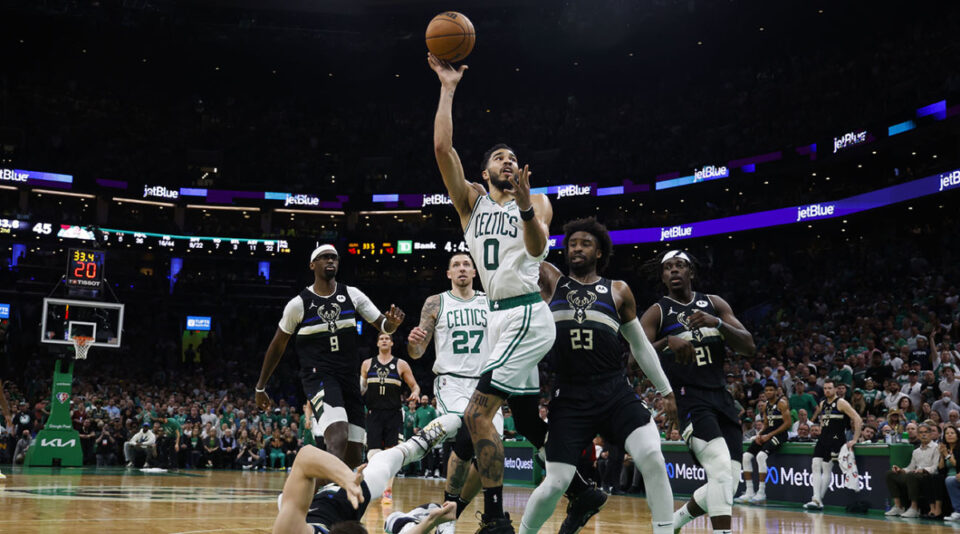 It is often said that anything can happen in Game 7.

After blowing a 14-point fourth-quarter lead in Game 5 at TD Garden in Boston to fall behind in the series 3–2, it was fair to wonder if the Celtics had thrown their season away. But after winning by 13 in Milwaukee in Friday night’s Game 6, the Celtics returned to the Garden in Sunday’s Game 7 looking to advance to their fourth Eastern Conference Finals in the last six seasons.

And that’s exactly what they did.

The Celtics hit an NBA Game 7 record with 22 three-pointers to take down the defending NBA champion Bucks 109–81, earning a date with the Heat in the Eastern Conference Finals.

Jayson Tatum followed up his 45-point game six with another efficient offensive performance. The Celtics star finished with 23 points on 7-for-14 shooting. But when Tatum exited the floor with his fourth foul early in the third quarter, Boston needed someone to step up.

Enter Grant Williams, a 41% three-point shooter in the regular season, who entered the starting lineup in Robert Williams’s absence and had struggled from the floor in this series.

Williams was due for a big night, and he picked a great time to bounce back offensively. Williams finished with 27 points on 10-for-22 shooting and hit a playoff-best seven threes to help the Celtics pull away in the second half. Williams was the best shooter on the floor for most of the final two frames, and was instrumental in sending the Celtics past the defending champion Bucks and into the conference finals.

Giannis Antetokounmpo finished Game 7 with 25 points, 20 rebounds and nine assists, but struggled in the second half from the floor as the Celtics’ defense swarmed the two-time league MVP.

With the Bucks now heading home, there will be a new NBA champion at the conclusion of this playoffs, and after their latest performance, the Celtics remain alive, aiming to bring another championship banner to Boston.