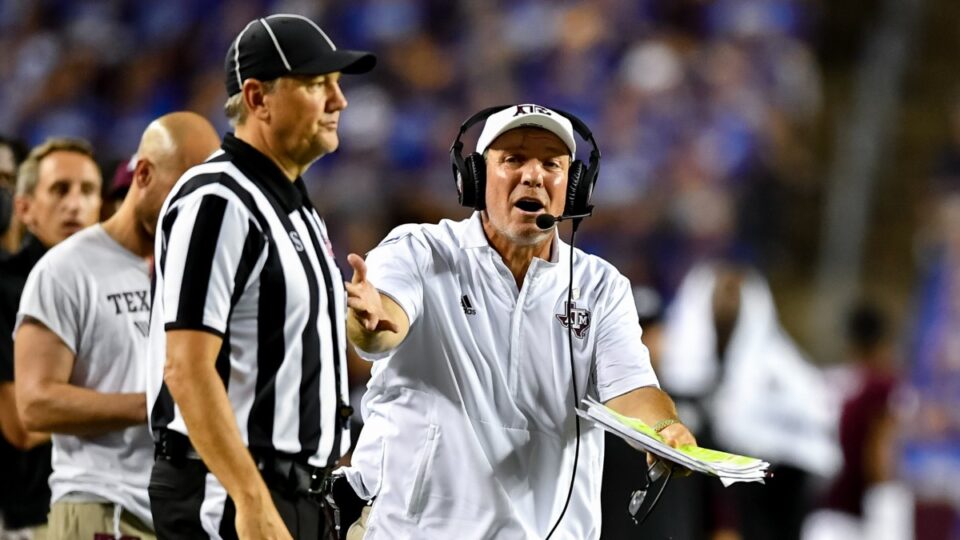 During an interview with Simmons, Fisher was asked about Saban’s recent comments alleging the Aggies got the nation’s No. 1 recruiting class by paying players through their use of NIL partnerships. Fisher bristled at the accusations, saying that only one of the 11 early enrollees from his most recent recruiting class has received an NIL deal.

“It was written on social media. … So everybody believed it,” Fisher said. “All the people obviously believed it. I went and checked with our compliance people—because we have nothing to do with it—one guy, of the early enrollees.”

When asked about the perception that Texas A&M has access to large amounts of money via NIL funds, Fisher accused the media at large—and Simmons specifically—of failing to do their due diligence.

“When they said we had $35 million in the [NIL fund]—it’s all false,” Fisher said. “It was written on social media so everybody believes it. You’ve got news channels believing it, and you believed it.”

Simmons adds that Saban, apparently, believes it, too, but Fisher pushed back at the longtime reporter.

“Well, he’s not news. You’re news, you’re media. Did you guys not research? I’m asking you, did you do your research? No, see, you can’t answer. So you just assumed,” Fisher said. “And that’s the way this world goes now: As soon as it’s written on social media and someone says it, you believe it. So where does that put you guys as reporters?

“What’s the truth? Nobody wants the truth. You want a story and a click and a hit.”

After Fisher is met with silence, he seemed to take amusement out of Simmons’ avoidance of his questions.

“See, I threw you off your game right now. You’re off your game, you’re out of questions,” Fisher said while laughing at Simmons.

At one point, somebody off camera can be heard giving advice to Fisher on how to answer Simmons’ follow-ups. Fisher cuts then off and waves his hand at them, shouting, “Just let me handle it!”

The clip ends with Simmons asking Fisher if he had spoken with Saban since the Alabama coach’s comments, which he said he has not. Saban has since apologized publicly for his remarks, but Fisher appeared disinterested in opening up a dialogue with his former boss.

“I should have never singled anybody out,” Saban said. “That was a mistake and I apologize for that part of it … I really wasn’t saying anybody did anything illegal in using NIL. That was something assumed by what I said. It’s not what I meant. There’s nothing illegal about doing this. It’s the system. That’s the issue I have.”