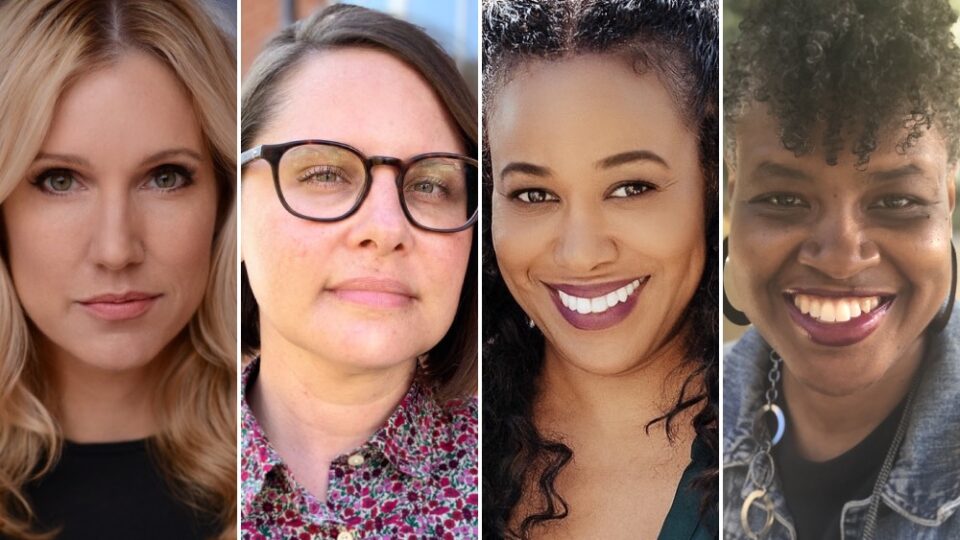 The prize sponsored by Maida Lynn’s Genuine Article Pictures was established to help lift the financial burdens on indie film producers and to help build the independent film community through leadership and mentoring. It’s different from other filmmaking grants in that it supports the producer and is not based on a project or specific work. Each of this year’s recipients will receive an unrestricted grant of $50,000, attend a retreat focused on rest and community building, and commit to mentoring an emerging producer for one year.

Dear Producer is a digital platform founded by producer Rebecca Green, which was established to amplify the voices of independent producers and help make the industry more sustainable. The platform looks to to challenge archaic business models that stifle diverse and original voices, and to advocate for innovation, transparency and fiscal responsibility from the industry. Finalists for its inaugural Dear Producer Award included Jameka Autry (Through the Night), Diane Becker (Navalny), Beth Levison (The Martha Mitchell Effect) and Danielle Varga (Bulletproof).

EXCLUSIVE: Chris Labadie (Walker) and Kahyun Kim (Cocaine Bear) have signed on to star in Above the Clouds—the first feature directed by Emmy-winning producer Jon Hill of Fox Sports Digital.

The indie dramedy heading into production this summer is about a lost dog, a cassette tape and a backyard comedy show that lead two Asian American strangers, Jay (Labadie) and Dani (Kim), on a journey of growth and self-discovery. Justin Oberman, Dan Riesser and Sean Cook will produce the pic written by Hill.

EXCLUSIVE: Uncork’d Entertainment has acquired rights to Erwin Budiono’s animated film Riki Rhino, D.M Cunningham’s supernatural horror film 3 Demons and Neil Mackay’s revenge thriller, Death Hunt. While the company plans to release the first two titles across physical and digital platforms in July, its plans for the latter have not been disclosed.

Riko Rhino tells the story of a young rhinoceros named Riki that has his horn stolen. To get it back, he embarks on an exciting adventure through the rainforest with his friend Beni the duck. Along the way, Riki helps other animals in trouble and every time he helps, he is rewarded with a new skill that will help him on his quest. The family film features the voices of Jennifer Castle, Paul Reynolds, Matt Nipperess, Russell Wait, Nathan Korval, Megan Leung and Catherine Fu.

3 Demons centers on a Deputy that is tasked with watching over the body of a recently deceased woman until her family can arrive and claim her. As his curiosity gets the better of him, he inadvertently concludes an unfinished ritual. The conjuring now complete, strange and sinister forces begin to target him. And as his past is unearthed, he’s forced to face his own demons, with terrifying consequences. Peter Tell, Haley Heslip, Laura Golinski, Jovonnah Nicholson, Zoë Cunningham and Sherryl Despres star.

In Death Hunt, a land developer and his mistress, traveling to their weekend retreat, are taken hostage by a group of men and brought to a remote island. There, they fight for survival, as the men release them into the wild and hunt them for sport. The film’s ensemble includes Omar Tucci, Rick Amsbury, Michael Coughlan, Marlene Malcolm, Greg Johnston, Frank Ieraci, Terry McDonald, Peter Lewis, Sam Slessor and Mason Cromwell.

Instant Karma tells the story of Jeff (Stew Jetson), a young man at rock bottom, who works as a rideshare driver to make ends meet. When his car breaks down, he gets a loaner car and stumbles into a string of magical good fortune. His turnaround starts with one good deed to a homeless man which results in him being rewarded multiple times more. Jeff’s luck, good fortune, magic, whatever you call it, is like an incredible wave that he wants to ride for all it’s worth, but he’s afraid it will end. It does, several times, but then it starts back up again. If he could only figure out what’s causing it. Scott Gore and Matt Midgette wrote the pic, which also stars Samantha Belle, Nancy Mercurio, Karl Haas, Ac Larkin and Keegan Luther. Patel, Anthony Casanova and Michael Casanova served as its producers.

Freestyle Digital Media negotiated the deal for Bridges with Carlos Hernandez of Ikigai Management, negotiating the Instant Karma deal with Patel of Applied Art Productions. Watch the trailers for both films below.

EXCLUSIVE: 1091 Pictures, a Chicken Soup for the Soul Entertainment company, has acquired worldwide rights to Greg Mallozzi’s feature documentary, Mind Traveler, with plans to release it across digital platforms next spring.

The doc’s subject is the brilliant and mysterious parapsychologist, Andrija Puharich. After learning about the CIA’s interest in psychic phenomena, Puharich creates a study to prove his theory that children can be the greatest psychics in the world. He seeks out like-minded kids from around the world—near-death and UFO experiencers and channelers, all with genius minds. Quickly, the teens prove their psychic potential traversing space and time. Their every move is studied at a secretive lab whose very walls amplify their natural psychic powers, turning them into psychedelic, superhuman spies.

Bowen’s Heart offers a deeply vulnerable view of how chronic illness impacts an entire family. It follows eight-year-old Bowen Hammitt through his third major open-heart surgery, as his parents struggle with the hope that the surgery could make his life better and the knowledge that it could make things much worse.

Watch a new trailer for the film below.

EXCLUSIVE: Deadline has an exclusive trailer for the documentary Living Wine, directed and produced by Lori Miller, which Abramorama is releasing in theaters and on its Watch Now @ Home platform on July 15.

Living Wine follows the journeys of an entrepreneurial group of Northern California winemakers, willing to buck the conventional system and work with the grapes, soil and conditions that vary from year to year to create truly unique and natural wines that capture the taste from where they were grown. Equal parts farmer, winemaker and artist, they stay true to their ideals of creating exceptional wines made through innovative sustainable and regenerative farming and without chemical additives. Eschewing the industrial agricultural practices of the corporate wine industry, our winemakers are healing the very environment they are surviving—i.e., a changing climate marked by rising temperatures, shorter growing seasons, and more frequent and virulent wildfires.

The doc spotlights such winemakers as Megan Bell of Margins Wine, Gideon Beinstock & Saron Rice of Clos Saron and Darek Trowbridge of Old World Winery, as well as such wine experts as Elizabeth Candelario (Mad Agriculture) and Dr. Timothy LaSalle (Center for Regenerative Agriculture). Watch the new trailer for Living Wine below.

EXCLUSIVE: We also have a new trailer today for Tyler Riggs’ drama God’s Waiting Room, which Gravitas Ventures will release across digital and VOD platforms on July 8.

The film centers around Rosie (Nisalda Gonzalez), who is fresh out of high school and tired of a dull existence in central Florida. When she meets Jules (Matthew Leone), a hustler transplant from New York, life beings to spark. At the same time, Brandon (Riggs), a man with a scarred past, struggles to find his place in the world after spending more than a decade in prison. The storylines interweave as the three characters are faced with choices that could lead to violent consequences.

God’s Waiting Room made its world premiere at last year’s Tribeca Film Festival, there winning Leone the U.S. Narrative prize for Best Actor. Riggs’ second feature, Peace in the Valley, is premiering at Tribeca this year. The new trailer for his first film can be found below.

EXCLUSIVE: Director Becky Hutner has unveiled a new clip from her feature documentary Fashion Reimagined, which is likewise making its world premiere at this year’s Tribeca Film Festival.

The film’s subject is designer Amy Powney of cult label Mother of Pearl, who is a rising star in the London fashion scene. Raised off-the-grid in rural England by activist parents, Amy has always felt uneasy about the devastating environmental impact of her industry. When she wins the coveted Vogue award for Best Young Designer of the Year, which comes with a big cash prize, Amy decides to use the money to create a sustainable collection from field to finished garment, and transform her entire business. Over the following three years, her own personal revolution becomes the precursor of a much bigger, societal change.

EXCLUSIVE: Panoramic Pictures has unveiled a new clip from its horror pic The Righteous, which Arrow Films is releasing in the U.S. and UK via its SVOD service Arrow on June 10.

The first feature written and directed by actor Mark O’Brien (61st Street) tells the story of Frederic (Henry Czerny), a grieving man struggling with his faith, who helps an injured young man, Aaron Smith (O’Brien), who stumbles onto his property one night, claiming to be lost in the woods. Frederic and his wife (Mimi Kuzyk) invite the man to stay for the night, but Frederic soon begins to have doubts about this enigmatic stranger’s story – and his motives for being there. When Aaron asks Frederic to commit an unspeakable deed, it becomes clear that the man is not who he seems, and has been sent to test the very limits of Frederic’s existence.

Vortex is distributing the award-winning, black-and-white genre film in Canada. Watch the new clip from it below.

EXCLUSIVE: Our final Briefs clip of the week comes from Danny Cohen’s documentary Anonymous Club—an intimate chronicle of the life of Grammy-nominated singer-songwriter Courtney Barnett, which Oscilloscope will begin rolling out in theaters on July 15th.

Shot on vivid 16mm film over a three-year period, Anonymous Club follows the notoriously shy, Melbourne-based musician’s ups and downs on one of her world tours. Featuring Barnett’s unguarded narration from her audio diary, recorded on a dictaphone provided by filmmaker Cohen, the film delivers frank and unprecedented insight into its subject’s creative process, the sacrifices and inner conflicts set in motion by fame, and the sometimes dark backdrop to her whimsical, relatably poetic compositions.

Anonymous Club made its world premiere at the 2022 SXSW Film Festival. Watch the new clip from the doc below.

EXCLUSIVE: Actor-director-choreographer Breton Tyner-Bryan will bring her short film Delusione to Dances with Films for its L.A. premiere on June 17. The screening will take place at TCL Chinese 6 Theatres at 5 p.m.

The film starring Tyner-Bryan and Emily Ulrich is an ethereal exploration of two characters entering and exiting one another’s lives. It follows dancers as they explore an empty vintage hotel filled with memories that probe the depths of their shared past. Michael J. Burke produced the pic written by Tyner-Bryan, who also served as EP. Tickets to its festival screening are available now.

EXCLUSIVE: Heading to Dances with Films for its world premiere is director Derek Diorio’s foul-mouthed comedy, Happy F’K’IN Sunshine, which will screen at the TCL Chinese Theatres on June 10th at 9:30 p.m.

The film from Other Animal Entertainment tells the story of Ronnie Weston (Mattea Brotherton) and her brother Will (Matt Close), who live in a one-mill town. When the mill workers go on strike, the future for their family looks bleak. Fortunately, Ronnie has found a brisk business selling weed. When Will wants to start a band, Ronnie uses her weed profits to buy Will an electric guitar. Against everyone’s advice, Will enlists local outcast Artie Porter (Dana Hodgson) as his bass player. Artie spends his days partying with heavy metal icons and getting fellatio from rock and roll legends – or so he says. Artie’s lies cause instant conflict within the band, especially with Vince (Connor Rueter), the egotistical lead singer. But the musical chemistry is undeniable, and Will feels that his band just might hit the big time. If they can survive their dying town…and each other.

Travelers endure more than 1,300 domestic flights cancelations over the weekend