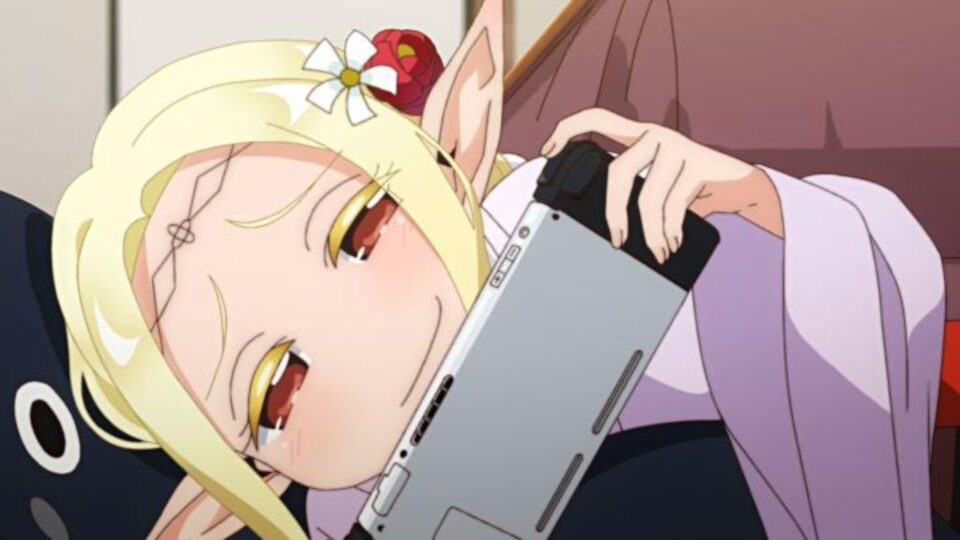 Shrine Gods have a typical image of being unattached entities who have a wise aura around them. Upcoming anime, Otaku Elf, will toss those estimations into the dustbin with its immortal elf Goddess who loves nothing more than gaming and worldly entertainment.

This shut-in elf, Elda, loves games, character models, Edo-era food, and everything that weebs like. So when a new high priestess gets appointed, she realizes that dealing with an otaku elf is way beyond her job description.

The Otaku Elf manga has been greenlit for an anime adaptation. Although the release date hasn’t been announced yet, you can still expect it to be out by next year or maybe fall 2022.

In the latest trailer for the anime, you can see the moody elf and Koito, the new high priestess.

You must have understood by now that handling this elf is a job for a babysitter rather than a priestess. She is so into otaku culture that traditional offerings are useless to her.

Koito, on the other hand, acts as the foil to Elda. She is a high schooler who works at the shrine and is very particular about her duties. The anime will more or less show how Koito brings the immortal out of her comfort zone.

You should also check out the new visual, which shows both the main characters with some pop-culture items behind them.

Cast members behind both the protagonists have been revealed as well:

Otaku Elf is a relaxing comedy set in a shrine of Takamimi. With a shy elf and a cute shrine maiden, I’m sure it will snatch quite a few hearts on its debut.

The Otaku Elf manga by Akihiro Higuchi was launched in the Shounen Magazine Edge in 2019. It is also greenlit for receiving an anime adaptation.

In the Takemimi Shrine resides an immortal elf who loves games. So, when the new high priestess, Koito, enters the shrine, she realizes that Elda has no interest in blessing people and simply wants to play all day long. The series follows the duo as Koito tries her best to make Elda perform her duties.


Sometimes we include links to online retail stores and/or online campaigns. If you click on one and make a purchase we may receive a small commission. For more information, go here.

A grandma by heart who loves to knit, sketch, and swing in parks. Binge-reads a massive amount of manga from psychological to shounen-ai. Either awkward or salty, there’s no in-between.

Connect with me:
[email protected]

Adele Returned to the Stage in Glamorous Style