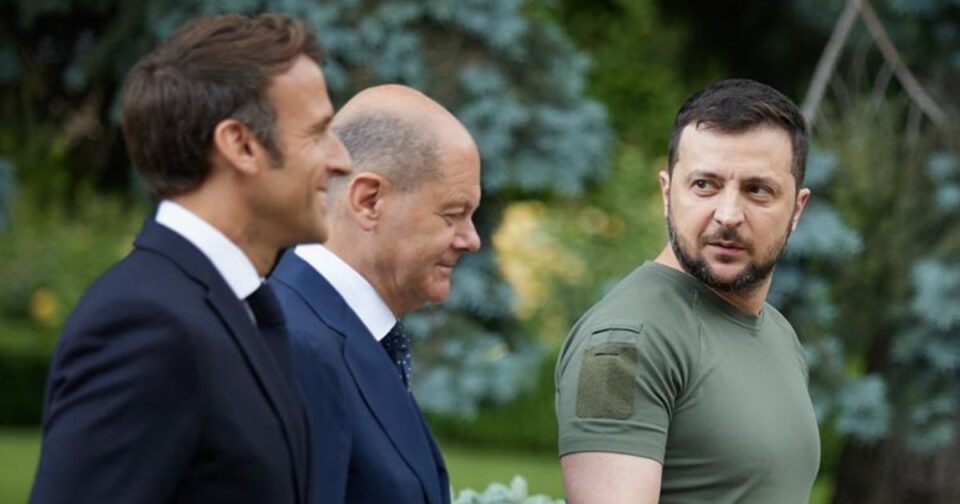 The executive arm of the European Union recommended Friday that Ukraine be granted candidate status to one day join the 27-nation bloc.

The promise of membership in a union created to safeguard peace on the continent holds deep symbolism for the nation at war. But it is only the first step in a process that could take decades.

In another show of Western support, British Prime Minister Boris Johnson arrived in Kyiv to meet with President Volodymyr Zelenskyy to offer continued aid and military training, adding that evidence points to Russia “taking heavy casualties” in the invasion.

His trip followed one a day earlier by the leaders of Germany, France, Italy and Romania, who vowed to support Ukraine’s fight without asking it to make any territorial concessions to Russia.

“We are with you to give you the strategic endurance that you will need,” Johnson said on his second visit to the country since the Feb. 24 start of the war. Although he did not detail the aid, he said Britain would lead a program that could train up to 10,000 Ukrainian soldiers every 120 days in an unspecified location outside the country

The latest embrace of Ukraine by its European allies also marks another setback for Russian President Vladimir Putin, who launched his war nearly four months ago, hoping to pull his ex-Soviet neighbor back into Russia’s sphere of influence.

The European Commission’s recommendation that Ukraine become a candidate for membership will be discussed by leaders of the 27-nation bloc during a summit next week in Brussels. The war has increased pressure on E.U. governments to fast-track Ukraine’s candidate status.

But the process is expected to take years, and E.U. members remain divided over how quickly and fully to open their arms to new members.

Support for Ukraine from Western countries — both political and military — has been key to its surprising success in the face of larger and better equipped Russian forces. Zelenskyy has also clamored for more immediate support in the form of more and better weapons to turn the tide in the country’s eastern Donbas region.

Russia pressed its offensive there Friday, leaving desperate residents struggling to make sense of what the future holds for them.

“We are old people, we do not have a place to go. Where will I go?” asked Vira Miedientseva, one of the elderly residents grappling with the aftermath of an attack Thursday in Lysychansk, which lies just across the river from Sievierodonetsk, a key focus of battles in recent weeks that Russians have nearly captured.

After a series setbacks early in the war, including the failure to seize Ukraine’s capital, Russian forces have switched their focus to the Donbas, pressing a grinding offensive. In recent weeks, they have moved in on Sievierodonetsk and surrounding villages — the last pocket of the Luhansk region not yet claimed by Russia or its allies.

“The Russians are pouring fire on the city,” said Luhansk Gov. Serhiy Haidai. “It’s getting harder and harder for us to fight in Sievierodonetsk, because the Russians outnumber us in artillery and manpower, and it’s very difficult for us to resist this barrage of fire.”

The constant shelling made it impossible for 568 people, including 38 children, sheltering in the Azot chemical plant in the city to escape, he said.

Russian forces have destroyed all three bridges leading out of the city, but Haidai said it still had not been fully blocked off.

This EV charging tech does the job as you drive

The One Thing Ryan Reynolds Says Hollywood Has Taught Him About Business Marketing: Storytelling

Snapchat will let parents see who their kids are chatting with