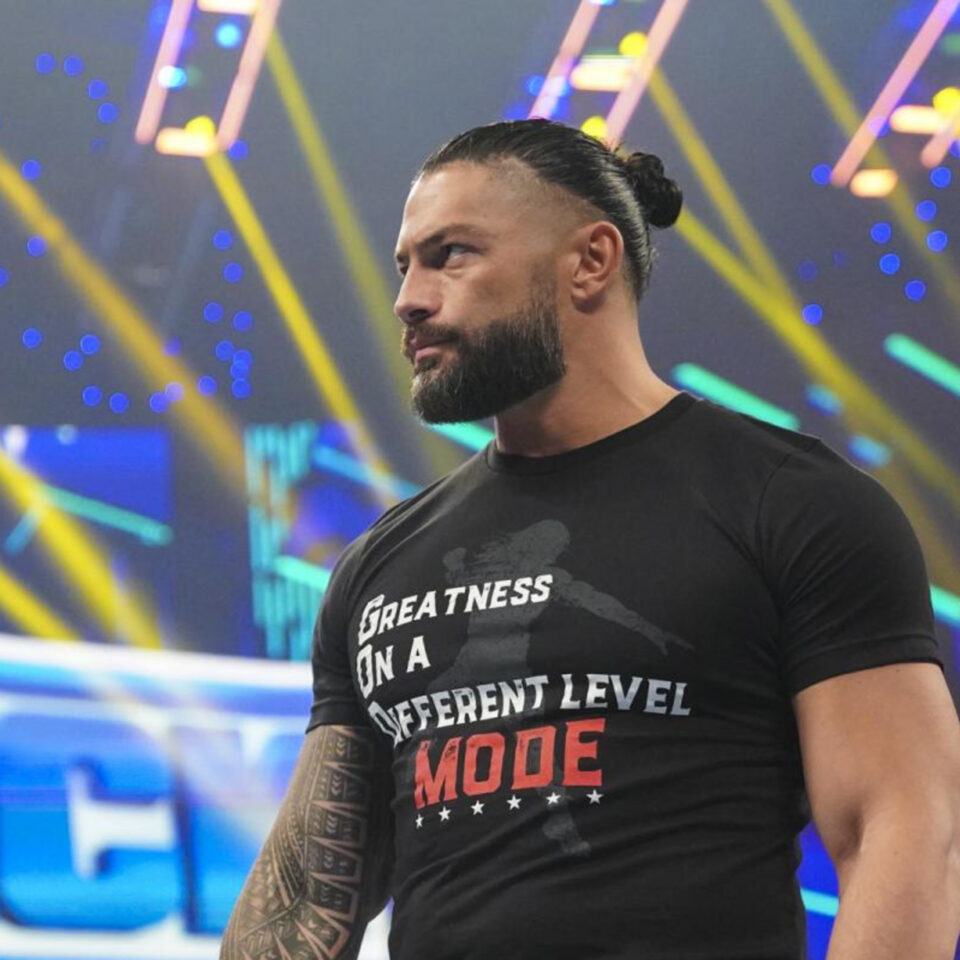 For the first time since unifying the top two prizes in sports entertainment at WrestleMania 38, Roman Reigns put his Undisputed WWE Universal Championship up for grabs against Riddle in the main event of Friday Night SmackDown.

The return of The Head of the Table to the squared circle was not even the most noteworthy occurrence on the show as Vince McMahon made his presence felt amid an off-screen investigation into alleged misconduct.

What did McMahon have to say to the WWE Universe, and was Reigns able to retain his championship against a very game Riddle?

Find out now with this recap of the June 17 Fox broadcast.

“No Chance in Hell” played and Mr. McMahon powerwalked his way to the ring before cutting the most anticlimactic promo of all time. Reflective of the product at times, it was a bunch of hype for absolutely nothing.

Riddle entered the arena next for a promo on Roman Reigns and their Undisputed WWE Universal Championship match later in the show. WWE’s production team, knowing better than to leave the heavy lifting of the promo up to The Original Bro, aired an admittedly strong video package to put the main event over.

An ode to Randy Orton and a fiery conclusion wrapped up a promo segment that went entirely too long for Riddle to carry on his own. This badly needed Reigns, Paul Heyman, The Usos, Shinsuke Nakamura, Sami Zayn or literally anyone else to help elevate it.

Riddle’s unabashed love for Orton is fun, and he did reveal that the future Hall of Famer will undergo surgery soon, but this definitely felt like an entire segment that could have been condensed to a backstage promo with Kayla Braxton rather than something out in front of the audience.

F for the McMahon appearance, C for Riddle’s promo

The pop for McMahon upon his entrance was…a choice. Riddle vowed to play Orton’s “Voices” theme if (and when) he wins the title in tonight’s main event.3 of 6

The match billed for a week as the first-ever Last Laugh match was, in reality, just another singles bout between Madcap Moss and Happy Corbin. There was no special stipulation, nor was there any increased intensity based on this being a feud-ender.

Instead, it was a basic match that saw Corbin dominate, only for Moss to fight his way back and end things with two consecutive Punchline finishers.

The match was fine for what it was, and the crowd was hot, but there was no reason whatsoever for this to exist. The feud ended at Hell in a Cell, with Moss’ definitive victory over Corbin, but WWE opted to run it into the ground with one more showdown.

The post-match confrontation between Corbin and Pat McAfee suggests there might be a match between the two sooner rather than later. And therein lies the problem: We know what Corbin is up to next, and that feud will generate considerable attention across social media. But what about Moss?

Where does the guy who was decisively booked to win the feud go from here?

Perhaps that was the question WWE Creative should have answered here.

At least McAfee vs. Corbin will be creative gold from a promo standpoint if nothing else.

Samantha Irvin announced Moss from Minneapolis, drawing a huge ovation and ensuring a certain level of heat for the match throughout.McAfee compared Corbin to Jurassic World: Dominion, claiming both believed they would be bangers but were, in fact, not.
After the match, Corbin cut a promo on McAfee, taking exception to his weekly criticisms. “Will you help me laugh this jabroni the hell out of Minneapolis, Minnesota?!” McAfee implored the audience. 4 of 6

New Day battled Jinder Mahal and Shanky next in a match that had nothing to do with elevating the tag team division and everything to do with presenting the new dancing element of the latter’s persona.

The action was nondescript before Xavier Woods played his trombone, motivating Shanky to stop beating on Kofi Kingston and begin dancing. From there, Kingston rocked Mahal with Trouble in Paradise for the pinfall victory.

A bigger indictment of this segment than the ridiculous dancing nonsense? The fact that there were two former WWE champions involved (Kingston and Mahal) and neither was treated like one. Everyone, including the big man, is better than this.

This was bad comedy and a sub-par match, all in the name of getting over a gimmick that is about as entertaining as watching paint dry.

At least there is some creative effort put into Shanky. The same cannot be said about half of the locker room.

Natalya cut a backstage promo touting the Sharpshooter she applied to Ronda Rousey last week, revealing the SmackDown women’s champion is not there tonight and vowing to win the title when they clash. New Day entered, then there was a SmackDown rewind clip from 2002. Mahal and Shanky arrived, and the show went to a second commercial break, all before the match ever started. All said and done, New Day was in the squared circle for approximately one whole “Edge vs. Randy Orton WrestleMania 36 match” before the bell ever rang.Woods played the Final Fantasy theme and Shanky danced. Insert cringe emoji here. 5 of 6

WWE official Adam Pearce joined Drew McIntyre and Sheamus in the squared circle to reveal which of the combatants will join Seth Rollins in the Money in the Bank ladder match on July 2.

After some brief back and forth, Pearce named Sheamus to the match. A brawl broke out, and after cooler heads prevailed, McIntyre was also named to the match.

So…this was a segment that happened and definitely could not have been reserved for a quick backstage vignette.

With that said, McIntyre and Sheamus are great additions to a match that already touts Rollins and figures to add Superstars like Kevin Owens and, maybe, Sami Zayn to the fold. Say what you will about the summertime state of WWE Creative, but the talent, as always, is extraordinary and will make up for it with a fascinating bout.

Raquel Rodriguez sought to cash her ticket to Money in the Bank in a qualifying match, battling Shayna Baszler while Lacey Evans watched from the commentary position. The winner of the contest would join Evans and Raw’s Alexa Bliss and Liv Morgan in the match.

The competitive match concluded with Rodriguez fighting through the challenge of The Queen of Spades to put her down with the Tejana Bomb for the win.

The outcome was obvious, sure, but it was the right one. The competitors are clearly trending in two different directions, with Rodriguez appearing to be one of WWE Creative’s key projects. A win here and her addition to the Money in the Bank match elevate her at a time when the company needs stars.

There will be some who question the company’s inconsistent utilization of Baszler, and with good reason, but that is a task akin to pushing a boulder up a hill. Instead of revisiting it, take solace in the fact that the company is attempting to create a new star, something it could stand to do more often.

C- for the Sheamus-McIntyre nonsense; C+ for Rodriguez’s win

“I wear a black tank top every day. I don’t look like that,” McAfee said of the jacked Mcintyre.Evans’ excitement over Rodriguez winning was a nice insight into her competitive nature. Fans can get behind that aspect of a character.6 of 6

Roman Reigns returned to SmackDown for the first time in a month for his first defense of the Undisputed WWE Universal Championship since winning it at WrestleMania 38. His opponent, Riddle, entered with momentum on his side.

The Tribal Chief rocked the overzealous challenger with a big uppercut and proceeded to seize control of the match. A Floating Bro by Riddle earned him a dramatic near-fall, but Reigns regained control of the bout.

Riddle fought his way back into the match, utilizing the trademark offense of Randy Orton to fuel his comeback. The resilient competitor kicked out of the Superman Punch then countered a spear into an RKO. When that did not put The Head of the Table away, he took to the air off a springboard. Reigns caught him in mid-flight with the spear to secure the win and successful title defense in a great match.

Then, in an unadvertised surprise, Brock freaking Lesnar returned to smash, crush and F-5 The Bloodline and prove that, clean loss or not, his issues with Reigns are far from settled. Also, WWE has no other marquee match at its disposal to help fill a stadium, so it is going back to the well with that particular showdown.

Given the lack of available stars thanks to injury, there are worse choices, especially when factoring in the possibility that Seth Rollins could win Money in the Bank and recreate WrestleMania 31 all over again.

Not only does every contest in which Reigns appears carry that big-fight feel, but there seems to be this need to perform up to the level of the current, full-time competitors he clashes with. We saw it with Riddle here, but his best matches as champion have consistently come against the likes of Seth Rollins, Finn Balor and Jey Uso. He even had a really fun TV match with Montez Ford last September.

This was no different. Reigns worked overtime, delivering a really fantastic television main event against a guy in Riddle who, like him or not, has become the workhorse for WWE. This was a coming-of-age performance for The Original Bro and a statement from Reigns to his critics that he can still deliver bangers when the moment calls for it.

The match was great, and the return was an emphatic exclamation point on the show. While it is trivial in the grand scheme of things, WWE needed to knock this out of the ballpark to help temper some of the more negative headlines that have dominated its week. It did, and now, there is at least a sense of intrigue surrounding its two summertime premium live events.

Backstage, Max Dupri flaked on introducing his Maximum Male Models, despite that angle being hyped for a week. Remember that time Sasha Banks and Naomi let the fans down by not delivering on an advertised segment?New Intercontinental champion Gunther cut a promo on Ricochet, calling him the epitome of all things wrong with America. They meet in a rematch from last week’s title bout next Friday night.”Me and Roman have had the same number of singles matches since WrestleMania,” McAfee accurately stated. “It’s a lot like the Rock Bottom, if you smell what I’m cookin,” McAfee said, continuing his brilliant night on the headset while making reference to speculation of a Reigns-Rock WrestleMania match next year in Los Angeles.The near-fall off the RKO was a great false finish and one that both Riddle and Reigns should be proud of.
Read More

UFC Austin: Joe Lauzon out of fight with Cowboy Cerrone due to ‘freakiest weirdest thing’