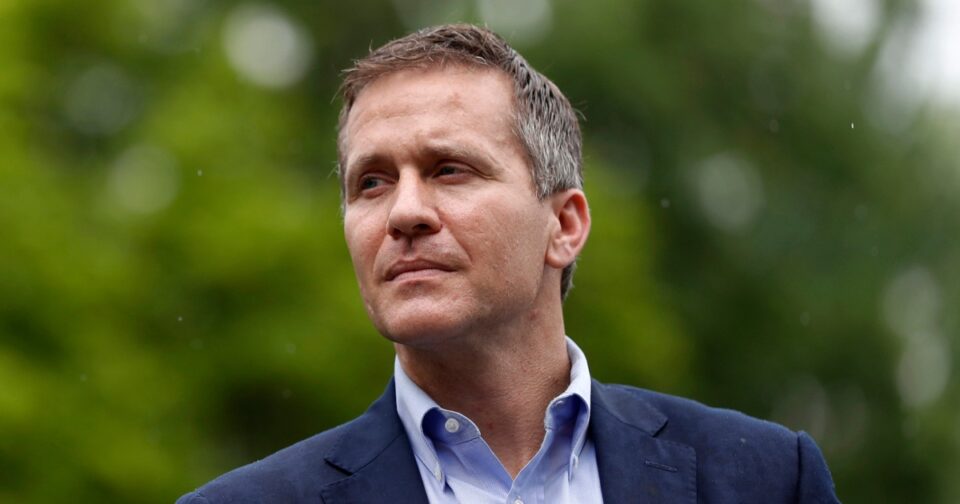 Eric Greitens, the embattled former Missouri governor-turned-GOP Senate candidate, released a campaign ad Monday in which he and a group of armed men in tactical gear are on the hunt for “RINOs” – Republicans in name only.

“We’re going RINO hunting,” a shotgun-toting Greitens, with a handgun holstered at his side, says before bursting into a house with the men in tactical gear, one of whom throws what appears to be a flash-bang grenade.

“Get a RINO hunting permit. There’s no bagging limit, no tagging limit and it doesn’t expire until we save our country,” he says at the end of the video, which encourages donors to pay $25 for a “RINO hunting” sticker.

Earlier in the video, Greitens, who resigned as Missouri governor in 2018 amid a sexual misconduct scandal and a campaign finance felony charge that was later dropped, says “the RINO feeds on corruption and is marked by the stripes of cowardice.”

The video was posted on Greitens’ YouTube page, and he tweeted out a link to the ad. Hours after the tweet, Twitter put it behind a warning that said it “violated the Twitter Rules of abusive behavior,” but the site had “determined that it may be in the public’s interest for the Tweet to remain accessible.”

A spokesperson for Facebook owner Meta said, “We removed this video for violating our policies prohibiting violence and incitement.”

David Lapan, a retired Marine colonel and former Department of Defense and Homeland Security spokesman, tweeted that Greitens, a former Navy SEAL, “has dishonored himself, his oath, and the Navy. This clear call for violence against his political opponents, using military images, is depraved & dangerous.”

“He is unfit for elected office & should be held accountable,” Lapan said.

The Missouri Democratic Party tweeted that the ad was “Disgusting. But not surprising.” It said it was another example of “violence, irresponsibility and reckless behavior from Greitens.”

In March, Greitens’ ex-wife alleged in court documents that the candidate had abused her and their young son while they were married, including knocking her down and confiscating her cellphone.

In her March affidavit, Sheena Greitens suggested her then-husband’s behavior resulted in his access to guns being limited.

“In the spring and early summer of 2018, Eric repeatedly threatened to kill himself unless I provided specific public political support to him; multiple people other than myself were worried enough to intervene to limit Eric’s access to firearms on at least three separate occasions, in February, April, and May 2018,” Sheena Greitens said. “As I became afraid of the escalation of physical violence in early June 2018, I begged Eric to tell me where his firearm was — one that he had purchased in January 2018 and subsequently concealed from me. He refused, saying that I was not being sufficiently ‘cooperative.’ I started sleeping in my children’s room simply to try to keep them safe.”

Greitens called the allegations “fabricated” and “baseless,” and his campaign manager said they were “outright lies.”

Greitens’ primary foes and other top Republicans in the state called for him to drop out after the allegations became public.

“If you hit a woman or a child, you belong in handcuffs, not the United States Senate. It’s time for Eric Greitens to leave this race,” Sen. Josh Hawley, R-Mo., tweeted at the time.

Greitens ignored those calls and has courted the endorsement of former President Donald Trump.

In a statement earlier this month, Greitens called Trump’s endorsement “the single, most powerful asset in the history of politics.”

“These establishment RINOs should stop trying to downplay President Trump’s immense influence and, instead, work with him to advance the America First agenda,” he said.

Trump has not made an endorsement in the race, though he has praised Greitens’ opponent, Rep. Billy Long, R-Mo.

Greitens used a similar slogan during his 2016 run for governor, when his campaign was selling “ISIS hunting” permit stickers, referring to the Islamic State terrorist group.

‘Everyone was beaten’: Ukrainians held captive by Russia recover from physical, emotional scars