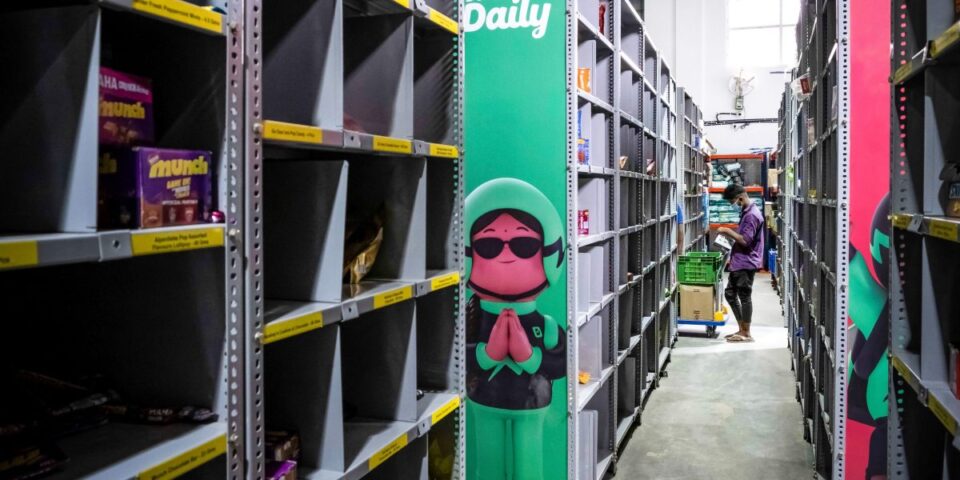 From 7 a.m. until well past dusk, seven days a week, N. Sudhakar sits behind the counter of his hole-in-the wall grocery store in the south Indian city of Bangalore. Packed floor to ceiling with everything from 20-kilogram sacks of rice to one-rupee ($.01) shampoo sachets, this one-stop shop supplies most of the daily needs for many in the neighborhood. It’s a carbon copy of the roughly 12 million family-run “kiranas” found on almost every street corner in India.

The shop is on a busy street in the Whitefield district, formerly a quiet suburb but now a major hub for the city’s booming IT industry. Apartment blocks loom behind his shop, housing hundreds of workers employed in the tech parks that dominate the surrounding area.

These days, the same technology industry that helped Sudhakar’s business thrive is presenting stores like his with a new challenge. Across the road, a steady stream of delivery drivers line up to grab groceries from a “dark store”—a mini-warehouse located in the heart of the city and built to enable ultra-fast deliveries run by Dunzo, a Bangalore-based startup.

In India’s megacities, years of aggressive marketing, steep discounts from e-commerce players like Amazon and home-grown Flipkart, and a heavy dose of covid lockdowns have gotten the urban middle class hooked on online shopping. These shoppers make up a fraction of the population, but their spending power is considerable, and in more affluent pockets of big cities, the battle for India’s street corner is well underway. Read the full story.

1 US children under five are eligible for covid vaccines from today
Meaning almost all Americans will have access to immunization. (NYT $)
+ Here’s some of the potential mild side effects they may experience. (CNN)
+ Why toddlers who’ve already had covid still need vaccines. (Time)

3 China is gathering even more personal data than we thought
Including ‘voice prints’ from the public, to strengthen its government’s authoritarian rule. (NYT $)

4 Google Search isn’t what it used to be
Wading through ads and fewer blogs make it feel more sterile and less human. (The Atlantic $)
+ A whole lot of people are Googling ‘Bitcoin dead’ at the moment. (Cointelegraph)

5 We need to be smarter about how we use AI to address climate change
Renewable energy is one area that could benefit from simpler systems. (IEEE Spectrum)
+ Renewable Energy Certificates may be overstating corporate environmental efforts. (NBC)
+ Renewables are set to soar. (MIT Technology Review)

6 Meta’s virtual reality headsets are pretty uninspiring
But the company is hellbent on making a viable headset a reality. (The Verge)
+ The metaverse is looking fairly impractical right now. (WP $)
+ It has a groping problem already, too. (MIT Technology Review)
+ Here’s why it’s important we all use the same terms when talking about it. (Fast Company $)

7 To decolonize AI, we have to unpick its very fabric
And install continual monitoring from oversight boards. (Neo.Life)
+ AI is creating a new colonial world order. (MIT Technology Review)

8 We still don’t know why the sea glows a milky green
But going into space may shed some light on the mystery. (Hakai Magazine)

9 Internet Explorer is gone, but not forgotten
Some parts of the web are still reliant on it. (Wired $)

10 Here’s what tech workers do with their swag from failed startups
Top tip: don’t get a tattoo of your company’s logo. (The Information $)

—A local man in Lockeford, California, jokes to the Washington Post about shooting down Amazon’s drones after the company launched its delivery service in the rural town last week.

Netflix v Modi and the battle for Indian cinema’s soul

Hindi film director Anurag Kashyap has developed a cult following in India since his first Hindi film, Paanch (Five), was banned for extreme violence in 2003. He has written, directed, and produced dozens of films for Bollywood. When Netflix launched in India in 2016, it hired Kashyap to co-direct its first original series, Sacred Games, about an underworld don in Mumbai who ensnares an upright police officer. As soon as Season 1 landed, it was obvious that the platform had a superhit on its hands.

The series, based on a novel by Vikram Chandra, a popular Indian novelist, starred A-list Hindi film actors. Since streaming services weren’t, at the time, subject to the rules of India’s Central Board of Film Certification, Kashyap was able to transcend the grammar of Bollywood. His characters engaged with each other naturally—they swore, they talked politics, they had sex. To viewers exhausted by Bollywood’s predictable spectacles, Sacred Games was a thrill. The series marked the first time that streaming in India became more than just another source of light entertainment, like YouTube, or a vehicle for international shows.

India is often described as the world’s largest democracy, but freedom of expression has never existed there as it does in the West. To Kashyap, Netflix represented a promise not only of wealth but, more importantly, of liberty, which is important not just to Kashyap and other filmmakers, but to the 1.4 billion people living in India. The rise of Netflix in India is a story of why technology matters: not as an end in itself, but as a means of artistic—and human—flourishing. Read the full story.