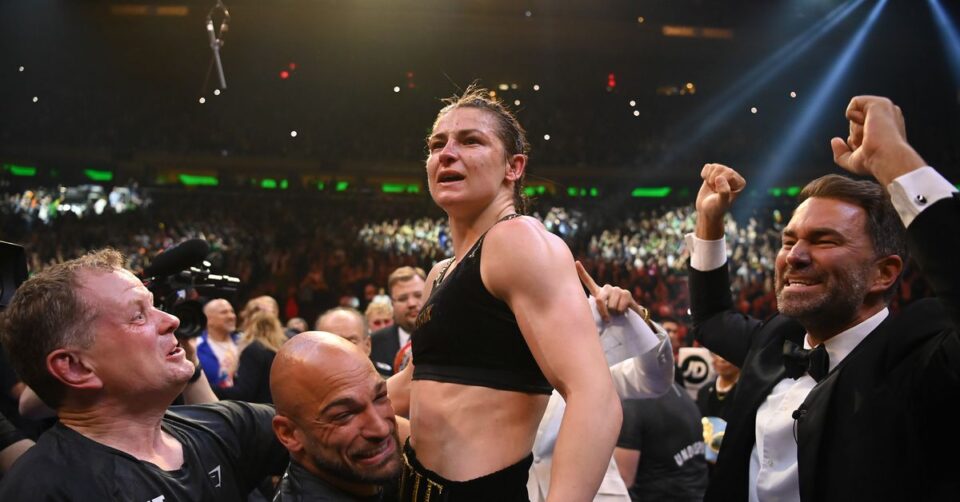 It’s far from a certainty, but Eddie Hearn is interested in having Katie Taylor face Holly Holm or Cris Cyborg next.

In April, Taylor defeated Amanda Serrano by split decision to retain her Ring, WBA, WBC, WBO, and IBF lightweight titles in the biggest female boxing match of all-time. The win moved Taylor to 21-0 professionally and, with no obvious challenges for her left in the world of boxing, Hearn says he’s intrigued by a Taylor crossover event against either Holm or Cyborg.

“There’s two fights that I find really interesting — one is Holly Holm and one is Cris Cyborg,” Hearn said Monday on The MMA Hour. “Holly Holm is a very good boxer. Cyborg can also box, has great power, doesn’t quite have the boxing résumé of Holly Holm, but they’re big crossover fights. I think Holly Holm has a fight left with the UFC, which would make that difficult to do. Cyborg I think has a Bellator agreement, but it doesn’t cross over into boxing. So just some friendly chats — she was at the show at Madison Square Garden — but no real negotiations. But definitely a fight that I would be interested in for a number of different reasons.

“Something different and fun. You get to Katie Taylor’s stage in her career and you start looking at other fights and it’s like, what can you do now? So it’s like, is it Holly Holm in Vegas or Cyborg in Vegas, or something in Dublin?”

Holm is an accomplished boxer in her own right, having been inducted into the International Boxing Hall of Fame earlier this month, and “The Preacher’s Daughter” remains interested in returning to the squared circle for a bout with Taylor.

But Holm is still under contract with the UFC, which Hearn noted makes that fight more difficult to put together.

Cyborg is allowed to pursue boxing bouts, though is still under contract with Bellator. Rumors began circulating this past weekend that a Taylor-Cyborg fight was in the works. Hearn said those rumors are premature, but he did allow that some exploratory conversations about a possible fight have taken place, and he believes that fight could be huge for Taylor and women’s boxing.

“I can say there’s a possibility,” Hearn said. “I think it’s interesting. She’s kind of done everything in boxing, and to bring in that new market to women’s boxing. The thing I don’t like about the Cyborg fight is she’s big and strong. Katie would have to go up. She would have to fight above 140, which she can’t really do, but Cyborg has a massive problem fighting Taylor because — she doesn’t mind, but in terms of the fight itself, you’re talking about a pound-for-pound great. Katie has a problem because of the strength of Cyborg. That’s what makes that fight interesting. … She’s going to be 20 pounds heavier, or close to it, on the night [of the fight].

“I just think it’s something different and Katie’s earned the right. It’s not an exhibition, it’s not like we’re just having a joke fight. These are dangerous females and it just brings a new fan base to the sport.”

Of course, the other major fight for Taylor at the moment would be a rematch with Serrano. Many believed that given the magnitude of — and close nature of — their first encounter, a rematch was an inevitability. Hearn himself said that’s the fight they were the most interested in, but revealed that Serrano’s team passed.

“Amanda Serrano didn’t want the fight,” Hearn said. “There was no amount of money, as we were told, that would get her in that fight, this time around. Particularly, probably, because the fight was slated for, and what we’d like to do, in Dublin. We went to Nakisa [Bidarian, Serrano’s manager along with Jake Paul] and said we want to do the rematch. She said, ‘No, we’re not really interested. She’s going to have another fight on Jake’s card.’ We said there’s a lot of money in the rematch [and she said], even if you offered — they gave us a number which I think was well over double the first fight — we still wouldn’t take it.

“So that’s disappointing, but I think they probably feel if they lost again, it may be career in the balance. Whereas they can go out, have a fight on the Jake Paul card, and maybe look at the rematch next year. Disappointing because it was just epic and we’d love to do it again.”

So for now, Hearn is focused on new and interesting challenges for the top pound-for-pound female boxer in the world, including those bouts with MMA royalty.

But at some point in the future, he does believe a rematch between Taylor and Serrano will eventually happen.

“I think we’ll see the rematch one day, because you get to a point where they’ll do the fight on the Jake Paul card and then be like, ‘I just can’t earn 30 percent of what I can earn against Katie Taylor, so let’s just do the rematch.’ Hopefully we can get there.”

Gina Carano responds to Ronda Rousey about potential fight: ‘It could happen’