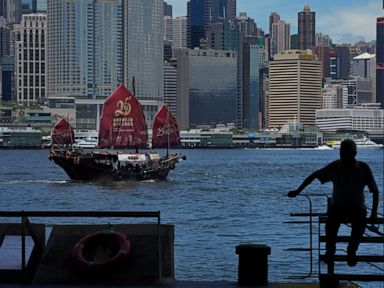 As the former British colony marks the 25th anniversary of its return to China, reeling from pandemic curbs that devastated business and a crackdown on its pro-democracy movement, Hong Kong leaders say it is time to transform again. They say the city should become a leader in technology that relies more on its ties with nearby Chinese factory cities than on global trade.

Chief Executive-elect John Lee’s government is under pressure to generate new sources of economic growth, looking beyond COVID outbreaks and anti-virus controls that have devastated tourism and business and uncertainty about the legal climate after a crackdown on the city’s pro-democracy movement.

In April, during his election campaign, Lee promised to “start a new chapter” for the city better known as one of Asia’s busiest ports and biggest stock markets and “strengthen its competitiveness” in technology and innovation as well as trade and finance.

Lee gave no details but pointed to the Greater Bay Area, a Chinese government initiative to link Hong Kong with neighboring mainland cities including the technology and finance hub of Shenzhen and the manufacturing powerhouses of Dongguan and Foshan.

“There are great opportunities in the Greater Bay Area that haven’t been realized yet,” said David Graham, executive director of the British Chamber of Commerce in Hong Kong. “It is a big opportunity for Hong Kong, and it will be very hard to replicate in other cities like Singapore or Dubai.”

Adding to the urgency for Lee to roll out a long-term strategy, executives frustrated with Hong Kong’s travel controls are leaving the city, business groups say. Some companies are moving for good to Singapore, Bangkok, Dubai or other business centers.

“Hong Kong’s strength as a global connector has been greatly reduced,” said Joseph Armas, chairman of the American Chamber of Commerce in Hong Kong. Executives have left for cities where “travel is feasible.”

Armas appealed to Lee for a “concrete roadmap” to revive Hong Kong, which remains, together with mainland China and Taiwan, one of the few places that still requires inbound travelers to serve mandatory quarantines.

For Michael Chan, who manages a fashion goods manufacturing business, the restrictions have extended what used to be one-week trips to factories in Bangladesh or China to a month or two, since it makes no sense to spend weeks in quarantine for a short work trip.

Chan has considered temporarily relocating to Singapore, whose controls are much less strict.

“When I meet government officials, I often have to meet them face to face and talk about things,” said Chan, a veteran of multiple quarantines. “It’s not like in the U.S. where I can just use Zoom for a video call.”

Hong Kong lost nearly 90,000 of its 7.5 million population in 2021, according to government figures. More than 100,000 people left in February and March of this year, during the city’s worst COVID wave.

The angst over Hong Kong’s travel controls “presents an opportunity for others to dip into our talent pool,” said Sally Wong, CEO of the Hong Kong Investment Funds Association.

Activists and foreign governments complain the ruling Communist Party is chipping away at the 50 years of autonomy Beijing promised after 1997. The freedoms afforded to Hong Kong and its leeway for self-governance had helped it keep its status as a center for Asian headquarters of global companies even as rent and other costs soared to record levels and levels of inequality grew ever wider.

Hong Kong still has a skilled workforce, an efficient port and a Western-style legal system considered to be impartial and reliable.

But its status as a global hub for trade and business center is waning.

One in 20 companies surveyed by the American Chamber of Commerce in Hong Kong plan to move their global or regional headquarters out of Hong Kong, the chamber reported in January. It said half were uncertain about whether to go.

Some businesses are watching to see how law enforcement and the free flow of information and people that are crucial to commerce and finance might change. Two out of five companies surveyed said they worry they will lose free internet access, vital for a trading center that relies on the flow of information.

“There is a perception that foreign businesses are less welcome,” the report said. “More than half our respondents feel the government is ‘unconcerned’ or ‘dismissive’ about business concerns.”

Until now, Hong Kong has been largely free of the censorship on the mainland, where internet barriers known as the “Great Firewall” are used by the ruling party to block China’s public from seeing foreign websites run by news outfits, governments and human rights activists. But the territory’s leading pro-democracy newspaper, Apple Daily, was shut down during the crackdown and its publisher, Jimmy Lai, sentenced to prison.

Kurt Tong, a former U.S. consul general in Hong Kong who is managing partner of The Asia Group, a consulting firm, said that so far the city’s national security law, though used to stifle dissent, has not had much impact on business and finance.

But the effect of the law and Beijing’s overhaul of the territory’s political system bear watching, he said.

“People who care about the Hong Kong financial system need to think about that,” Tong said.

Hong Kong thrived as the trade gateway to China for decades, but it was eclipsed as the world’s busiest container port in 2000 by facilities in the Chinese mainland. Two decades later, with cargo volume barely 10% above its 2000 level, Hong Kong’s port ranks 8th in the world. Shanghai, Shenzhen and three other Chinese ports are bigger.

Hong Kong’s stock market, once Asia’s biggest outside Japan, also has grown steadily but has slipped behind regional rivals.

Companies traded in Hong Kong have a total market value of $5.4 trillion, compared with $8.2 trillion for the Shanghai Stock Exchange. Companies on China’s second exchange in Shenzhen are worth $6.2 trillion, according to the World Federation of Exchanges.

Tong is among those who believe Hong Kong’s recent setbacks are only temporary.

“The current status is that Hong Kong is a very significant global center, one of the most important in the world, and it plays a unique and critical role in linking the Chinese economy with the rest of the global economy and channeling finance in both directions,” said Tong.

The city is meanwhile nurturing its role as a center for innovation, setting up research centers that have helped incubate dozens of start-up companies.

A vice chancellor of the Chinese University of Hong Kong, Rocky S. Tuan, pointed to medical and biotechnology research as one of the city’s less well-known strengths. Writing in the newspaper South China Morning Post, he said “Hong Kong offers access to capital, expertise, global regulatory recognition of its clinical trial data and a network of world-class universities.”

That could lend the city an edge over regional rivals.

“Other cities in the region, notably Singapore, perhaps will be more of an Asia hub or Southeast Asia hub,” said Tommy Wu of Oxford Economics. “Hong Kong’s business will be mainly focused on Greater China.”

Has the obsession with Alabama #RushTok gone too far? Viewers don’t think so.