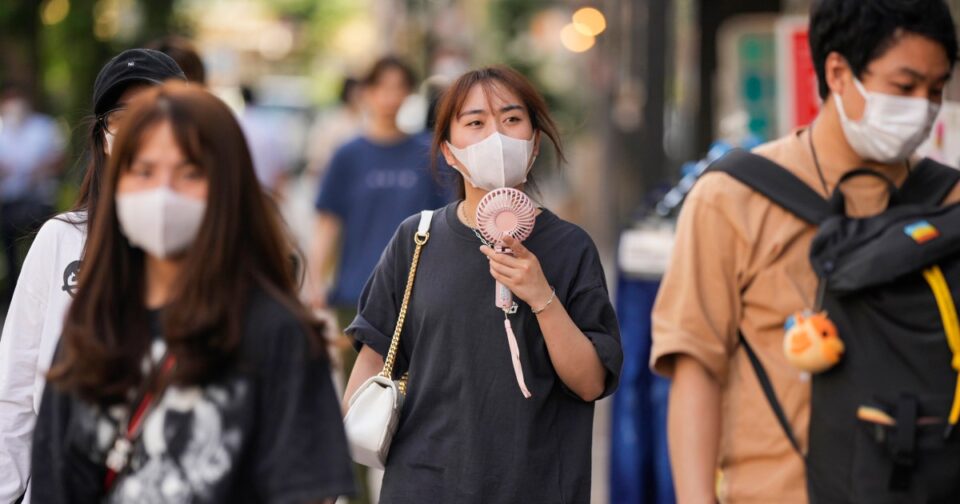 Millions of people in Japan are sweltering under oppressively high temperatures in the latest early-season heat wave to strike in the month of June.

Every continent in the Northern Hemisphere saw heat records in the last 30 days — a worrying trend given that the typical hottest months of the summer are still to come for North America, Europe and Asia. The punishing heat is also yet another indication of the intensifying consequences of climate change that are already playing out across the globe.

Temperatures on Monday hit nearly 95 degrees Fahrenheit in Tokyo, prompting the Japanese government to warn of possible power shortages. North of the capital, in Isezaki, temperatures soared to 104.4 degrees, becoming the highest ever recorded in Japan in June.

Last week, parts of northern and central China grappled with temperatures above 104 degrees, straining the country’s electricity supply as the demand for air conditioning spiked across several provinces, including Shandong, Henan and Hebei.

Unusually warm conditions even penetrated north of the Arctic Circle, with the Russian city of Norilsk recording a temperature of 89.6 degrees on June 23, setting a new record for the city’s hottest day in June and tying the all-time record for hottest day in any month.

Heat waves are expected to become more frequent and intense as a result of climate change. Though heat waves occur naturally in the summer, human-caused climate change is exacerbating these events because emissions of heat-trapping greenhouse gases are causing average temperatures to rise. This means heat waves are not only more likely to occur, but they are becoming more severe when they do.

A study published Tuesday in the journal Environmental Research: Climate found that human activities are linked to increases in heat extremes, with tens of thousands of heat-related deaths directly attributable to climate change. The scientists wrote in their study that the most extreme heat waves “have become substantially more likely, or even only possible at all, due to climate change.”

Earlier this month, a heat dome blanketed a large swath of the United States, fueling triple digit temperatures across the South and parts of the Midwest. More than 13 million Americans were under heat warnings and advisories for days, as soaring temperatures and high humidity set records in Illinois, Texas, Arizona, Tennessee and Louisiana, according to the National Weather Service.

Around the same time, Europe sizzled under its own heat wave. Temperatures warmer than 100 degrees were recorded in Spain, Germany, the Czech Republic and Poland. More than a dozen new all-time heat records were set in France alone in mid-June, and the World Meteorological Organization said parts of Spain and France were seeing temperatures more than 10 degrees hotter than average for that time of year.

Claire Nullis, a spokesperson for the World Meteorological Organization in Geneva, said at the time that the extreme heat was being fueled by climate change. She added that these events will continue to occur without significant cuts in greenhouse gas emissions.

“What we are witnessing today is unfortunately a foretaste of the future,” Nullis said in a June 18 press briefing.

Why eCommerce Businesses Should Use a Neobank