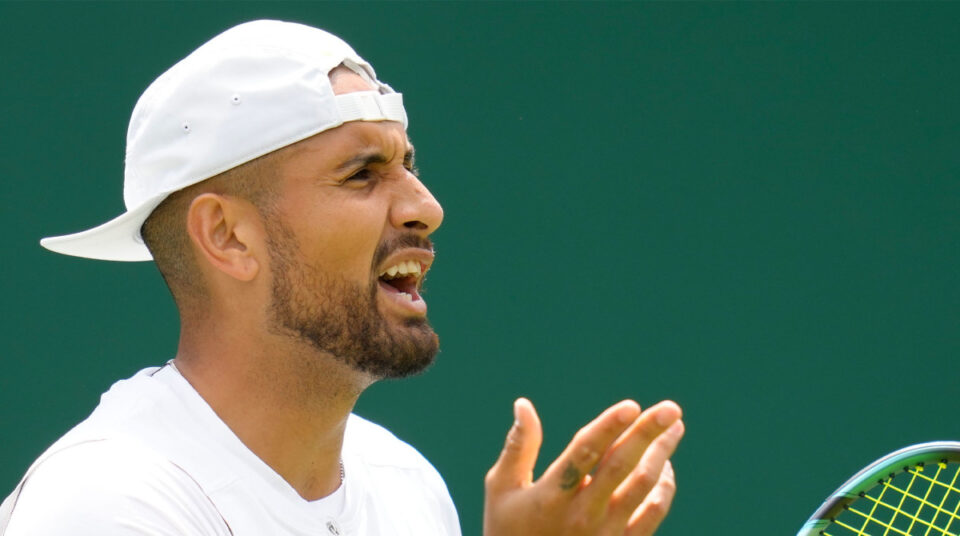 Nick Kyrgios defeated No. 4 seeded Stefanos Tsitsipas, 6-7 (2-7), 6-4, 6-3, 7-6 (9-7), on Saturday to reach the fourth round at Wimbledon for the first time since 2016. But what caught more attention than Kyrgios’s win was the back-and-forth jabs between the two during the news conference after the match.

During the heated match, the unseeded Australian called for Tsitsipas to be defaulted when the Greek star hit a ball recklessly into the stands, barely missing a female spectator, out of frustration. Even more, the chair umpire, Damien Dumusois, called three code violations in the match. One was called on Kyrgios for obscenity and two on Tsitsipas for his ball abuse that led to a point penalty.

In the news conference, Kyrgios did not hold back thoughts toward his opponent, saying he has “some serious issues.”

“I’m good in the locker room, I’ve got many friends…he’s not liked,” Kyrgios said. “Let’s just put that there.”

Meanwhile, Tsitsipas referred to Kyrgios as a “bully” and one who has a “very evil side.”

“He bullies opponents,” the 2021 French Opener runner-up said. “He was probably a bully at school himself. I don’t like bullies, I don’t like people who put other people down.”

It also did not help that the 23-year-old recently lost to Kyrgios at a tournament in Halle, Germany in June. However, the Greek star did apologize for his behavior but wishes that a “rule” could be put in place to ensure a “cleaner version” of the sport.

“Why would you be talking while you’re playing? It makes no sense,” Tsitsipas said. “Every single point that I played today I feel like there was something going on on the other side of the net. That’s his way of manipulating the opponent and making you feel distracted, in a way. There is no other player that does this. There is no other player that is so upset and frustrated all the time with something.”

Why Time Spent on Your Business Might Not Be Enough