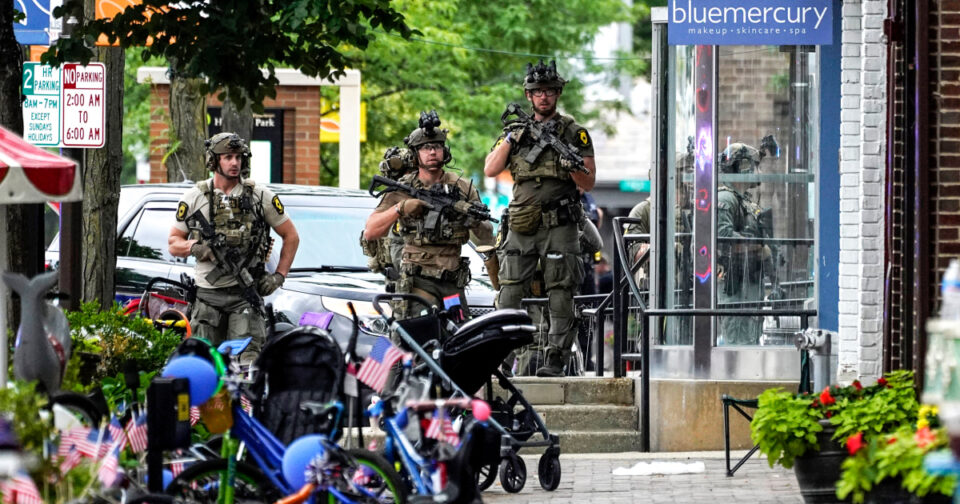 HIGHLAND PARK, Ill. —  Robert “Bobby” E. Crimo III, the person of interest identified by police after Monday’s shooting in a Chicago suburb that killed six people and wounded 38 others, left a long trail of tributes to mass shootings and public killings on social media platforms, according to numerous profiles that appear to belong to him.

Crimo performed as a rapper who went by the name “Awake,” whose recent music videos included depictions of mass murder.

Crimo’s most recent video posted to YouTube showed him in the aftermath of a school shooting. It ends with Crimo draping himself in an American flag. Another music video showed a cartoon depiction of a man wearing a shirt with his YouTube channel’s logo on it, holding a long gun and being shot by police.

The YouTube account that hosted his videos, which had previously been accessible to the public, was unavailable Monday night.

Crimo had his own Discord server, where fans and people who knew him would chat. The community featured a politics board filled with nihilistic political memes. The most recent post before the shooting, which was posted in March, was a picture of Budd Dwyer, the Pennsylvania state treasurer who shot and killed himself on live television in the late 1980s, along with the caption “I wish politicians still gave speeches like this.”

On Discord, fans would share posts that Crimo had made of himself. One apparent selfie Crimo took in March reads: “Cursed image screenshot and send to everyone or commit not alive anymore,” a reference to suicide.

After Monday’s shooting, 4chan trolls invaded the community, using it as a meeting point to laud the shooter and post memes about the attack. The Discord channel was shut down around 6 p.m. ET, just hours after Crimo was named as a person of interest.

Crimo also posted frequently to a message board that discussed graphic depictions of murder, suicide and death. His most recent post to that message board came last week, when he posted a video of a beheading.

Crimo didn’t frequently post about major political figures on his websites, except for two posts about former President Donald Trump.

A video posted to Crimo’s YouTube page on Jan. 2, 2021, appears to show Crimo among a throng of protesters cheering for Trump’s presidential motorcade outside an airport. Crimo flips the phone’s orientation to reveal his face at the end of the video.

Mark Heymann, 22, who said he went to Highland Park High School with Crimo, said Crimo was a rapper who released music when they were in school together.

Heymann said he doesn’t recall much about Crimo.“He always seemed a little off, but I can’t describe it much beyond that,” he said.

In the neighborhood, the family were known as quiet people who kept to themselves, said people who lived on the block.

Michael Gammel, who lives next door, recalled one conversation in which the elder Crimo alluded to his son having trouble at school that the father described as “emotional issues.”

Gammel and another neighbor who didn’t want to be identified recalled the younger Crimo riding around on an electric scooter with loud music playing so people knew when he came and went. The last time, Gammel said, was Monday morning about 10.

This is a developing story. Please check back for updates.

Safia Samee Ali is a reporter for NBC News Digital, based in Chicago.

Tycoon who vanished from Hong Kong is being tried in China, Canadian government says