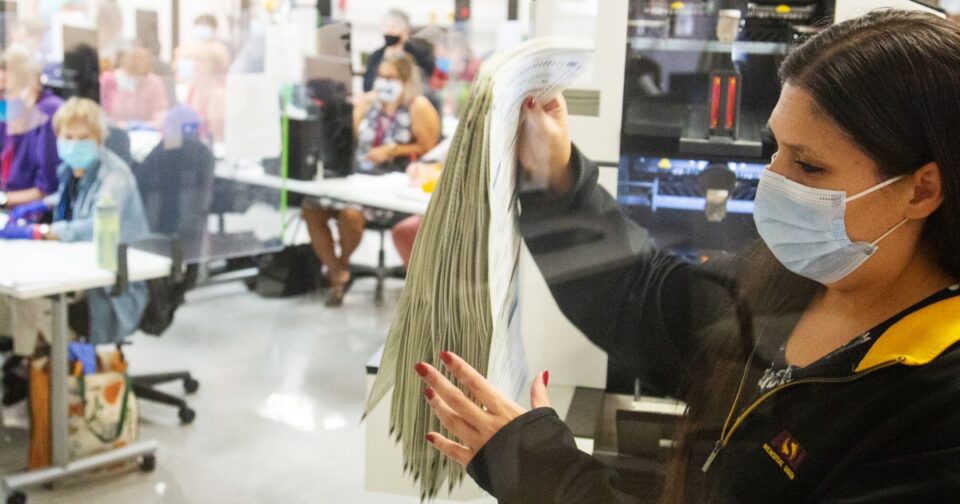 The Justice Department filed suit Tuesday to block a new Arizona law that requires proof of citizenship to vote in federal elections.

The law, scheduled to take effect in January, was passed by the GOP-controlled Legislature and signed into law by Republican Gov. Doug Ducey. It puts the onus on election workers and voters to validate citizenship before registrants can vote in presidential elections or cast ballots by mail.

Assistant Attorney General Kristen Clarke of the Justice Department’s Civil Rights Division said in a statement that the law’s “onerous documentary proof of citizenship requirement for certain federal elections constitutes a textbook violation of the National Voter Registration Act” with provisions such as “requiring election officials to reject voter registration forms based on errors or omissions that are not material to establishing a voter’s eligibility to cast a ballot.”

The new statute is also similar to an Arizona law that the U.S. Supreme Court struck down in 2013, Clarke added.

The suit describes how the attorney for Arizona legislators warned them that the bill would violate federal law and contradict the earlier Supreme Court ruling. House Speaker Pro Tempore Travis Grantham said trying again “is a fight worth having,” according to the court filing.

State Attorney General Mark Brnovich suggested the Justice Department was encouraging undocumented immigrants to vote by filing the lawsuit. “I will once again be in court defending Arizona against the lawlessness of the Biden administration,” Brnovich said Tuesday.

Since 2004, Arizona has required voters registering on state forms to prove their citizenship with documents like driver’s licenses or photocopies of U.S. passports. In 2013, the U.S. Supreme Court ruled Arizona cannot force voters who register on federal forms to also provide proof of citizenship. That means voters who do not provide such documentation are allowed to vote only in federal elections in Arizona.

Arizona Republicans have repeatedly questioned the results the 2020 presidential election, despite evidence showing they were accurate and the election was secure. The efforts included a discredited partisan ballot review, ordered by state Senate Republicans and carried out last year by a company called Cyber Ninjas, in Maricopa County, the state’s largest county by population.

Julia Jester is a 2020 campaign embed for NBC News.

DACA recipients have been living from court case to court case. They deserve better.

‘He lives forever’: Nipsey Hussle honored with a star on the Hollywood Walk of Fame

Mississippi will send back fed’s rental aid, even as housing needs remain high