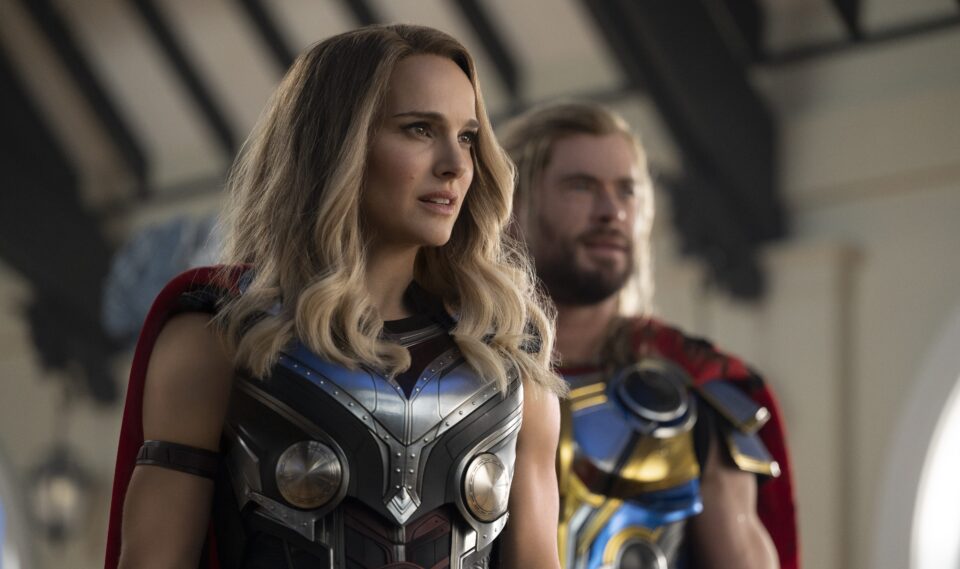 In the wake of Universal/Illumination Entertainment’s Minions: The Rise of Gru beating its $80M 4-day projection by 54% at $123M, tentpole fever at the domestic box office isn’t stopping as Disney/Marvel’s Thor: Love and Thunder is looking at a $140M-$160M start in U.S./Canada and another $150M abroad for a global debut that’s around $300M.

Oscar-winning filmmaker Taika Waititi, who reinvigorated the franchise with a sense of color and grand comedy, thus catapulting its grosses to the highest the franchise ever saw in Thor: Ragnarok‘s $122.7M domestic opening, $315M stateside final and $854M WW, is back in the director’s seat for part four. The edge this time, as first teased at San Diego Comic-Con 2019, is that Natalie Portman’s Jane Foster returns, becoming lady Thor. Oh, and the big bad guy is Gorr the Butcher played by The Dark Knight‘s Christian Bale in his MCU debut.

So far, not the best reviews for a Marvel movie, and not the worst for a Thor movie at 71% fresh on Rotten Tomatoes. Ragnarok peaked at 93% certified fresh, while 2013’s Thor: The Dark World bottomed out at 66% fresh. However, an  interesting trend that’s been going on lately, in particular with Rise of Gru and Jurassic World Dominion, is that sour RT scores haven’t weighed down on tentpoles’ opening weekends.

Should Thor: Love and Thunder blow away its projections, it’s simply because word of mouth is hot, and triggering walk-up business. While there’s two notable movies left on the summer calendar, Universal’s Jordan Peele directed sci-fi thriller Nope (July 22) and Sony’s Brad Pitt action title Bullet Train on Aug. 5, you could say Thor: Love and Thunder is the last big deal of the summer in regards to $100M-plus domestic starts; this one demo wise in the vicinity of Guardians of the Galaxy Vol. 2 which opened to $146.5M.

One of the reasons why Thor: Love and Thunder is pacing behind Doctor Strange in the Multiverse of Madness is because that film was working off the whole Spider-Man multiverse and Illuminati spoiler heat. As of last Friday, Thor: Love and Thunder presales were trailing behind Doctor Strange 2‘s by 40%. Doctor Strange 2 had banked $49M in advance ticket sales a week before opening, a number which rose to $85M by its Thursday preview night before posting a 3-day of $187.4M. Thor 4‘s ticket sales are already ahead of Top Gun: Maverick, The Batman and Jurassic World Dominion at the same point in time before their opening Friday.

Previews in the U.S. and Canada start at 3PM Thursday.

Internationally, Thor: Love And Thunder rolls into 47 material markets, repping 93% of the overseas footprint through Friday. Key markets to go on Wednesday include Germany, Korea, Australia and Italy; followed Thursday by the UK, Brazil and Mexico; and Japan and Spain on Friday. France goes next weekend timed to Bastille Day and to get away from the slew of holiday travel this coming weekend as many folks start to hit the road for the summer.

In like-for-likes and at today’s rates, Thor: Ragnarok did $124M while pandemic comps include The Batman ($105M), Top Gun: Maverick ($115M) and Jurassic World Dominion ($132M) (note that Japan has not yet opened on the latter). Doctor Strange In The Multiverse of Madness benefitted from the Spider-Man halo and did $245M overseas.

Ragnarok’s biggest offshore market was ultimately China, although Love And Thunder has not been dated there as yet (we understand it has been submitted). Rounding out the Top 5 were the UK, Korea, Brazil and Australia. Those four should again be in the Top 5 openers on Love And Thunder, likely along with Mexico.

In terms of global openings, Love And Thunder has its sights on scoring the No. 2 worldwide launch of 2022 after Doctor Strange in the Multiverse of Madness‘ $432.4M WW start.

Thor star Chris Hemsworth and Waititi were in Sydney for the Oz premiere of Love and Thunder on Monday last week.

Rise of Gru will have a steeper than expected second weekend due to those hefty $10.75M Thursday previews built into last Friday; look for a -55% decline for a $48.1M 3-day.

The Download: experimental embryos and the US monkeypox emergency

Trying to Get Verified on Social Media? Here’s What You Need to Know.

Russia ‘ready to discuss’ prisoner swap with U.S. after Griner gets 9 years in jail