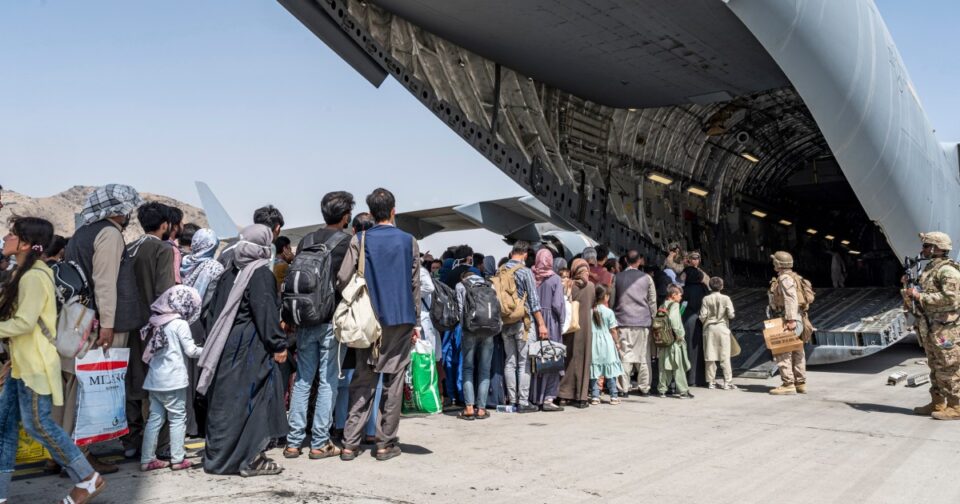 One year has now passed since former Army Capt. Jeff Trammell began exchanging text messages in the middle of the night with his one-time Afghan interpreter, desperate to get him and his family on one of the last flights out of Kabul as the U.S. withdrew and the Taliban took control of the country.

“Cover your daughters and stay in line,” he instructed.

In the months since, the Department of Homeland Security has resettled more than 80,000 Afghan refugees, the vast majority of whom escaped before the end of the U.S. withdrawal in September 2021.

But tens of thousands who wanted to leave were left behind. Trammell’s interpreter is still in hiding, too afraid to step outside for fear he and his family will be found and executed by the Taliban.

“After Americans left Afghanistan, I passed one year of my life like a prisoner. No work, no food,” Trammell’s interpreter told NBC News. At night, the family goes to their rooftop to get their only breath of fresh air for the day, he said.

Trammell says his interpreter has passed every step of the Special Immigrant Visa process that would allow him to be evacuated to the U.S., and the final step he needs to complete is an interview at an American embassy.

“The problem is there is no embassy in Afghanistan,” Trammell said, noting his frustration that the U.S. is not conducting such interviews remotely over Zoom.

For Afghans who helped American forces but were left behind after the U.S. evacuation, the past year has been marked by fear, hiding and frustration as prospects of securing a visa, let alone a flight out, have dwindled.

For those who did make it out, advocates say, their fate is still not certain.

The Biden administration admitted most evacuees on humanitarian parole, which allows for a two-year residency and work authorization. Congress has yet to pass a proposed bill that would allow more evacuees the chance to apply for a visa that would put them on a path toward permanent status and citizenship.

At a legal clinic held by refugee resettlement agency Lutheran Immigration and Refugee Service (LIRS) in Alexandria, Va., last weekend, about 50 Afghans came looking for help, worried that their ability to live and work in the U.S. could come to an end in a year.

Though Afghans in the U.S. can apply for asylum, which would give them a pathway to permanent legal status, they face a backlog of hundreds of thousands of cases from other immigrants seeking asylum. They can also apply for a Special Immigrant Visa based on their involvement with U.S. troops, but that process can take years, said LIRS President and CEO Krish O’Mara Vignarajah.

A spokesperson for U.S. Citizenship and Immigration Services (USCIS) said the agency is “streamlining the processing of requests for work authorization, Green Cards, and associated services.” The spokesperson also noted that USCIS has received over 2,400 applications for asylum from Afghans who were evacuated to the U.S., of which 250 have been approved.

“The United States has welcomed more than 80,000 Afghans through Operation Allies Welcome, providing them with support and assistance as they begin their new lives in America — and we are prepared to welcome additional Afghans over the coming weeks and months, including those who are at overseas transit locations awaiting clearance to come to the United States,” the spokesperson said.

The Biden administration also granted Temporary Protected Status for all Afghans in the United States, temporarily blocking them from deportation. But Vignarajah said there is still uncertainty for Afghans navigating the process to live permanently and work in the U.S.

“It is creating a source of anxiety,” said Vignarajah. She expects the Biden administration would not move to deport Afghans after their parole expires, but she urges Congress to pass legislation that would give them certainty should another administration challenge their ability to stay.

After the chaotic evacuation from Afghanistan followed by the long wait for asylum and Special Immigrant Visas, Vignarajah said, “They do not have complete faith that the U.S. will follow through on its promises.”

Back in Afghanistan, those still seeking to come to the U.S. are largely being denied humanitarian parole by USCIS, which has stipulated that applicants must prove they would be targeted with violence if they stay in the Taliban controlled country. As of June, 93 percent of Afghans still in the country who sought humanitarian parole had been denied, according to USCIS data.

A USCIS official told NBC News that roughly 70 percent of pending applications for humanitarian parole are from Afghans still living in Afghanistan, where the closure of the U.S. embassy in Afghanistan is “complicating the completion” of some applications that would otherwise be approved.

According to a senior administration official, as of July more than 70,000 Afghans who applied for Special Immigrant Visas before September 2021 were still in Afghanistan.

Trammell’s interpreter, who applied for Special Immigrant Visa status reserved for those who helped U.S. troops, received an email in July from the State Department’s National Visa Center telling him that it had “received all of the fees, forms and documents required prior to attending an immigrant visa interview.”

“Your petition is awaiting an interview appointment” at a U.S. embassy or consulate, said the email — though there is currently nowhere for the interpreter to schedule such an appointment.

The USCIS official said Afghans need to travel to a third country for an interview, but the interpreter fears he will be captured by the Taliban if he is caught trying to cross into Pakistan.

Despite the odds, he remains hopeful he will be able to give his daughters a future outside of Afghanistan and Taliban rule.

“Whatever I have is my daughters’,” he said. “I am so worried about their future. I don’t want to destroy my daughters’ future.”

Trammell said he knows some single men who served with American forces who were able to access visas and leave Afghanistan more quickly. But his interpreter is committed to staying with his family.

“They are all my life. I have nothing without them,” the interpreter said.

In a statement, a State Department spokesperson said, “We cannot comment on individual cases. Speaking more broadly, all visas must be processed in accordance with U.S. law, which include the requirement that immigrant visa (IV) applicants sign their applications biometrically ‘in the presence of the consular officer’ and attest to the veracity of the application through the oath administered by a U.S. consular officer.”

“While we are currently unable to provide consular services for immigrant visa applicants, including Special Immigrant Visas (SIVs), in Afghanistan, we continue to process SIV applications at every stage of the SIV process, including by transferring cases to other U.S. embassies and consulates around the world where applicants are able to appear.”

Why Trump and the GOP love Hungary’s authoritarian leader